Following the Freedom Trail in Boston 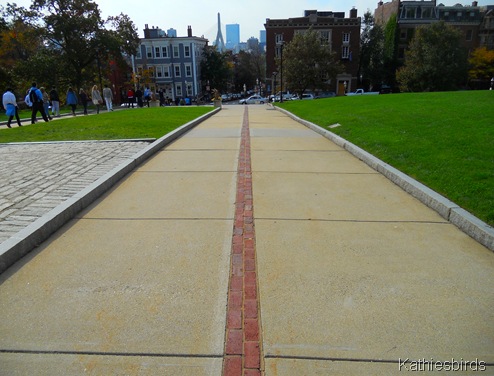 Last October my friend Kathryn came to visit me from Utah. She had never been to New England and so she was quite excited to come and I was equally excited to show her around. While Kathryn is my best and first Birding Buddy, she also likes history. So, before she came, she did some research about the area and decided that she wanted to walk part of Boston’s Freedom Trail. “What?” I asked? I had never heard of it! Since moving here I have only been to Boston a couple of times and I have never walked the streets! However, another friend of mine HAD taken me down and shown me around Charlestown, so that is where we started from with the red brick line of the Freedom Trail to lead the way. 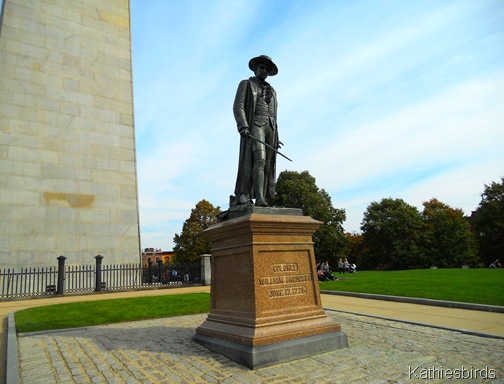 While it is expensive to park in Boston and parking spaces are few and far between, you can park around the monument for free. We found a spot and got out to see what we could see. Since I knew we would be doing lots of walking and the focus of this trip was history and not birds, I did not bring my big Nikon D80 but left it at home, opting instead for my new Nikon Coolpix, which I am still learning to use. However, you know me, I still had to bring my binoculars...just in case! 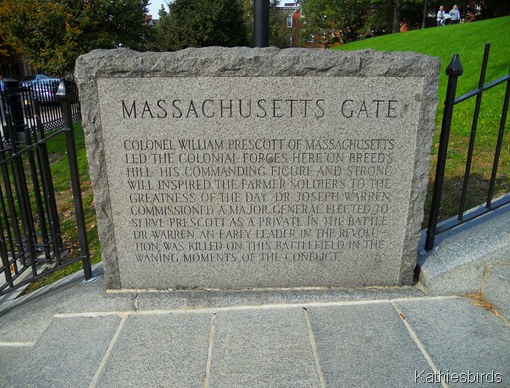 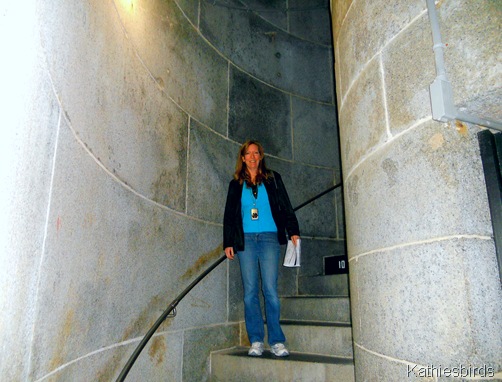 If you want to, you can climb all 294 steps to the top of the obelisk but Kathryn and I decided not to. We just went into the base and I took this picture of her standing on the steps. Since it was already after noontime we wanted to get on with our tour. One of the good things I did while we were at the monument was ask one of the park rangers about where to park and how to proceed on our tour of Boston and our walking of the Freedom Trail. Park Rangers are a wealth of information. She gave us the best advice ever! She told us we could park in a nearby parking lot down the street for half the price it would cost us to park in Boston and then we could take the water taxi across the harbor to the downtown area and walk back! Since it was a gorgeously warm day for late October we decided to take this option. And the best part of all was the fact that the water taxi only cost a couple of dollars! 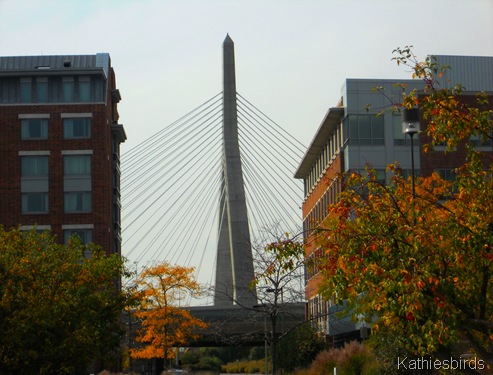 Before leaving the Bunker Hill Monument, we did go across the street to the museum so we could use the restroom since we did not know when we would find another! We walked around and looked at a few of the artifacts before going on our way. 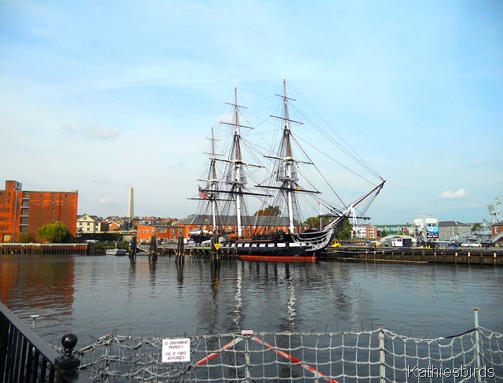 On our way to the dock to catch the water taxi we walked along the harbor where we were able to get a good look at the USS Constitution. As we walked I counted all the gulls, jays, starlings, and cormorants I saw, as well as one Osprey flying over the harbor! 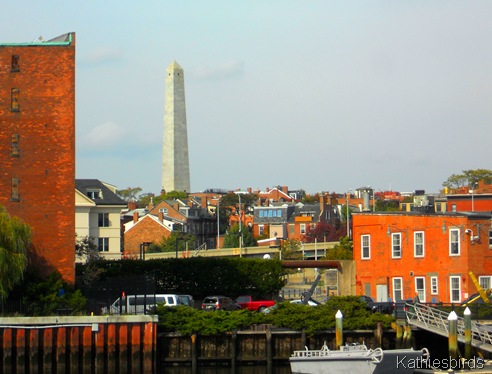 While waiting for the water taxi we saw a few more double-crested cormorants in the water as well as 6 pigeons on the dock. The wharf we waited on did not have a person in attendance and at first we were wondering if we were in the right place but soon others showed up. When the ferry came into dock we got on board and paid our fare there. 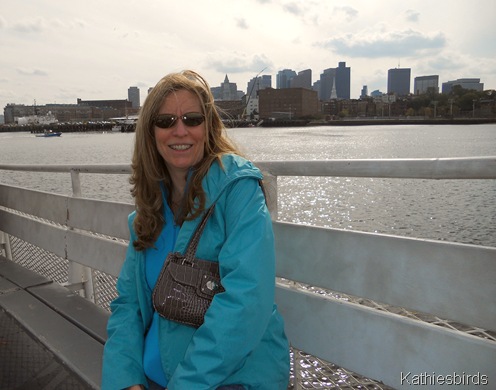 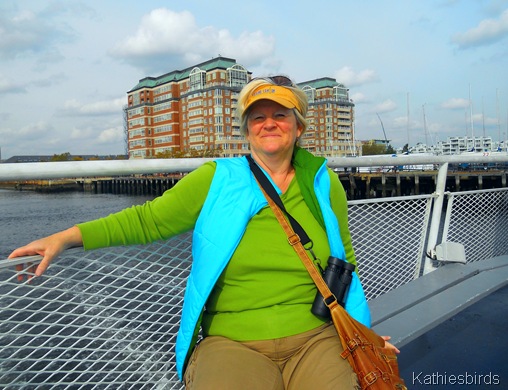 Kathie (me) riding the Water Taxi (obviously taken by Kathryn!) 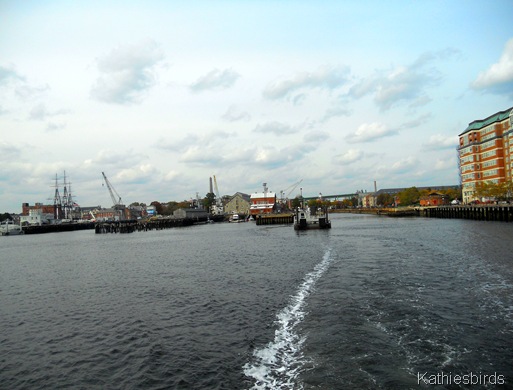 As we pulled away from the dock and the deep dark water churned up behind us the and the wind blew in our faces we were all smiles! This was so much fun! 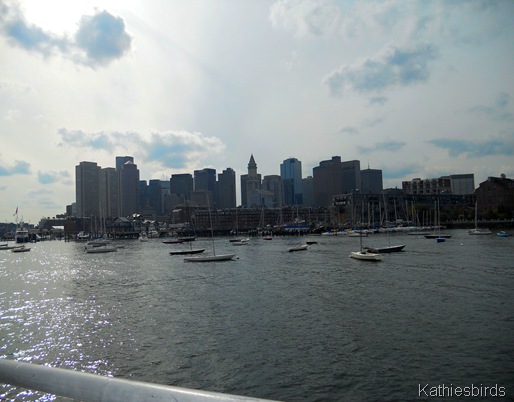 As the city came into view we just looked and looked until our eyes about fell out of our heads! I think it took us about 10 to 15 minutes to cross the harbor. We had no idea where the taxi would dock. We just knew it would be downtown. By now our stomachs were growling as it had been a long time since breakfast. Ever since Kathryn arrived she had a friend who kept telling her she needed to eat at Legal Seafoods. Kathryn loves seafood and we had already eaten it a quite a few times since her arrival at some local seafood restaurants near Andover but as the ferry pulled into port we could not believe what we saw! 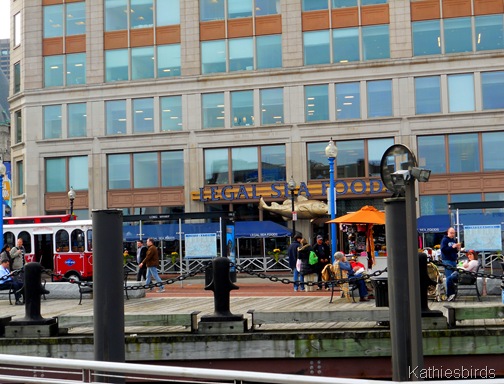 The boat was pulling up to dock right in front of Legal Seafoods! 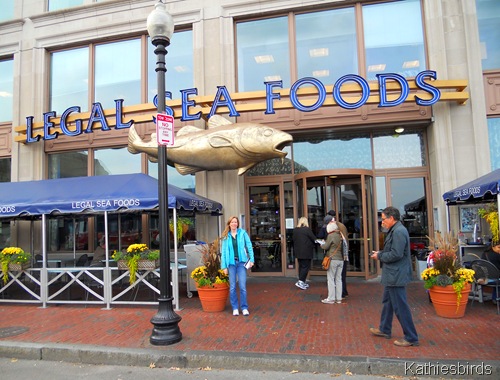 We disembarked and crossed the street. It was nice enough for us to sit outside and we both ordered clam chowder and I got a pot of hot Earl Grey Tea! The New England Aquarium is right across the street from this location but we did not visit it. We were here to walk the Freedom Trail, so after our lunch, we set off down the streets of Boston!

Since I have so many photos from this day I have divided this post into 3 parts. Click on the links below to see more of our hike along the Freedom Trail!