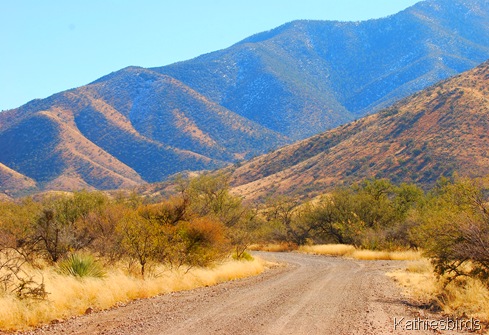 I slept in just a bit on Friday before Chris Rohrer arrived and we headed for Florida Canyon. Our hope was to find the Rufous-capped warbler which is regularly seen there. Since Chris had this week off and my husband was back at work, we took advantage of every single day. 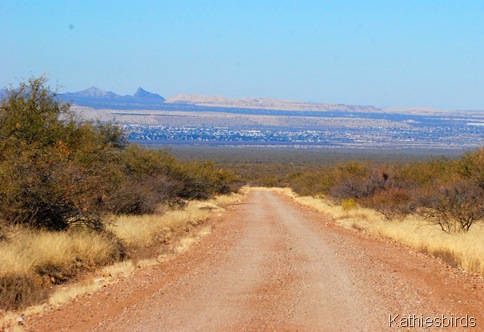 As we headed up the gravel road we pulled over to chase down a couple of sparrows was saw flitting by. Before us the canyon loomed while behind us Green Valley spread out like a quilt over the desert. Beyond it the flat wasteland from the copper mine created a straight but elevated horizon line. I often wonder what it looked like before the mine went in. 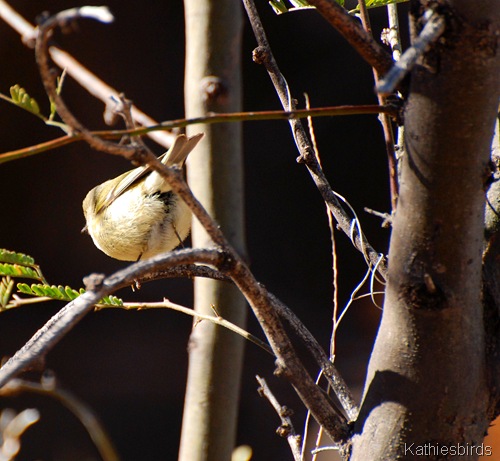 I was soon distracted from my thoughts by the flittering of a bird in the trees alongside the road. The tiny Ruby-crowned kinglet moved fast and often and all I got was a shot of its undertail coverts as it flitted away!

I must have been very tired this day, because though Chris and I started seeing birds as soon as we parked the car, I did no take many pictures! I had only been here one time before with Jeff and Dawn Fine and Chris had never been here, so I led the way following the trail as best as I could remember from over 3 years ago!Along the way we saw towhees and jays, woodpeckers and sparrows. A whole flock of black-chinned sparrows flew in and we got so excited. This was a Life Bird for Chris. I just looked through my bins and forgot to take pictures! Actually, the lighting wasn’t the best and I knew I had so many photos to offload already, so I was being very conservative with my shots! 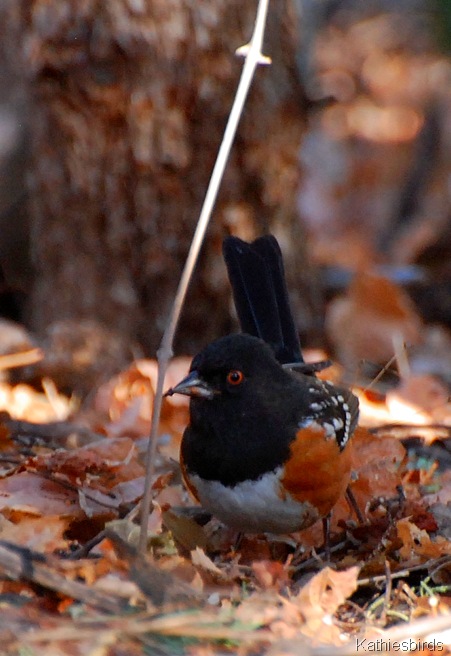 However, I couldn’t resist a shot of this Spotted Towhee when I found it.

Chris and I continued to hike up the mountain until we came to the dam. The Rufous-capped warbler is usually seen above this spot so up we climbed over the 4 foot rock wall. This is a bit tricky when one has binoculars, camera and water bottles to carry. Chris is much taller than I am and about 15 years younger so it was a bit easier for him. We walked through willows and scoured the hillsides with no luck. The elusive Rufous-capped Warbler was not to be found even though we met others on the trail who had seen it already on this day. With the afternoon wearing on we decided to head down. We still wanted to get to Madera Canyon. As we made it to the dam, Chris went down ahead of me while I held onto his camera as well as mine. The plan was that he would go down first, then I would pass all the gear to him and in that way have my hands free to grab onto things as I climbed down.  It seemed like a good idea at the time, but as I leaned forward to pass the gear down to him I got off balance and started to fall. Chris, being the gentleman that he is, reached up and stopped me from going tail over tea kettle down a 4 foot drop! However, I sat down hard on my rump with my right foot twisted under me. As I sat there and composed myself, I thought it would be my hip and thigh that were hurt the worst.  Thankfully, I have a lot of padding there, but once I stood up it became apparent that it was my right foot that was hurt the worst. No padding there where the top of my foot crunched into the rock! Thus is was that I limped down the canyon to Chris’ car where we climbed in and headed for Madera Canyon. I was very thankful at this moment that he was driving today! 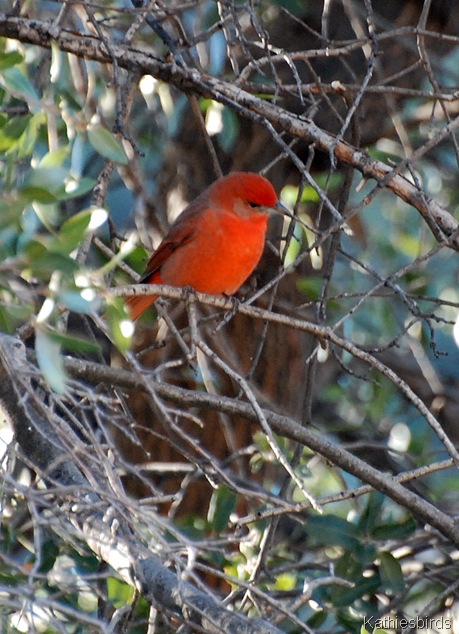 Since my foot was now hurt there would be no hiking about on trails, so Chris and I headed for the Santa Rita Lodge. They have a wonderful bird viewing area set up with benches and feeders. Numerous birds come to this spot and you can just sit on a bench and watch birds and snap photos. Though the shadow of the ridge was starting to drop lower and lower, the sun was still hitting the feeders and they were filled with sparrows, juncos, finches and jays. The clown-faced acorn woodpeckers clung to feeders and poles and a white-breasted nuthatch “yank, yanked” from the surrounding trees. When the Hepatic Tanager made its appearance everyone got excited. Then the shadow fell the rest of the way over the canyon and most of the birds and the birders disappeared. 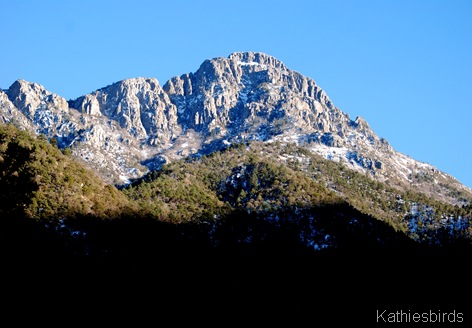 Chris and I then continued up the canyon where the sunlight was still hitting the tallest peaks. We stopped along the way to see the three Magnificent Hummingbirds at the feeders of the Madera Kubo. While the light was too dim for a photograph, we clearly saw these large and magnificent hummingbirds! 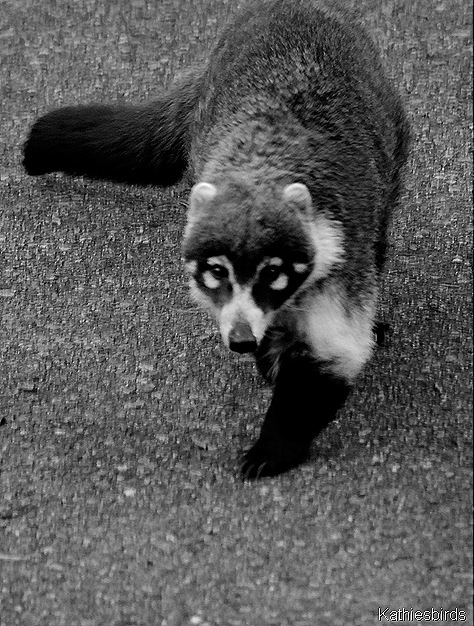 At the top of the canyon we were surprised to find a coatimundi wandering around the parking lot looking for handouts! We got so excited that we both jumped out of Chris’ car to take pictures of it. In his excitement Chris left his car door open and there were crackers that he had been eating on his seat. I saw the coati’s nose start to twitch as it sniffed out this delicious scent! It looked like it was headed straight for Chris open car door and I yelled to Chris who quickly jumped back in the car and shut the door! I was not far behind him! This creature is big! It’s as large as a large raccoon, to which it is related, and it is even longer with that long tail! I was quite happy to see one so close but I was also very careful about keeping my distance. I did not want to experience a bite! 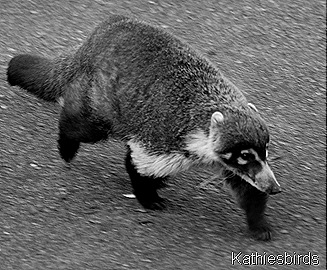 Day Four of our Big January ended with Chris and I driving back into Tucson where we had a quick stop at two local parks where we found a lone Canada Goose, 4 Western Grebes, and a small flock of Hooded Mergansers. It was yet another full day of birding.  Over the weekend Chris went off birding by himself while I stayed home and spent time with my family. On Sunday Gus and I took my son and his wife for a drive down to Tumacacori National Historic Park and Rio Rico where I managed to squeeze in a little birding time of my own as we showed them the sights!