The Big Day Continues at the Santa Cruz Flats! 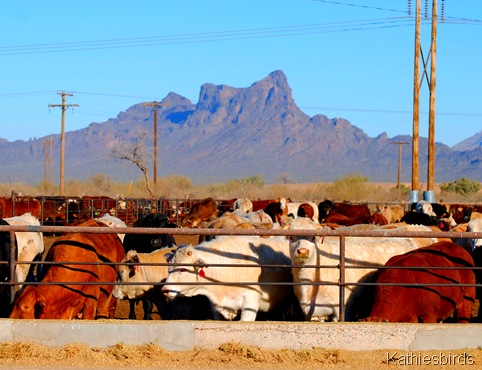 We went in search of Mountain Plovers and we found so much more. As soon as we exited I-10 we saw a large flock of Chihuahuan Ravens flying alongside the road. We followed Red Rock road through the suburban development of Red Rock until we came to the Red Rock Feedlot. Here the roads turn to dirt and you quickly realize why this area is called “The Flats!”  In and around the feedlots we saw all kinds of blackbirds and starlings. 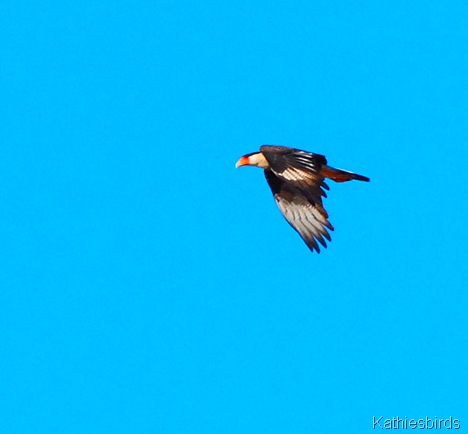 Nearby the Crested Caracaras flew! 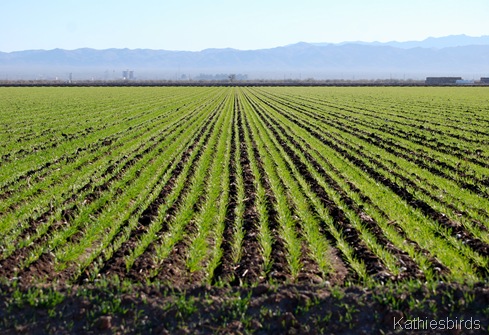 Much of the Santa Cruz Flats are agricultural fields. As we drove along we watched the rows whip by us in an ever changing pinwheel with the same vanishing point on the horizon. Usually when Chris Rohrer and I go out birding I am the person who keeps the checklist and we both spot and photograph birds. but today, since I was driving and we had such a long way to go, Chris took over list keeping while I drove and he and Rich Hoyer spotted birds. If you know me at all, then you know it was hard for me to give up control of the list! but Chris did a great job and then Rich was able to enter all the data into eBird through Bird Log, an eBird app on his smart phone as we were driving home! 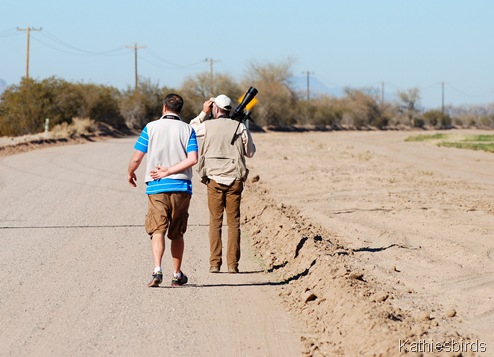 Chris and Rich searching for birds along one of the many dirt roads. 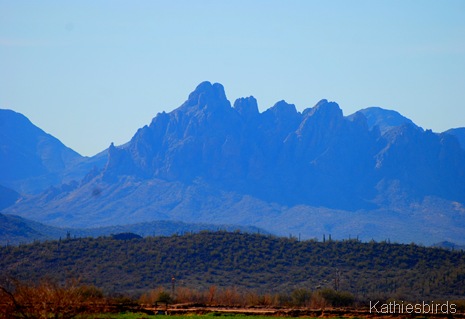 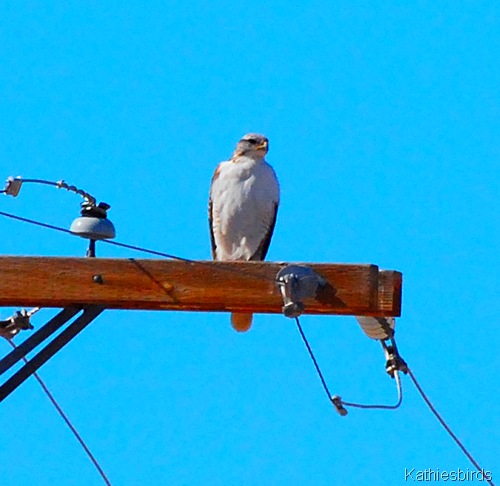 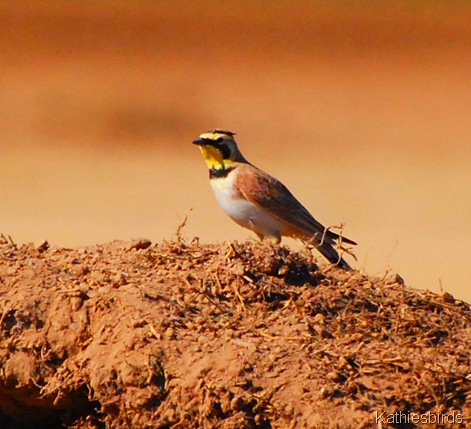 As well as Horned Larks! 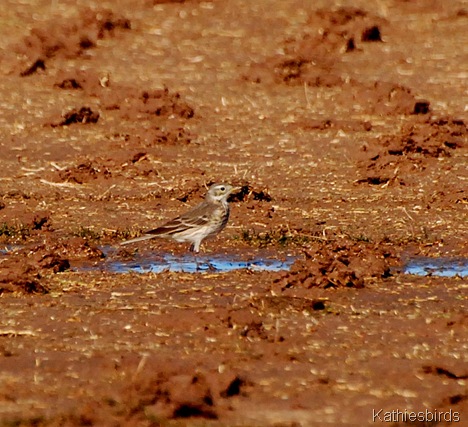 American Pipits dotted the landscape and virtually disappeared against the mud. 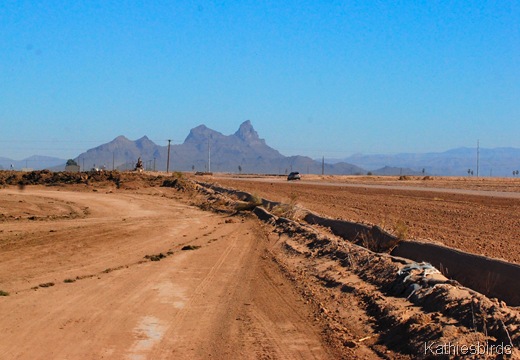 These are the roads that we were driving on. In the background is Picacho Peak. 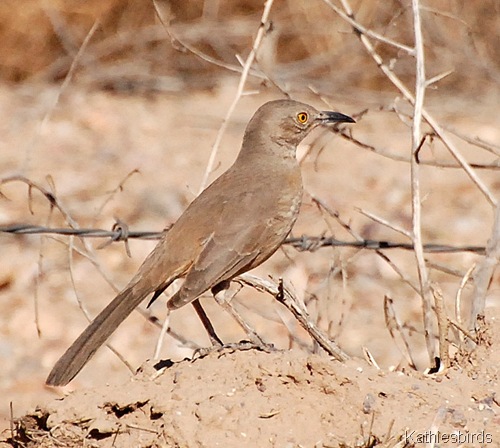 It was along these dry, barren roads that we found Bendire’s Thrasher, a Life Bird* for both Chris and I! While it looks superficially like a Curve-billed thrasher, it lives in a totally different habitat, and has a different song and a different beak! Notice how much straighter the bill is, with the pale area at the base of the beak. I thought I would never see this species of bird because I thought I would never be able to tell the difference from a Curve-billed thrasher, but Rich told me once I saw one I would never get them confused again and I can honestly say now that I can see the difference, as long as I can get a good look at that bill! When Rich played the song on his phone to draw them out, the song sounded similar to a House Finch’s song to me, only bigger and more complicated. The funny thing was that though the Curve-billed Thrasher and the Bendire’s Thrasher are supposedly NEVER seen in the same habitat, we found a Curve-billed thrasher right across the road from where we spotted the Bendire’s!  Later on in the afternoon we found yet another pair of Bendire’s Thrashers in the middle of the road as we were driving along! 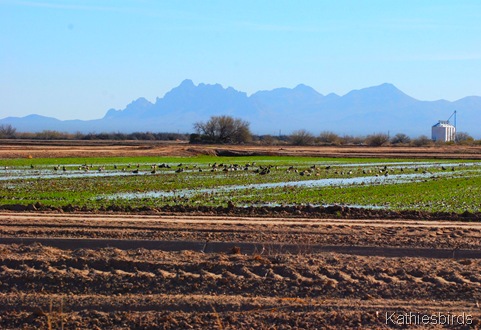 We hunted all over for Mountain Plovers, but all we found was a field of ducks! 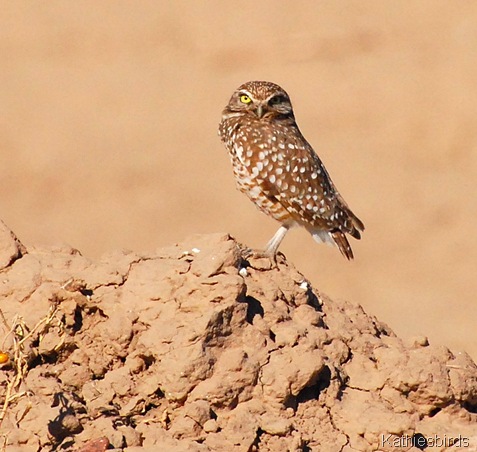 On the same dirt road as the ducks we spotted a Burrowing Owl! 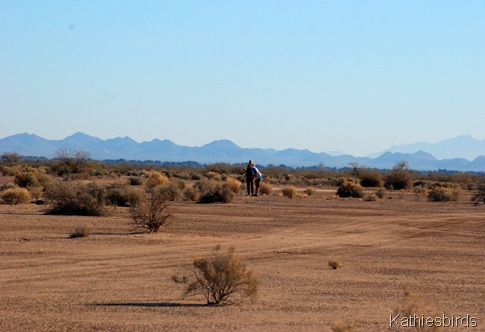 Rich directed us to some sage bush flats where we finally found a Sage Sparrow, my first for Arizona and the only other one I have ever seen. I found my first and only Sage Sparrow on Antelope Island years ago when I lived in Utah! 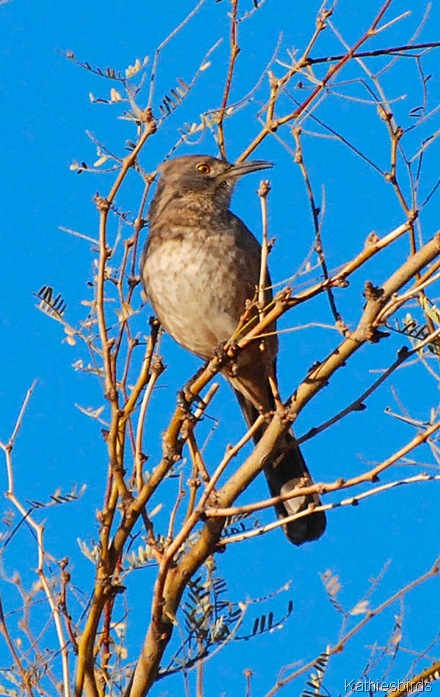 We ended the day in a little dirt town called Arizona city where there is a manmade lake surrounded by stucco houses. In a few areas one can still get near the lake to count birds and it is an eBird Hotspot. Here we found a black-necked stilt and many more ducks and coots. there were dozens of doves and sparrows as well but I was so tired by now that I stopped taking pictures until we heard an unusual song. Rich said it was a Bendire’s Thrasher while I thought it was yet another House Finch until this plain looking bird emerged from the mesquite tree and we could see and hear it as it sang! What a way to end our Big Day of Big January Birding! In the end we counted 68 species of birds in Pinal County and we added 3 Life Birds counting the Pacific Loon we had seen earlier in the day! Now we had at least a 50 mile drive back home! Oh, and we never did spot any Mountain Plovers! It looks like Chris and I will just have to take a drive back out here again soon! 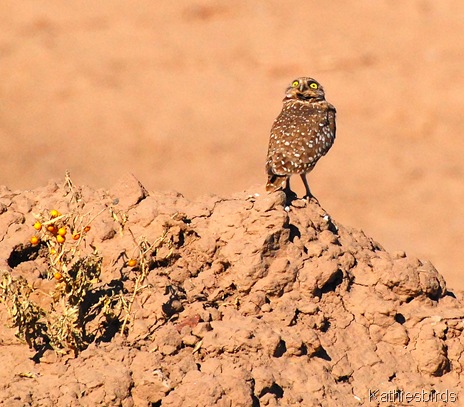 Birds seen in the Santa Cruz Flats-40 miles in 4 hours:

Please read my poem, How Love Should Be