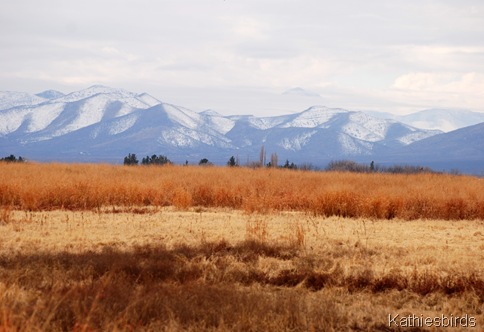 Snow on the Mountains at Whitewater Draw 1-3-13

It was relatively early on January third when Chris Rohrer, my son Chris, and his wife, Melissa headed to Whitewater Draw for some sight seeing and some birding. I so wanted Chris and Melissa to see all the thousands of Sandhill Cranes. We went in two cars since I knew that Chris and Melissa would not want to spend the whole day watching birds with us two obsessive birders. So, Chris rode with Chris, and Melissa and I rode together. 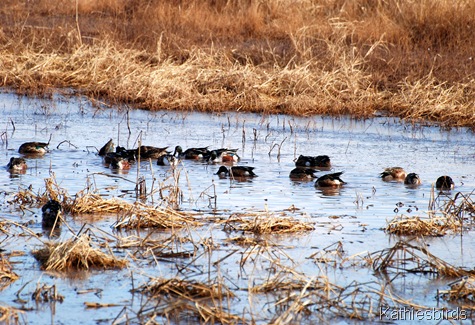 It was already a chilly morning in Tucson and I knew it would be even colder in Whitewater Draw since a cold front had moved through and Bisbee had seen 9” of snow the day before. The forecast was for a winter storm to be passing off to the east in New Mexico and though it seems ironic that a place further south and closer to Mexico can be colder, it is true. I wore several layers and brought several clothing options with me. As we headed south from Benson I watched the car thermometer as it dropped from the 40’s down into the 20’s! I was so glad I had my gloves and a thermos of hot tea! 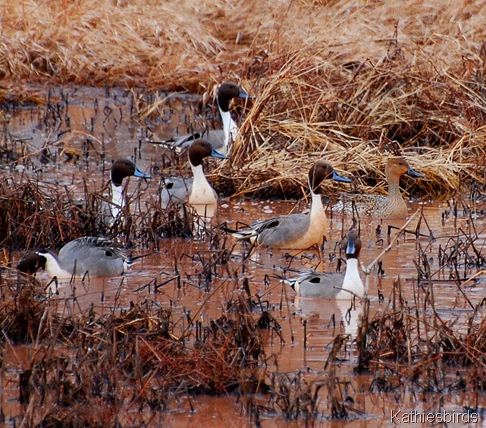 Chris and Chris arrived about 15 minutes before Melissa and I. We quickly parked and joined them over at the marsh which was full of ducks but no cranes. Chris and Melissa waited patiently as we walked around the pond. A few cranes flew overhead, but not the great numbers I wanted them to see! I could tell they had already had enough of birds and were eager to be off on their own, so we all walked back to the cars where I gave them my car keys and we moved my stuff from my car to Chris R’s car. After a quick hug good-bye those lovebirds went off on their own and Chris and I walked back toward the marsh. 15 minutes after Chris and Melissa left, the cranes arrived! 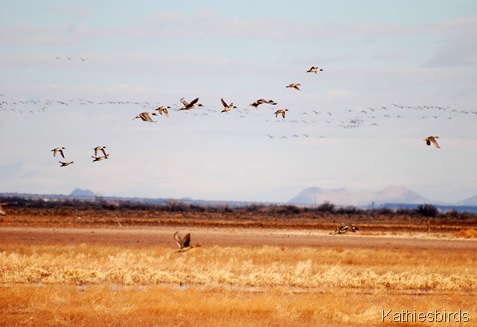 It started with a few birds as the pintails took wing… 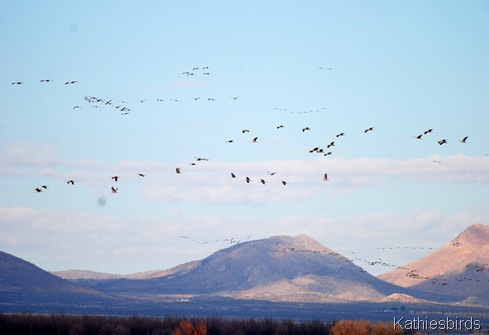 Then a few more came flying out of the north… 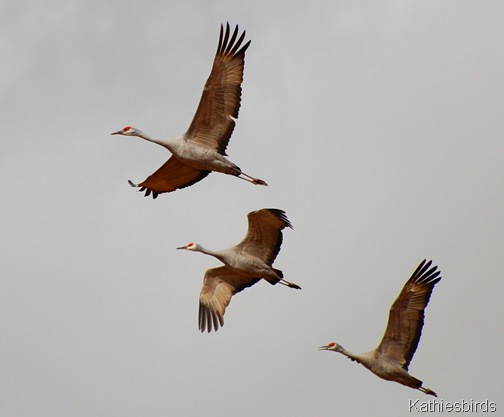 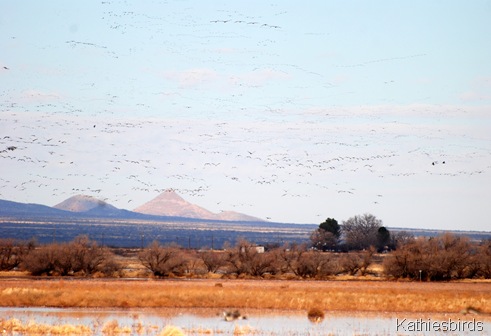 And then they came in waves of thousands, garroo-ing through the morning skies! 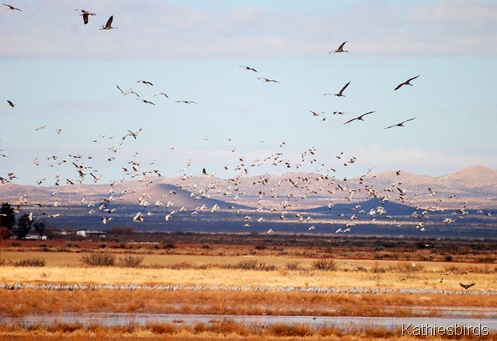 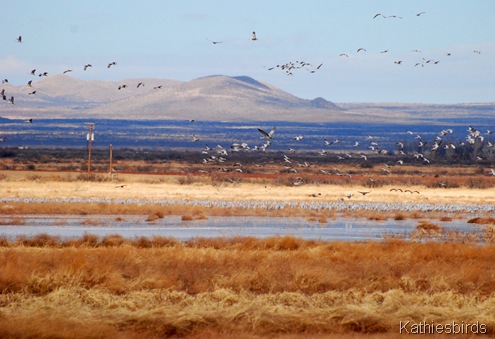 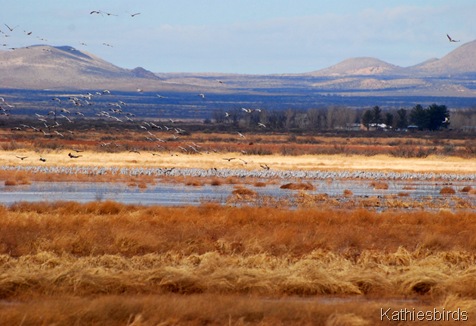 Chris and I stood in awe as we watched them land and fill the marsh! 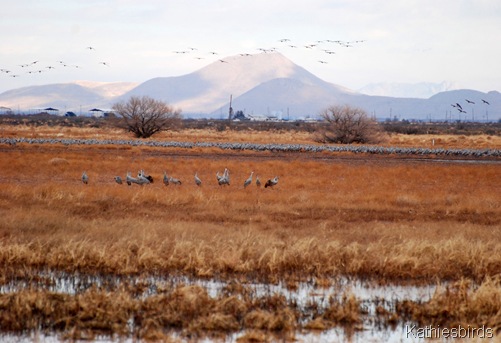 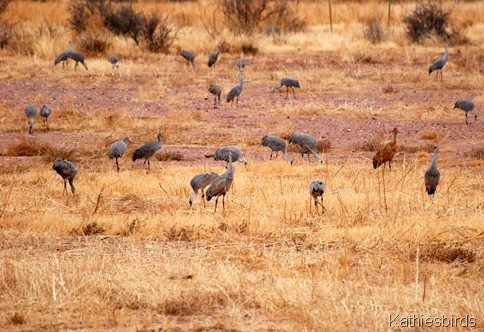 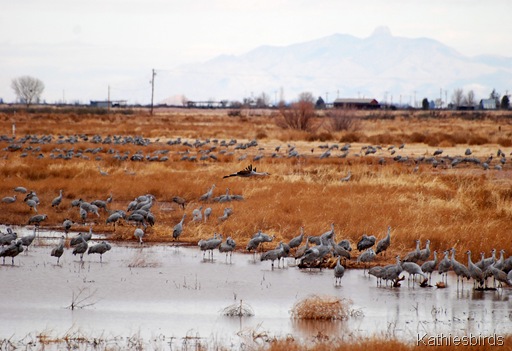 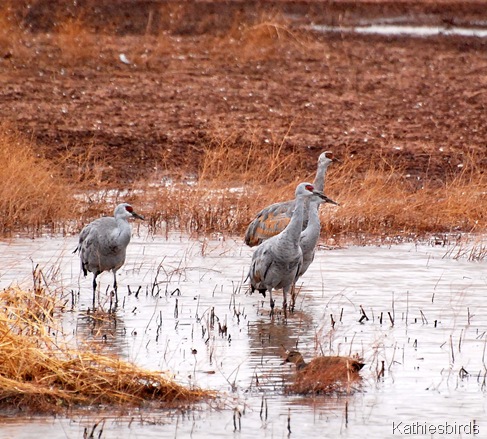 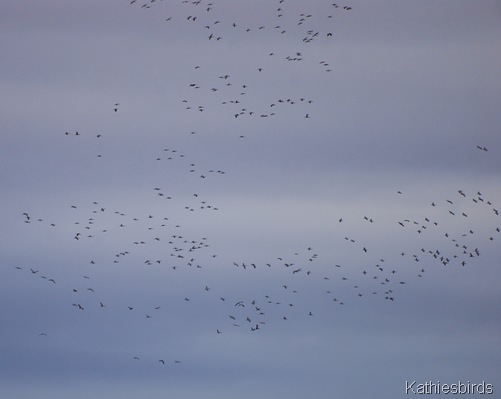 Sandhill cranes filled the sky as thick as fleas!

I was so sad that Chris and Melissa missed this sight. I was so thrilled to witness it once again for myself! Then, as the wind picked up and the clouds thickened Chris and I wandered the rest of the area searching for birds. We found a barn owl in the willows and sparrows by the hundreds in the grasses and brush. Of course we saw Northern Harriers and a few blackbirds. In all we counted about 40 species of birds here. Then we bundled up and headed north through the Sulphur Spring Valley towards Willcox. 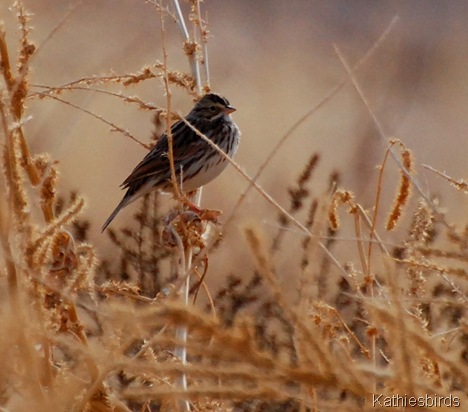 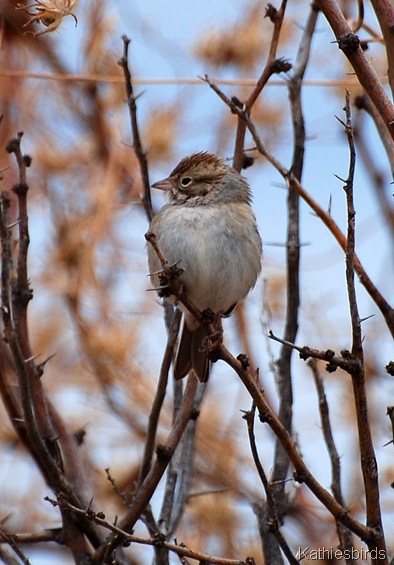 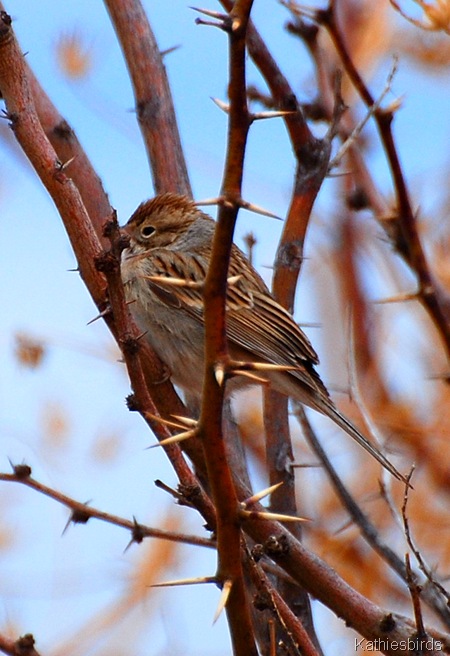 (Note: this information was changed on 2-6-13. This is possibly a clay-colored sparrow or a first year Chipping Sparrow) 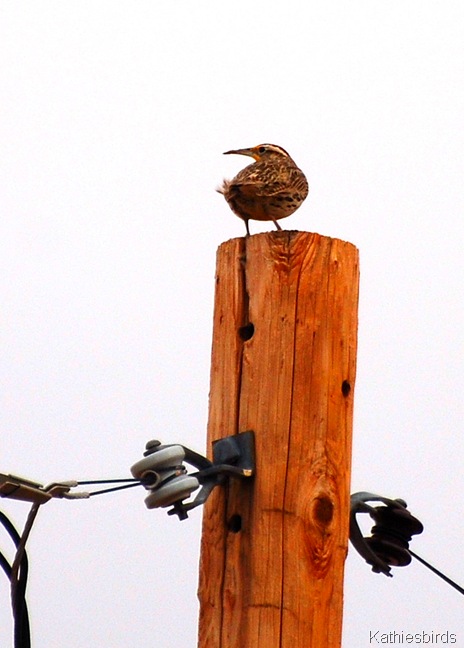 Big announcement: Chris Rohrer is the newest contributor to the Birding is Fun blog and his first post was today! Pop over to read it if you have time!

Congrats Chris and welcome to the team!

P.S. On a personal note: Gus had his other cataract removed today and all went well. Hopefully his vision will continue to improve as his eyes heal. We are very grateful for everything! I just want to say Thank You to those of you who have expressed support and concern!