Oh, The Places I Bird! 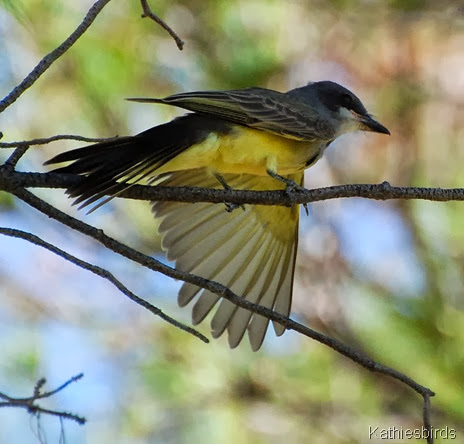 Birding can take you to some of the strangest places. Last month I went birding with Chris Rohrer as we went searching for some of the rare birds being seen in Arizona. Our main target was the Blue-footed Booby being seen at Patagonia Lake State Park, but along the way we made several other stops where seasonal birds were being seen. 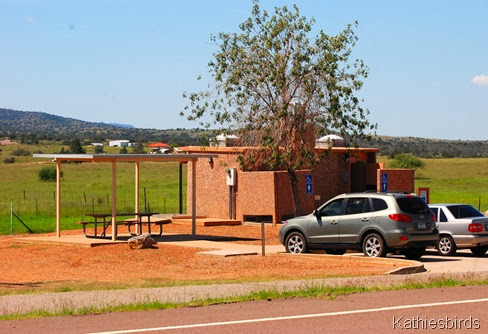 Our first stop was at the Sonoita Rest area on route 82 in Sonoita. It is an eBird Hotspot due to its easy accessibility and the birds that can be found in the grasslands surrounding it. (Plus, it is the ONLY public restroom you will find out here!) 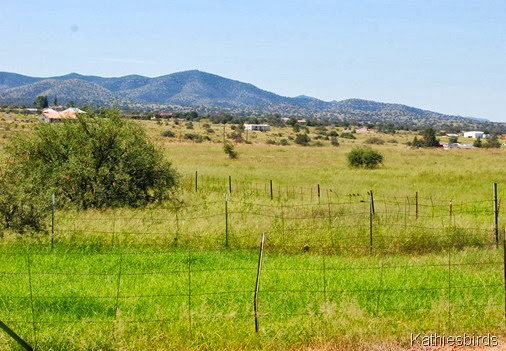 Behind the restrooms we found Barn Swallows and Lark Sparrows. 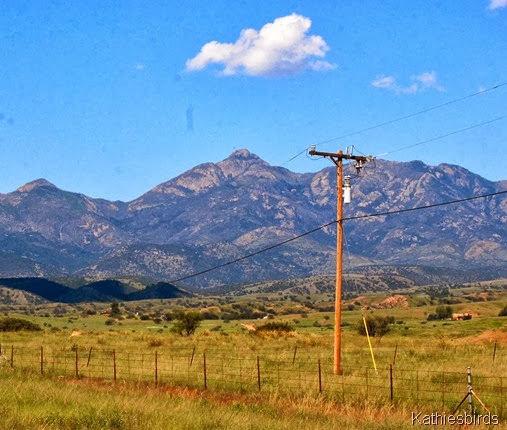 Across the street to the west we found Western Kingbirds on the wires. 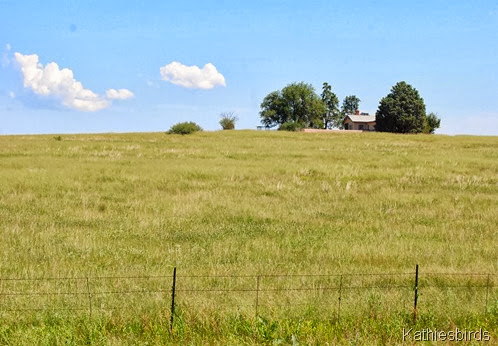 Across the street in the grasslands we saw and heard Grasshopper Sparrows, a Target Bird for this location. 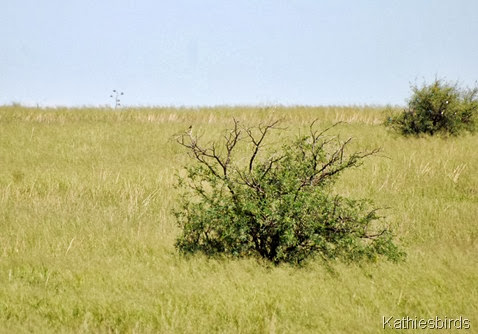 Yes, there is a sparrow on that twig! 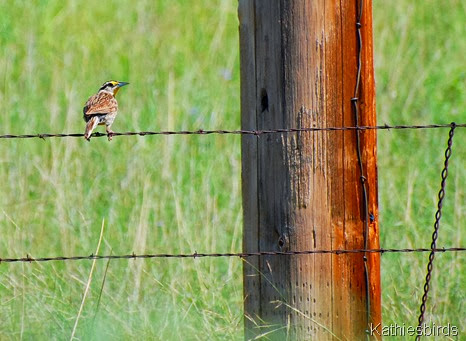 Closer to the road we found an Eastern Meadowlark! 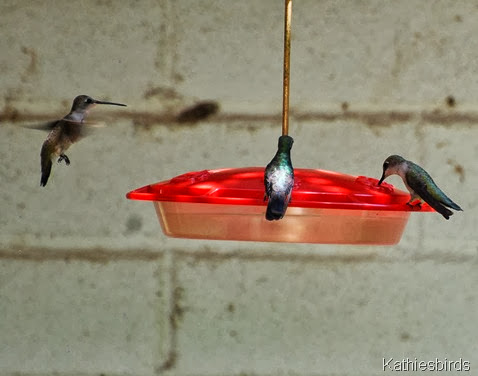 We stopped at Paton’s in Patagonia to count the hummingbirds… 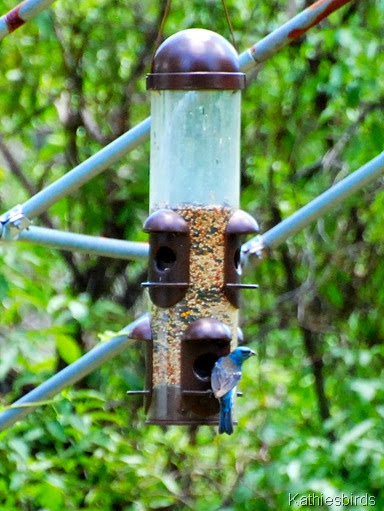 …but my Target Bird at this location was this Lazuli Bunting!

It was my first time seeing this species since moving back to Tucson a year ago. 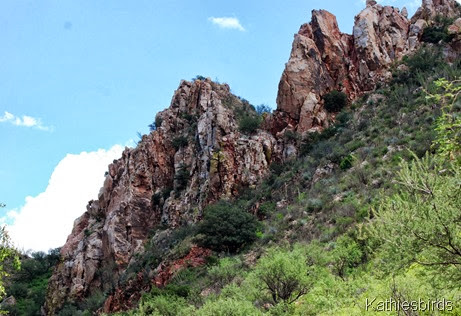 Our next stop and another eBird Hotspot was the Patagonia Rest Area. Thick-billed Kingbirds were reported to be here. But birding in Arizona can often turn up a different kind of bird… 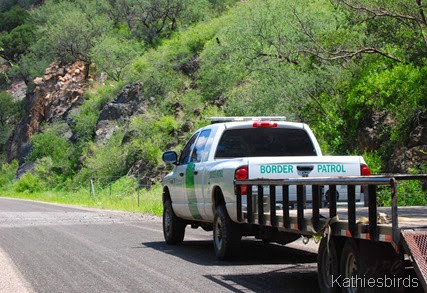 The Border Patrol was out in force on this day. I often see them when birding in Arizona, especially if I am in a remote area near the border. 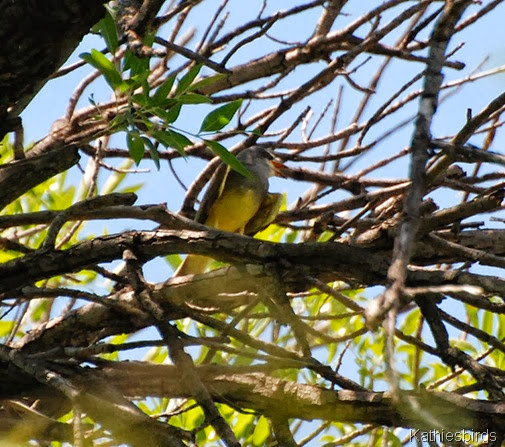 While we were here some other birders arrived looking for the Thick-billed Kingbird. Everyone got excited when some kingbirds were spotted high in the trees. Everyone rushed over and took pictures. The three other birders that were there ticked the Thick-billed Kingbird off their lists and moved on, but Chris and I did not, because this is one of the three birds we saw and it is not a thick-billed kingbird. Initially I thought it was a Western Kingbird, because in the moment and in that light it looked like it had the white side feathers on the tail. But, after seeing my photos I have come to the conclusion this is a juvenile Cassin's Kingbird due to the white chin and dark breast with a bright yellow belly. A Thick-billed kingbird has a white throat and breast and a pale yellow wash on its under belly, but not up its breast. And, of course, it has a very thick bill! 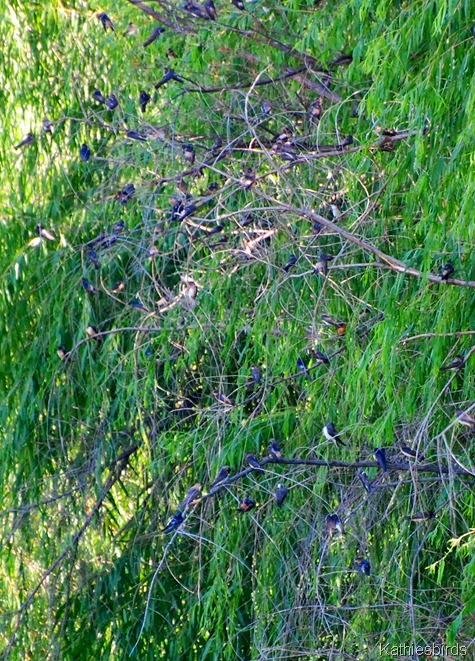 After a stop at Patagonia Lake State Park to see and photograph the Blue-footed Booby Chris and I continued on to Kino Springs. Kino Springs is a Golf course community in southern Arizona very close to the Mexican Border. The owners kindly let birders onto the property to count birds. It is also an eBird Hotspot. Chris had never been here and I had only been here once before so it was exciting to go back again. The day had grown quite hot, but there was a cool breeze blowing here and we were seeing so many birds that soon I forgot how hot I was! The sky and the trees were full of swallows! 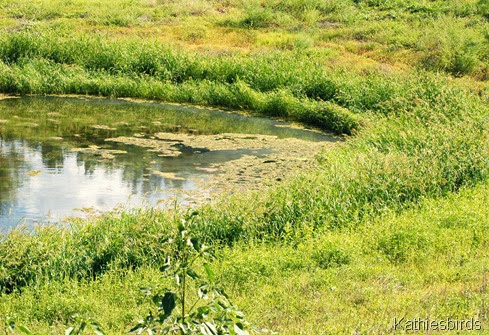 Down around one of the ponds we found so many sparrows and buntings! 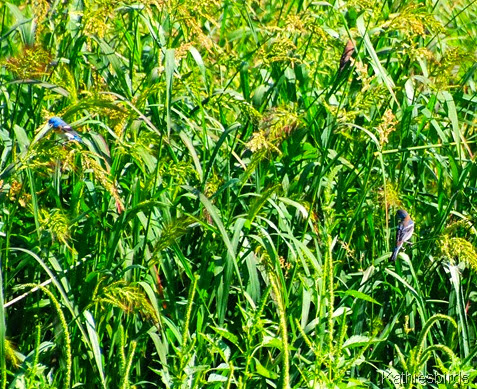 The grasses were full of Lazuli Buntings! 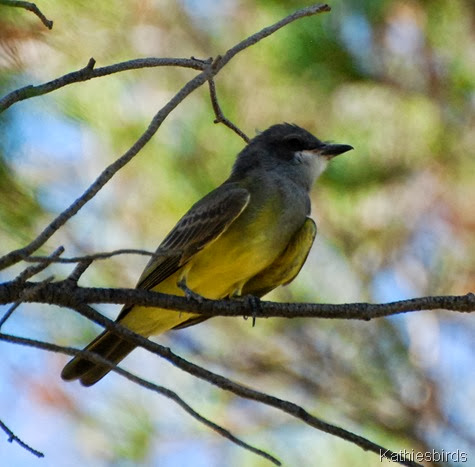 Kingbirds were being seen everywhere and I have to confess that at first I thought this was a Tropical Kingbird due to the notched tail, but after further investigation it turns out to be a Cassin's Kingbird once again. Notice the white chin and dark gray head and breast. Tropical kingbirds have a paler head and a paler yellow breast that comes all the way up to meet the throat. Wanting a bird to be a certain species doesn’t make it so. I have had to go in and correct my eBird list, but that’s okay, because accuracy is more important than getting a species on your list. 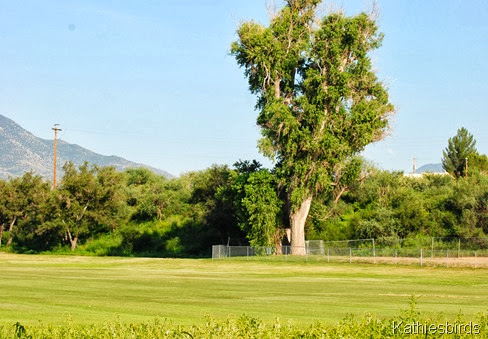 Besides the driving greens there were also sewage treatment ponds with birds in them. 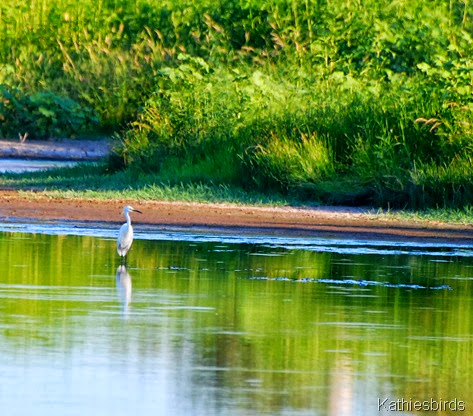 Our final stop was at the Rio Rico Pond in Rio Rico, AZ. This is a small farm pond alongside the road that is well known for having all kinds of rare birds show up here. One only has to park alongside Rio Rico Drive and just walk down the embankment to the fence to look for birds. There wasn’t much here today, but this Snowy Egret was a nice find. When I think back to this day it’s kind of funny to think that I went birding at two rest areas, a golf course, a sewage treatment pond and a farm pond as well as a state park. Yes, birding takes me to all kinds of strange and wonderful places, but best of all, I get to see all kinds of birds!

Places I birded on August 17, 2013 with number of species seen at each location:

(This does not include all the bird counts we did while driving between locations!)

Yes, it was a full day of birding and I was exhausted by the time we got home, but we had so much fun and saw so many birds, including two Life Birds for me: the Grasshopper Sparrow seen at the Sonoita Rest Area, and the Blue-footed Booby seen at Patagonia Lake State Park! 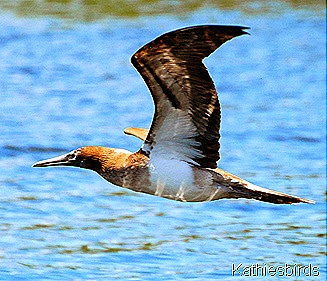