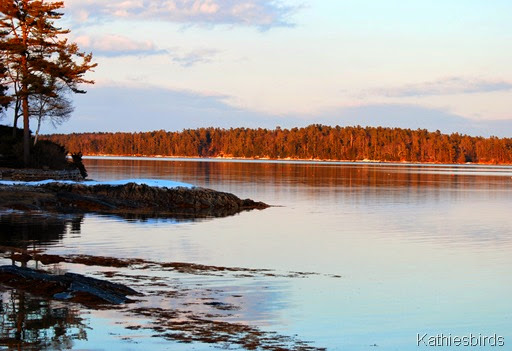 Now that I am settling in I am trying to make regular visits to the Mere Point Boat Launch. After returning from Florida last week I went over one evening to count birds and see what I could see. The bay was calm and smooth as glass, reflecting the colors of the blushing sky. Many times I see birds far across the bay, but they are too far for me to identify most of the time. The view above is looking Northeast, while the one below is looking south from the Boat Launch. 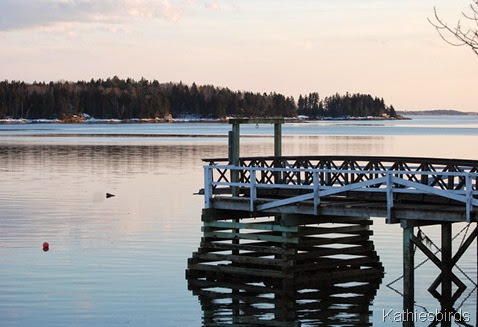 The Mere Point Boat Launch is a public access site but most of the land surrounding it is private property, as is this dock. So far I have seen Blue Jays and Mourning Doves here. Crows are often flying and calling. In the bay I have safely identified Buffleheads, Common Goldeneyes, and Common Loons, but tonight I was in for a surprise when this Surf Scoter showed up! The photo is not the best because the bird was so far out, but you can still see the bright colors of its beak and the white on its forehead and the nape of its neck. I watched the Scoter for awhile but suddenly it took flight when this creature popped its head up! 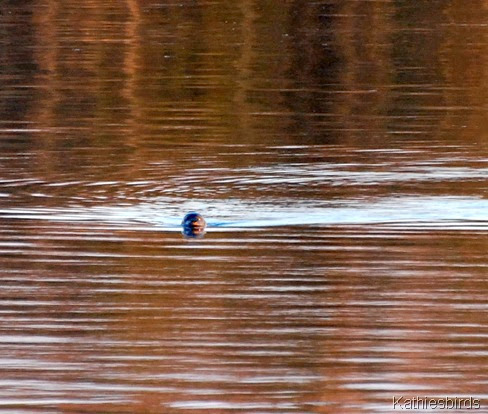 I stood on the dock amazed to think that I could have seals as regular mammal sightings! In doing some research I discovered there are five different seal species that can be seen off the coast of Maine in Winter. I am not sure which species this is as all I can see is the top of its head! The next weekend, when we should have been home unpacking boxes, Gus and I  went out for a drive to explore out surroundings. We drove to Bath, Main first where we stopped at the Bath Boat Launch and photographed all those gulls. But then I spotted some other birds in the Kennebec River. They were the first Canada Geese I have seen since moving back to Maine! 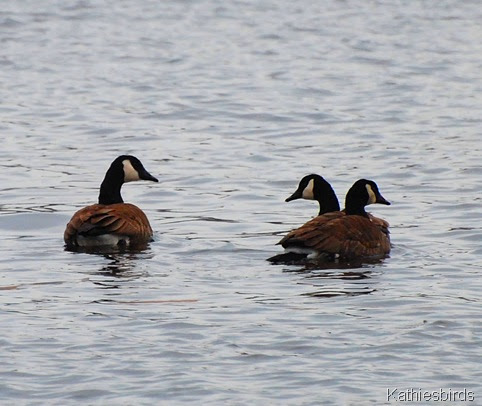 We crossed the river to Wiscasset next and found a place where someone was feeding gulls and ducks on a small point of land. A large flock of mallards paddled in this cove… 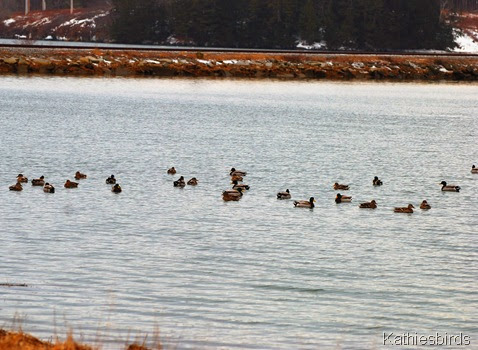 While across the cove the American Black Ducks hugged the opposite shore. I guess they don’t like to hang out with mallards! Look in the photo below. Can you see the small dark lumps along the water’s edge? 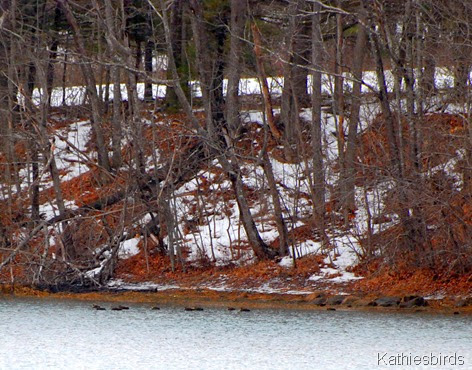 American Black Ducks in a cove in Wiscasset, Maine 3-16-14

If you can’t tell from the pictures, it was a very gray morning on Saturday but it soon cleared up as the day went on and blue skies prevailed. By Sunday morning the sunlight was dazzling as we headed out for a drive once again! 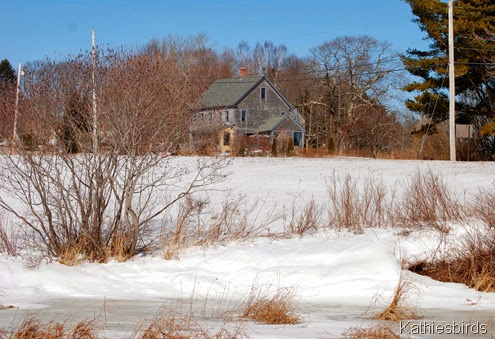 While I live on Mere Point and we have Mere Point Bay on the Northeast side of us, on the other side is Maquoit Bay. Maquoit Bay is actually the bay I can see from my great room window and Rossmore Road takes you to the top of the bay where there is another boat launch at Wharton Point. I was standing on that boat launch and looking back at this house. 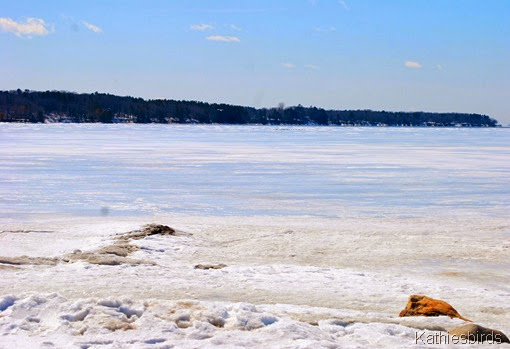 The bay itself is quite frozen at this end, but I could see a large flock of gulls perched on the ice shelf. One of the things I like about being back in Maine is seeing the New England Architecture, which is so different from the southwest. Gus and I were just gallivanting around, and following our own whims to see where they would lead us, but finally we set a course for Harpswell and Orr’s and Bailey Island. I had driven part way down Route 123 during the Great Backyard Bird Count but turned off at Cundy’s Harbor to count birds because it was closer. This time we would drive all the way to the end to see what we could see. Because I had looked at the map, I kind of knew what was ahead, but it was fun to watch Gus’ reaction as we got closer to the end and the sea appeared on both sides of us! He loves the sea and would love to live as close to it as possible! 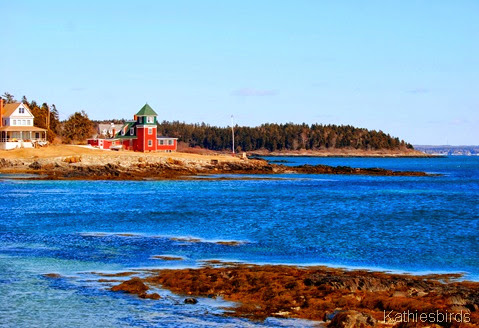 We crossed a unique stone bridge and parked on the Bailey Island side where I jumped out to count loons and ducks in the channels and coves while Gus walked the quarter of a mile back across the bridge. It was brutality cold last Sunday with gale force winds and I was zipped up tight in my parka while trying to count birds. It was difficult to hold my camera steady or even stand upright in such wind, so my birds shots are not very good. I am also having to learn how to shoot in the bright glaring light of the sea, all new things for me! But, when we got to the end of the road, this memorial to Maine fishermen was much more cooperative! 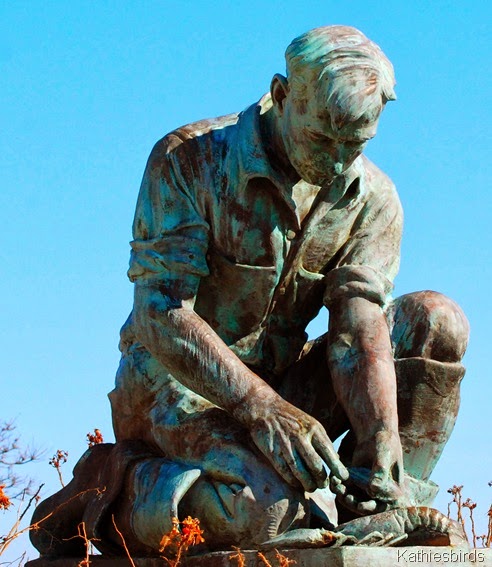 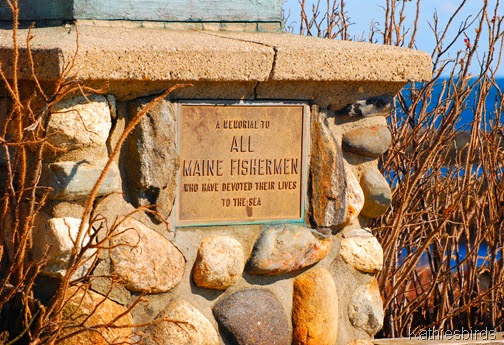 I cannot wait for the weather to warm up and to get out and do more exploring!

(Note: All birds listed below a date change were seen on that same day.)