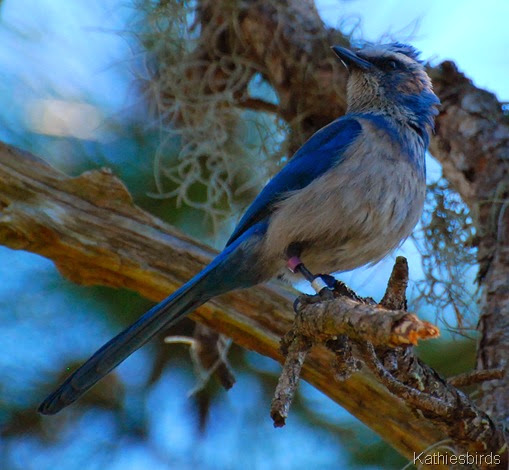 Within two weeks of moving from Tucson to Maine I was in Florida with my mother visiting my brother. Though I had been to Florida twice before, it was all before I became an eBirder, so I was looking forward to getting there and actually documenting the birds I saw this time. Though I left my birding buddy, Chris Rohrer behind in Tucson, we still communicated via Facebook and text messages and frequent talks on the phone. When Chris heard I was going to Florida he impressed on me the importance of finding the Florida Scrub Jay, since it is a threatened species. After 18 months of birding with me, Chris knows that I am more of a relaxed birder, while he has learned to chase the specialty birds down and let the other more common species fall into place. With that in mind, I set out to find the Florida Scrub Jay. 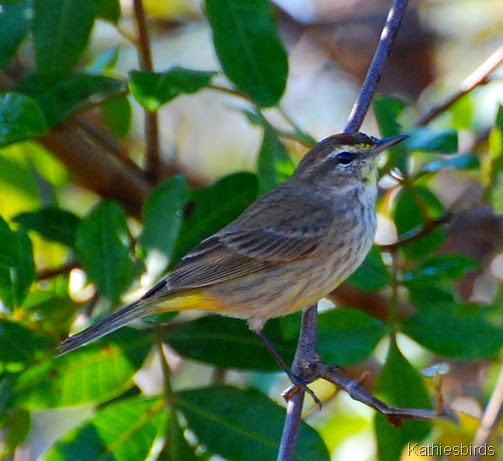 It turns out that one of the locations the Florida Scrub Jay is found was only 3.2 miles from my brother’s house. Within two days of being there, he let me borrow his car and drive over to find the scrub jay. I followed my GPS to the exact location and started searching. The spot is an open and undeveloped field with deteriorating roads that were laid out but no homes were every built. I drove the perimeter, then parked and walked. I scanned trees and scrub. I saw Eastern Meadowlarks everywhere. I found Loggerhead Shrikes, Burrowing owls, Yellow-rumped warblers and Palm Warblers. 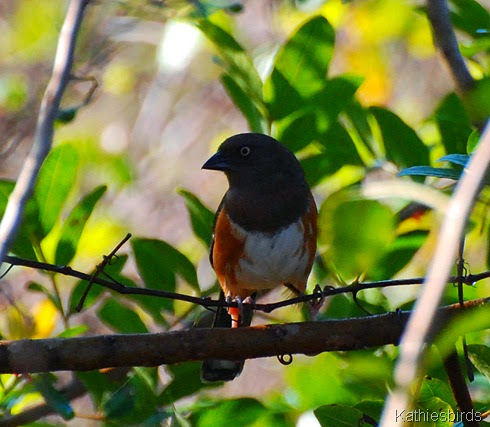 Though I went back time after time and spent an hour or more there each time, I never found a scrub jay. For the most part I was dependent on the use of my brother’s car which I found very frustrating as he was trying to sell his house and we would all have to pile in it and take off whenever there was a showing. I finally smartened up and found out I could rent a car relatively inexpensively, so I rented one for two days. On the morning of March 4th I drove to the Scrub jay spot one last time as I tried to decide where I wanted to bird today. I parked the car and walked the perimeter of a scrubby area once again. I found an Eastern Towhee, but no scrub jays. All the while I could hear Chris Rohrer’s voice in my head, “If you don’t see this bird now, you may never get to see it! It might go extinct, ‘cause people are stupid and they keep destroying the habitat!” What was I to do? 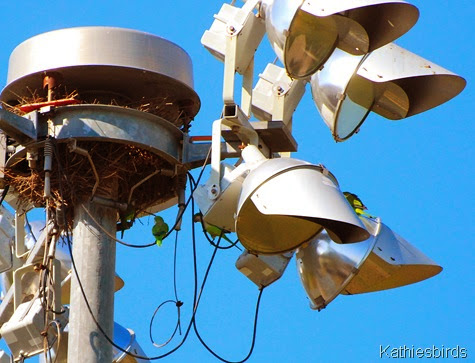 While I tried to make up my mind, I drove to another location in Cape Coral to find some resident Monk Parakeets (blogpost with more pics to follow). While there I received a message from Mia McPherson of On the Wing Photography about Oscar Scherer State Park, a well known location for finding the jay. I had debated about driving back out to Ding Darling or over to Corkscrew Swamp, but with Mia’s urging I decided to jump in the car and “find that jay!” I now had Mia’s voice in my head as well. Oscar Scherer State Park was about an hour and half north of Cape Coral, so I jumped in the car and headed north. Once at the park I was told the best place to find the scrub jay was on the Green Tail. I quickly parked the car, loaded myself up with water and birding gear and headed down the trail which is hidden behind the visitor’s center near Osprey Lake. 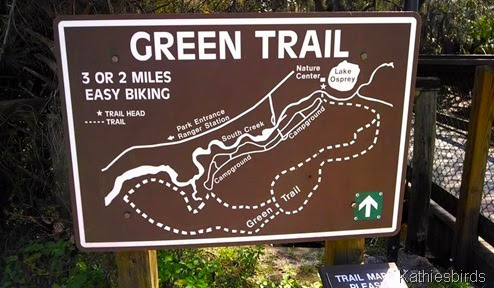 By now it was afternoon. The warm sun blazed down on me, but with a slight breeze it was comfortable. 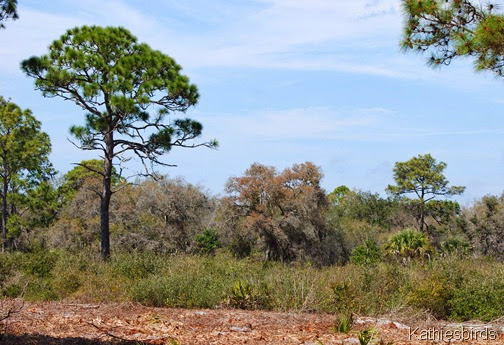 The trail led out through Florida scrub growing out of a soft silvery sand, perfect scrub jay habitat. I saw a few Northern Cardinals and a Mockingbird. I found Gray Catbirds and yellow-rumped warblers. 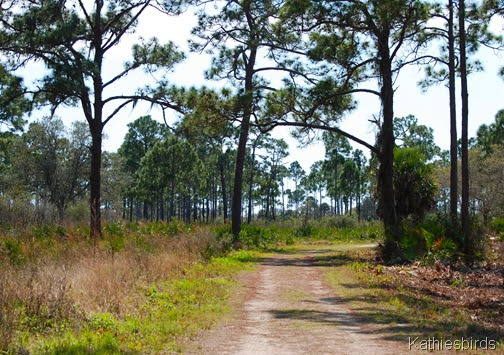 I walked and watched and listened for birds. 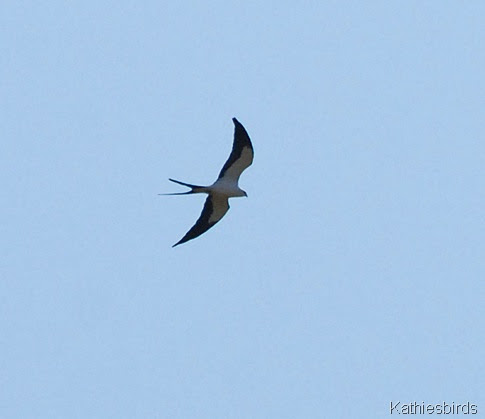 I was amazed when a Swallow-tailed Kite sailed over the trees!

It was a *Life Bird for me! Already I felt like this trip was worth it, but would I ever find those jays? I had seen no sign of them yet. 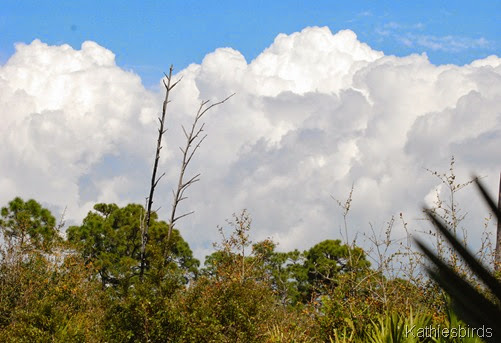 Puffy clouds built on the horizon. 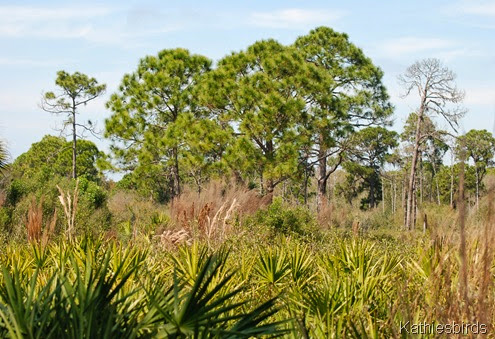 I continued around the field searching everywhere for motion. 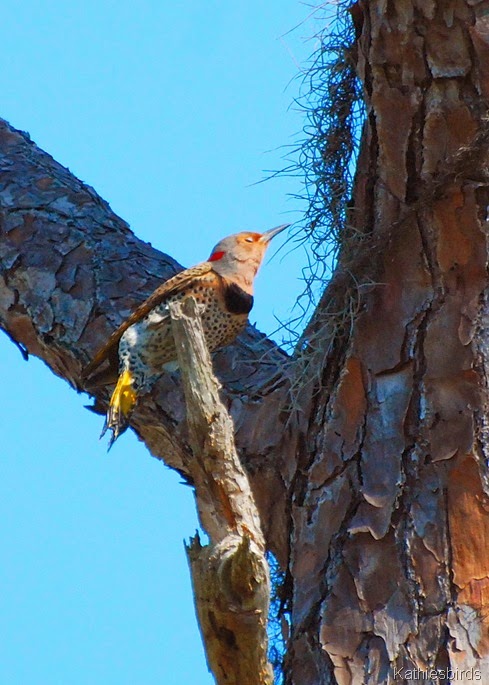 I followed the flight of a bird into a nearby tree, but it turned out to be a Northern Flicker, one of my favorite species, and though I was happy to see it, it still was not my desired scrub jay. The blazing sun was cooking my exposed skin. I found some shade and took a sip of my water. I was more than halfway around the trail now and losing hope. I tried to console myself with the fact that at least I saw the kite. Then, I started plodding along in the soft, silver sand back toward the visitor’s center and the parking lot when suddenly…What was that?

So many of these trees were dripping with Spanish moss and flaking bark. It was so easy to think you saw a bird where there was none, but take a closer look at the photo below. 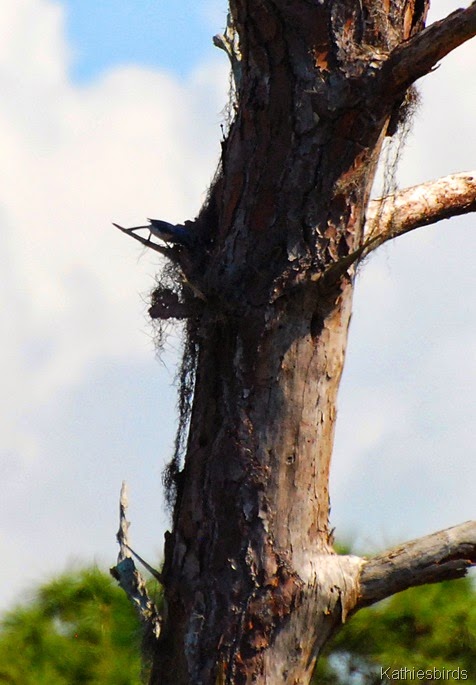 Do you see the bird on a branch? 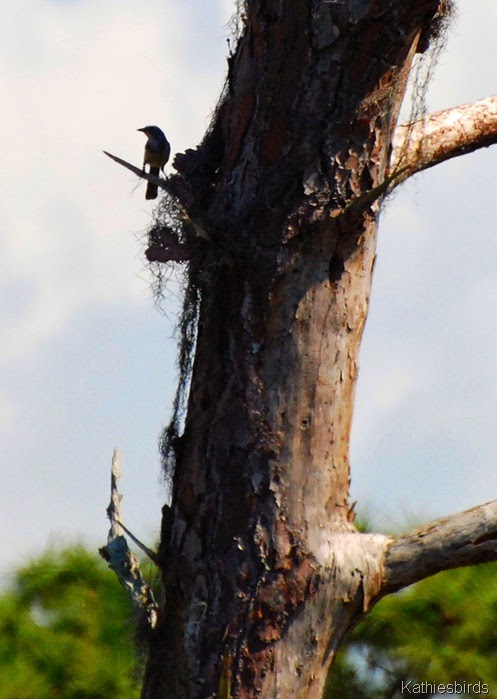 My breath caught in my throat as I realized that I was seeing the distinct silhouette of a scrub jay! I started snapping away, hoping to get at least some kind of proof that I actually saw the bird. The bird was extremely backlit, which made photography difficult, so I slowly tried to maneuver into a better lighting situation. 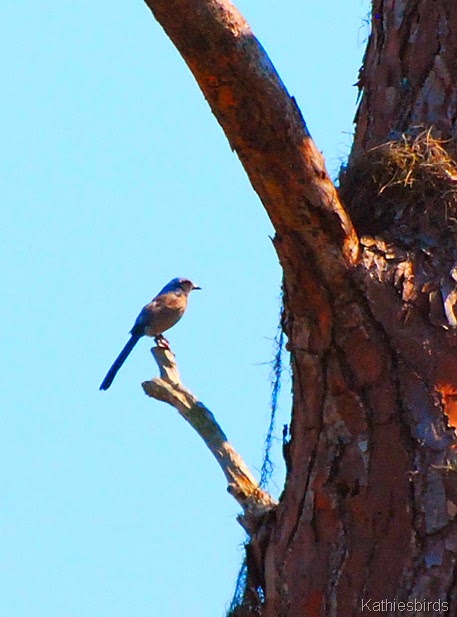 I finally got to a spot where I could at least see some color, but it was bright and dazzling daylight and the bird was still so far away in the middle of the scrubby field. Would this be my best look at it? Suddenly the bird flew directly toward me and landed on a branch right over my head, about 12 feet away! I could not believe it as I tried to contain my excitement and snap pictures. 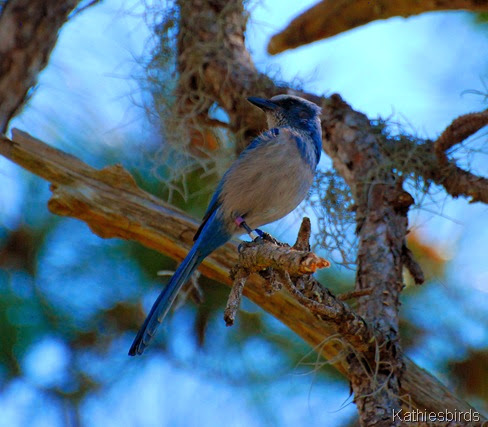 I switched back and forth between camera and bins, not wanting to miss a shot, yet wanting to just observe this bird in its natural habitat. I had come so far and worked so hard for this bird. When the jay landed on the tree in front of me, I also heard a sound behind me. I did not dare turn around for fear of missing the jay in front, but after a few minutes I slowly turned my head and looked over my shoulder. OH my goodness! There on the ground behind me and only a foot away was another scrub jay! I slowly slid my hand into my pocket and removed my cell phone. After turning it on, I was able to open my camera app and snap a few pictures of the jay with my cell phone! 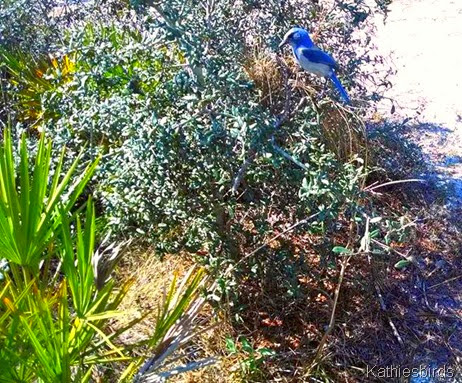 As I stood there slack-jawed in awe the birds suddenly flew off to explore a different location. It was then that I became overwhelmed and burst into tears. At first it was from the relief and joy of seeing this marvelous and endangered bird species. Then I realized that I was also crying because Chris Rohrer was not with me. Over the past 18 months we had shared so many birding adventures and had been together on so many Life Bird sightings. When I left Tucson everything was so hectic and crazy, I did not cry when I said good-bye, but this is how I am, and I knew it would sneak up on me at some later date when all the stress was over. Now it hit me like a ton of bricks and I walked back down the trail sobbing. Thankfully there was no one out there but the birds to hear me, so I just let the tears come. I find it is best to just let your emotions out, rather than hold them in, especially if you are by yourself and there is no one to see it! I quickly posted my finding to my Facebook page so Mia and others would know I had been successful. Then I walked back with both joy and sorrow in my heart. 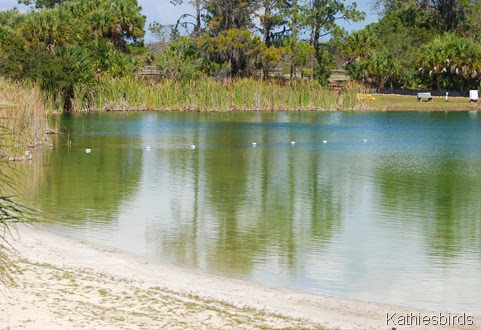 Back at the visitor’s center I walked by osprey lake. I hoped to see some kind of ducks or shore birds, but no luck, and though this looks like an inviting swimming hole… 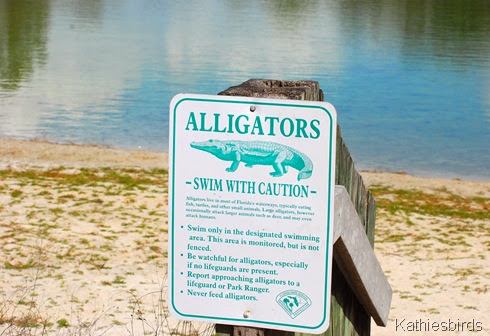 …you will not find me swimming here anytime soon!

In celebration of spotting the Florida Scrub Jay, I did buy myself a Florida Scrub Jay Sweatshirt from the Visitor’s Center as well as a cup of Butter Pecan ice cream which I took and ate while sitting at a picnic table where I watched for more birds! Before long I had to go, since I needed to pick my mother up from a friend's house in Fort Myers. The sun had baked me skin while on the trail, so the air-conditioning and shade of the car felt so good. While I was still in Florida I learned that Chris had bought tickets to visit a friend of his in Cape Coral who had wanted him to visit for the longest time. He would be arriving about 2 weeks after I left. I was so excited for him and started giving him tips about where to bird. While I would be there a total of two weeks, he would only be there for one. But, he would have a car available to him for the entire time. Would he beat my record? On March 20th, the day after his arrival, Chris drove to the same Scrub Jay spot that I had visited in Cape Coral so many times. He soon texted me this photo below… 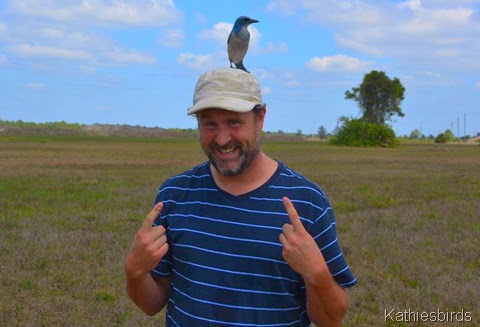 See that vast open area behind him? I was there three different times at three different times of day without success! How did he get so lucky? This picture cracks me up! All I can do is shake my head. Chris has far out grown me and has become an expert birder. He probably won’t tell you this, but he is now #10 on the eBird Top 100 in the Country! I am so proud of him! Thank you Mia for telling me about Oscar Scherer State Park, and thank you Chris for urging me to find this bird! You will always be my friend. 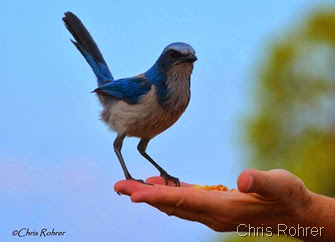 Yes, he got it to land on his hand as well!

Here is the list of species I saw at Oscar Scherer State Park in Florida:

*Life Birds –the first time I have ever seen these species. 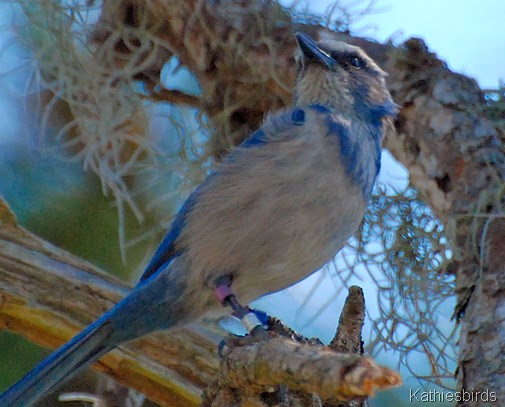