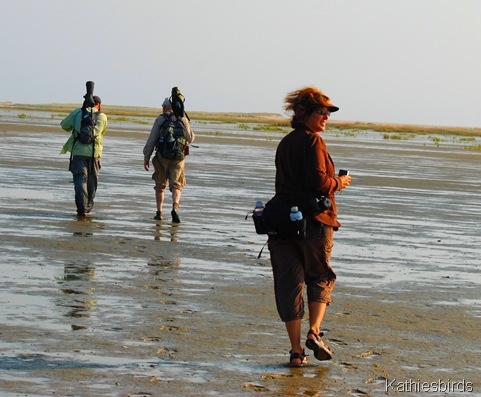 My journey to South Beach on Cape Cod’s barrier island began at five a.m. on September 9, 2011. I was suppose to get up at 4 a.m. but due to an unfortunate twist of fate I set my alarm clock to the wrong time. It put me an hour behind schedule and though I missed out on having coffee with Jeff and Dawn we drove down to the harbor anyway and were fortunate enough to get the ferry out to the island after all. Another birder named Matt Malin was headed out there also and as we rode across the waves with the wind whipping in our faces we struck up a conversation and became fast friends for the day. Matt tells us he has birded the island several times and often comes here to count birds. Apparently he is an eBirder also, so he and I have something in common. However, I am feeling very lost as far as identifying species out here on this island. Not only do I not know what to expect, I know I have little to no experience with most of the species and I also know that many of them are molting to their fall or winter plumages, which makes identification even more difficult. So, I am trusting Jeff and Dawn to guide me this time, and now, Matt Malin. 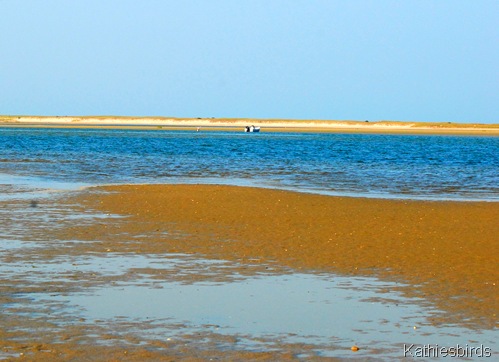 It soon becomes apparent that it is a very horizontal world out here. Everything is long and flat. There are no trees, a few small scrubby bushes, and lots of sand and waving grass. The small ferry gets us as close to shore as possible, then we jump into the water up to our knees and wade to shore. It is a sunny day which, though it started out cool is already warming under the bright, though late summer sun. The water feels cool and refreshing as I step out of the boat. I feel my heart pounding with excitement and anticipation. I am doing something I thought I would never get to do with friends whom I love in a place that seems so wild and exotic to me. And it is wild. There are no buildings of any sort on this island. The restroom facilities are open air behind a dune and hope a plane does not fly over! But I don’t care! I am here and I’m with friends on a grand adventure and it is wild and I will be outside all day long! It is about 8:45 a.m. when the ferry drops us off. It won’t be back to pick us up until 4 p.m. Until then, we are on our own! 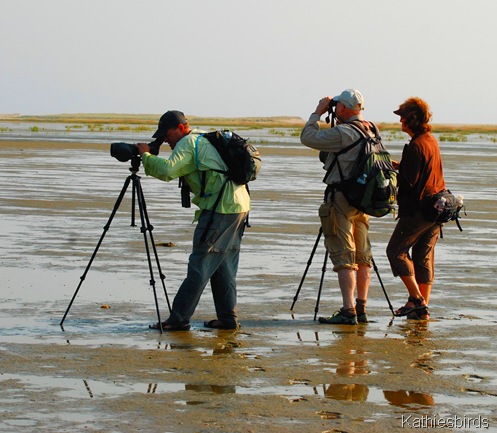 It isn’t long before we see birds. Jeff and Matt set up their scopes and soon we are scanning the shoreline. 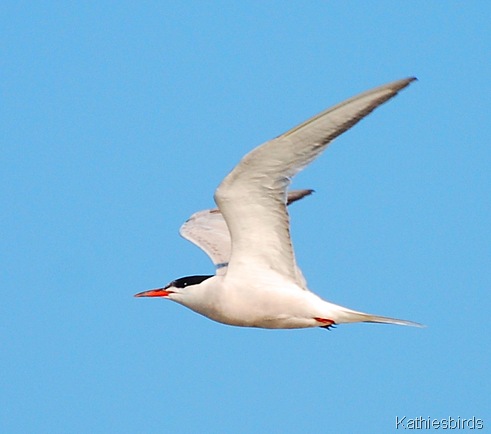 Common terns are some of the first birds we see… 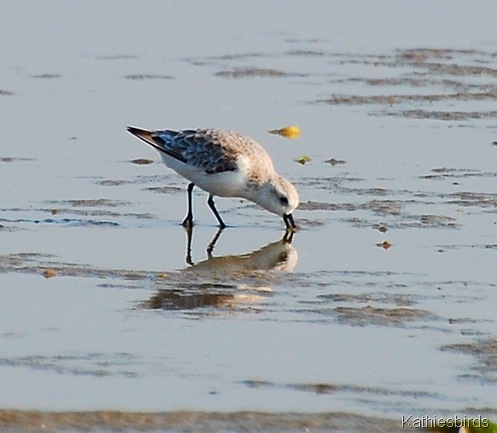 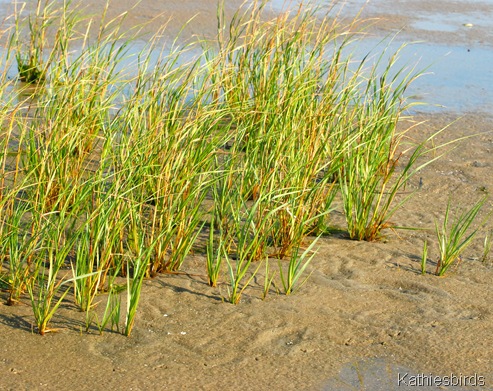 I love the softly waving grasses and the wet sand beneath my feet. 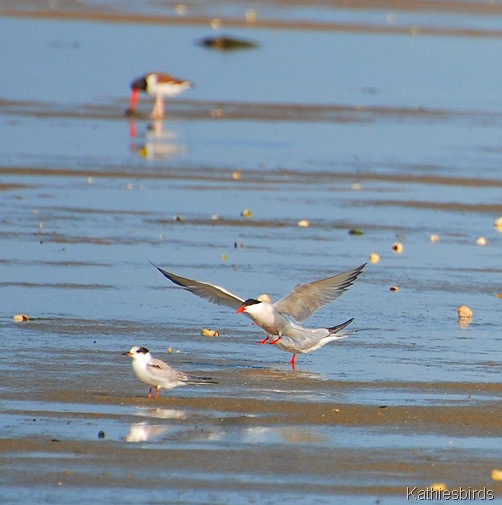 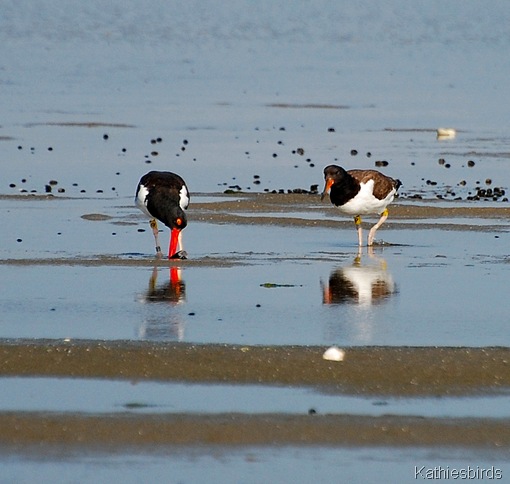 But I am drawn to these American Oystercatchers, which are a *Life Bird for me. 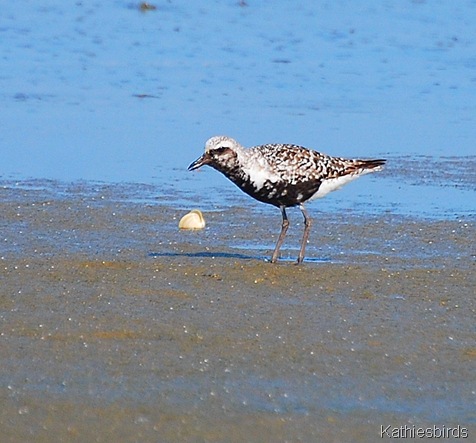 Soon I see another Lifer; a Black-bellied Plover! I thought I would never see this species of bird! We watch for awhile as a few other black-bellies pick along the shore line. I get very good looks through bins, scope and camera lens. The plovers are currently molting into winter plumage and so have an almost calico look to them. 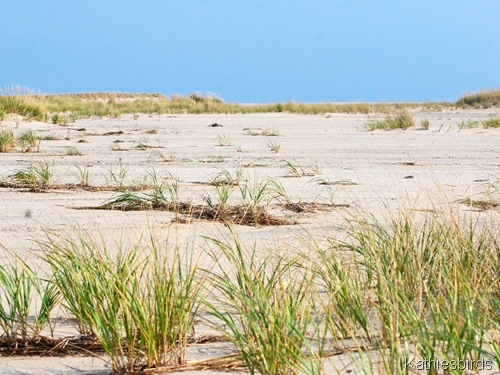 We hike across the dunes to the open Atlantic side of the island. 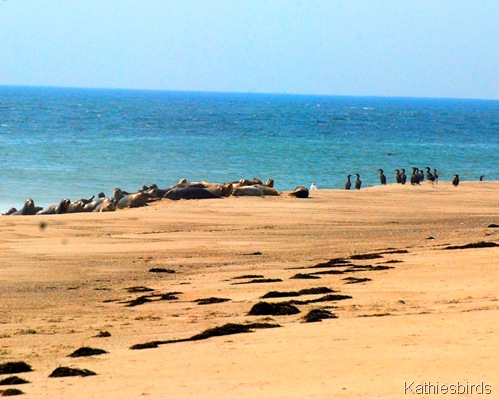 Here we are greeted by hundreds of seals! They lounge on the beach and bob in the waves watching us as curiously as we are watching them. I have tried and tried to find seals on Plum Island and at Salisbury Beach farther up the coast. I would have been trilled to see just a few, now we have a crowd of them and cormorants to boot! 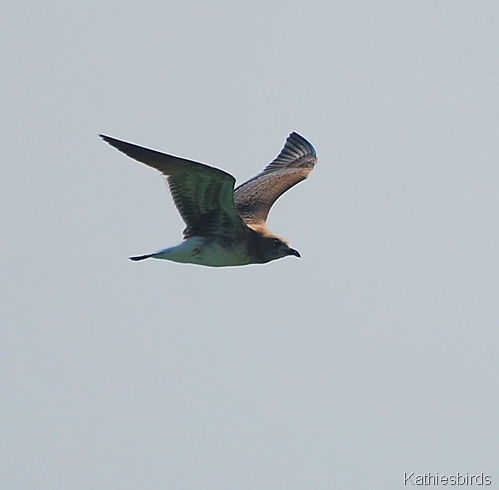 (Matt Malin politely pointed out that this is not a jaeger at all, but rather, an immature laughing gull!  So, I have corrected myself and added in the photo of the jaeger below with more jaeger photos to follow tomorrow after Matt has reviewed them. I did not have his email address until today. We saw the jaegers out over the open ocean and then one that flew over the beach. I compared my photos to photos and info in 4 bird guides but still could not figure it out! I still have so much to learn! Thanks for your help Matt!) 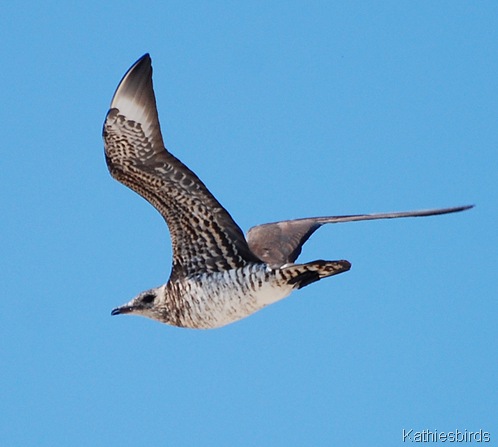 It is when we are on this side of the beach that we see our first of many Jaegers. A Jaeger is a seabird that steals its food from other birds, especially terns. It does not hunt for itself. On this side of the island we also see Wilson’s Storm Petrels bouncing off the waves and one Northern Gannet flying low along the horizon. I was so thankful for Matt’s help and the use of the scopes which allowed me to get a good look at these birds, all Life Birds for me. 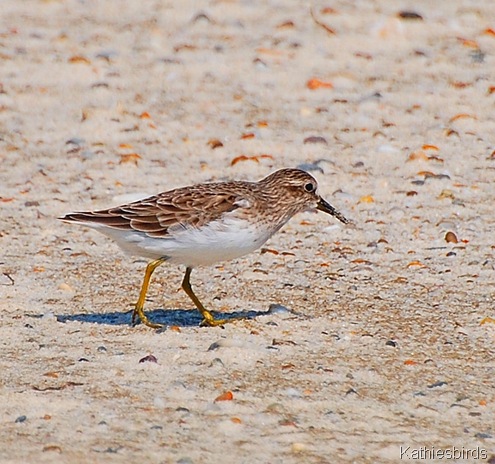 After walking back to the west side of the island we find many plovers and sandpipers in a little cove. We set up out scopes and watch birds at this location for quite awhile. While we are here a little savannah sparrow climbs in and out of the grasses and gave us a good look when it darted across an opening between the grass clumps. the lengthening shadows of the grass make us aware that time is slipping away. As the sun continues its arc across the sky we decide that we should start to head back north to the ferry pick-up sight. With the wind at our back and sand scrunching beneath our feet, we head north. Soon we are walking through what I call the green snot mud, which is really the dried algae blanket which the shore birds love but is treacherous to walk through. It is my one unpleasant memory of this day. We had to cross some of it several times and Dawn and I walked slowly so as not to slip and fall on our bums! The guys must have had better shoes, for it didn’t seem to be a problem for them and they were carrying the scopes! Me? Well, I am ashamed to say, I only had flip flops, the kind with a canvas band which soon wore a blister onto the bridge of my foot! 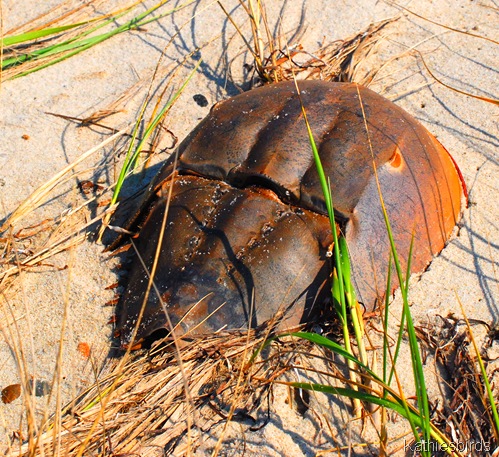 All over the beach I saw the exoskeletons of horseshoe crabs. Most were small and still translucent but along our way north I found this large dark beauty, a reminder of the life and death struggle to survive in all of nature. 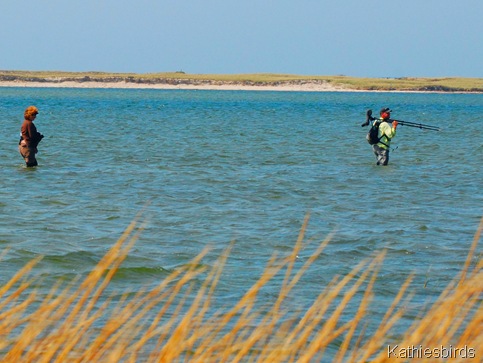 Our journey north up the west side of the island takes us across the now flooded mudflats we walked across when we first arrived. High tide arrived a couple of hours ago and is now back on its was out again. This part is fun, though slow going. I would rather walk through water on soft sand than on dried green snot mud! 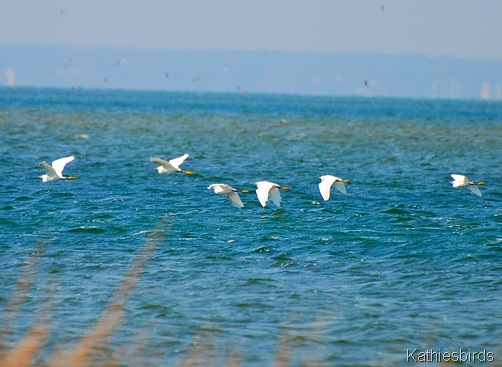 Snow on the water.

We have seen a Northern Harrier coursing over the dunes throughout the day but now we are seeing white egrets rise and fall in flight. From a distance it is hard to tell whether they are Great Egrets, or Snowy Egrets, but when this flock passes close to shore we can see the black beaks and legs with the characteristic yellow feet of the Snowy. It makes me smile to think of them as “Snow on the water in summer!” 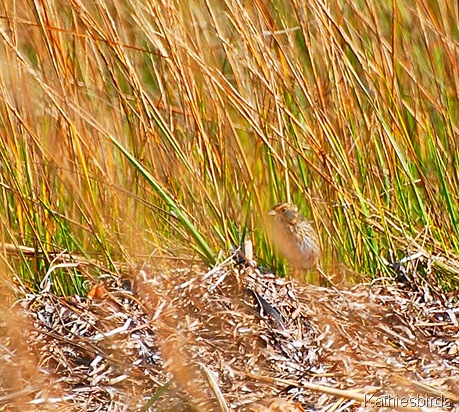 It is while we are hiking through even more dune grass that someone spots a Saltmarsh Sparrow. We all freeze and train our bins on it, for this is a shy and elusive bird. I am told they usually fly up and back down into the grasses, disappearing swiftly, but for some reason this one stayed up and out on this grass mat giving all of us a relatively decent look and me some okay photos. Still, I am pleased to see yet another Life Bird! 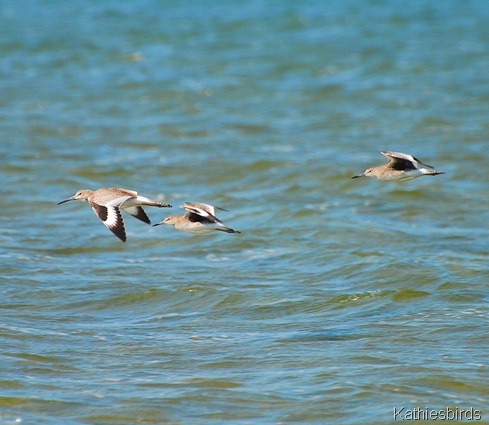 Eastern and Western Willets in flight.

We are seeing so many birds and when we come upon a trio of willets it is Matt who points out that one of them is the western subspecies while two are eastern willets. For now the two are lumped together as one species but you never know when they will be spit into two separate species. The western willet is taller with with a longer neck, longer legs and a longer bill. This bird species appears rather plain and dull looking until it takes flight which is when it shows off its spectacular black and white wings. 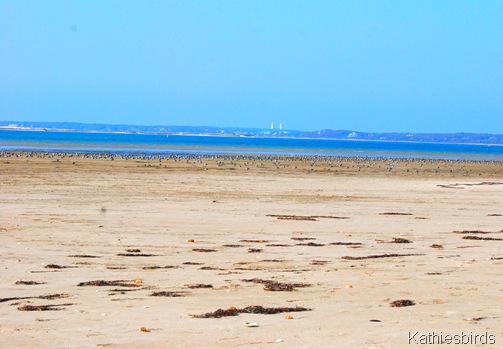 As we walk along I feel my legs getting heavier and heavier. We have been out in the sun all day and we have hiked 3 to 4 miles through sand, marsh and water. As we near the pick up point we come upon a cove with hundreds of birds! If I thought I was trilled to see one black-bellied plover, now I am seeing hundreds! Mixed in with them are dunlins, red knots, short-billed dowitchers, whimbrels, and numerous plovers and sandpipers! But we are running out of time. We cannot linger long! The boat is almost here! And so we take a few quick looks, a few quick shots, and hurry on our way. Matt or Jeff Called the captain and told him we are running late. It is almost 4:30 P.m. when he finally picks us up. We have been here for almost eight hours and it has not been enough time! 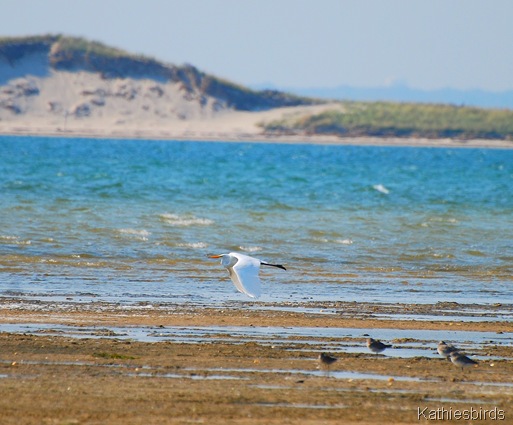 My legs feel like they are about to fall off as I wade out to the boat and climb in. Though I am tired and ready for a hot meal, I am reluctant to leave this island wilderness. I want to linger longer. As the boat pulls away from the shore Matt points out the thousands of Tree Swallows swarming over the dunes. From where I sit, and without my binoculars raised, they look like swarms of flies or mosquitoes, but I know they are something more pleasant than that. They are birds. I cling to the colors of this day. I carry the memory in my heart and relive it as I drive home. There is salt and sun, sand and sea, and kelpies in the waves smiling at me as I watch the birds.

Thanks Dawn, Jeff and Matt for a truly magical day! And don’t you think every day should be magical in…

*Life Birds: As mentioned I added 15 Life Birds to my Life List on this trip. For those of you new to birding, a Life Bird is the first time a birder has seen a particular species. These are the new Life Birds I saw on this day: