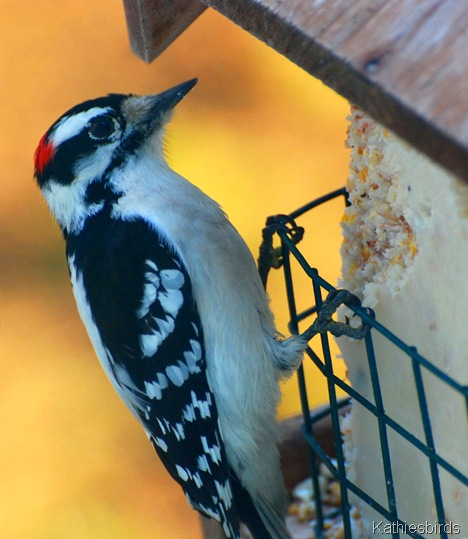 We are all familiar with the adorable Downy Woodpecker most often seen at our backyard feeders. As the smallest woodpecker in North America, this little cutie is familiar to even non-birders, with a nationwide distribution that extends up to Canada and Alaska. So it was no surprise to find one on my recent trip to New York City in Central Park. 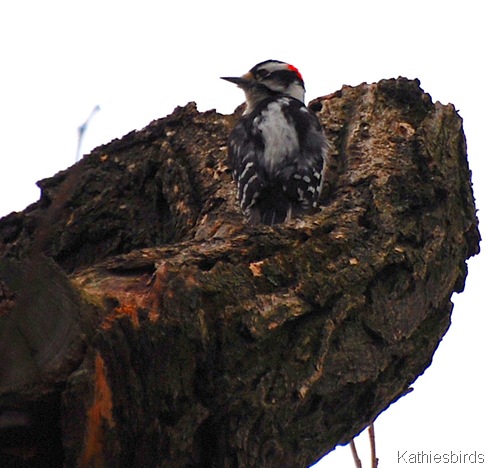 However, as soon as I saw this Downy, I started thinking that there should be Yellow-bellied Sapsuckers around also as migration was starting and with the warming weather, the sap was starting to run. While Downies do not migrate, sapsuckers do since their food source is seeds, fruit, sap, and the insects that get trapped in it. Though I searched high and low through the heavily wooded “Ramble” in Central Park I did not see a single sapsucker. However, as we headed for the Jacquelyn Kennedy Onassis Reservoir to search for ducks and other water species we had to cross an area know as the Pinetum, which is an open park-like area with lots of tall pine trees mixed with deciduous trees. As the edge of the reservoir came into view I saw movement out of the corner of my eye high in some sort of deciduous tree. With little more than a glance, I knew I had my sapsucker. 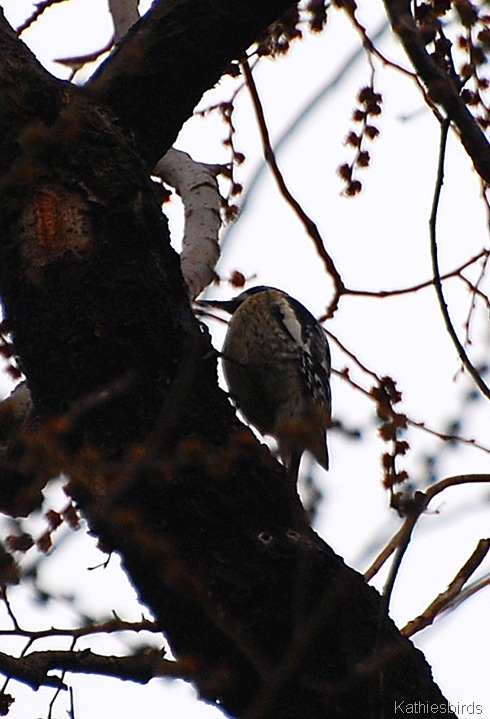 This is what I saw. 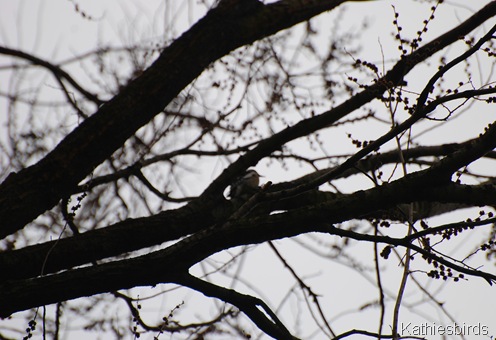 This is how high up it was. I had my 70-300mm zoom extended as far as it would go, so how did I KNOW the bird I was seeing was a sapsucker? 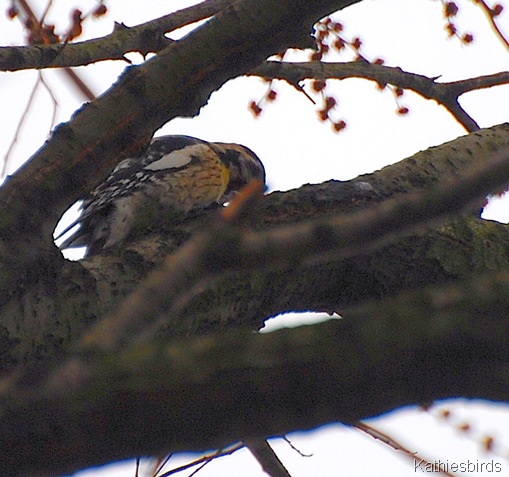 Well, the first clue is that vertical white stripe on the folded wing. 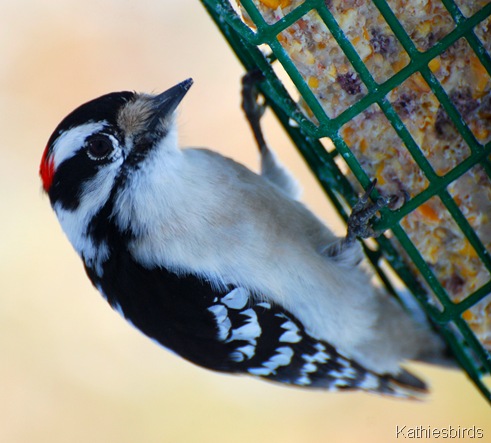 Notice how this Downy has black wings with white barring? 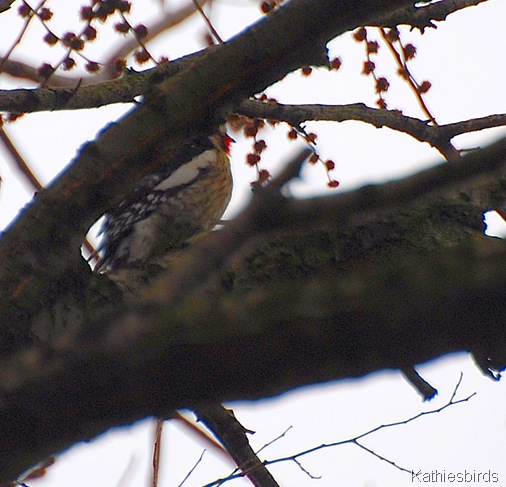 Yellow-bellied Sapsucker in Central Park (You can see a bit of the red throat.) 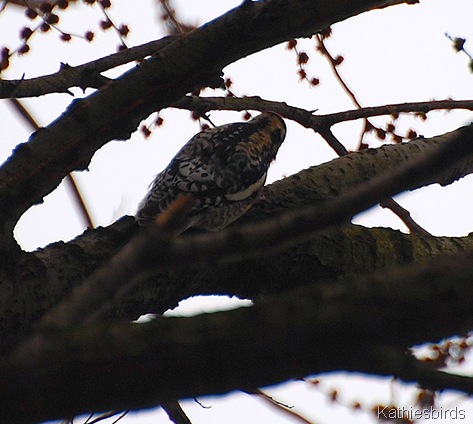 Here is a good view of the Yellow-bellied sapsucker’s back.

So where is its yellow belly you ask? Well, you rarely get to see it since it is down between its legs and the bird is usually high in a the shade of a tree clinging to the bark with its belly pressed against the trunk! 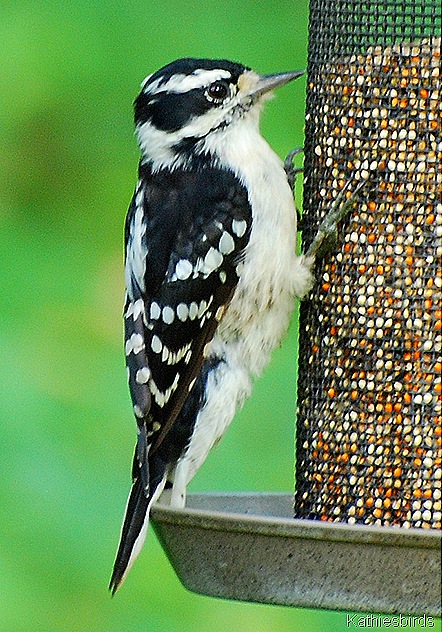 Female Downy at my backyard feeder. Notice the white patch on back. 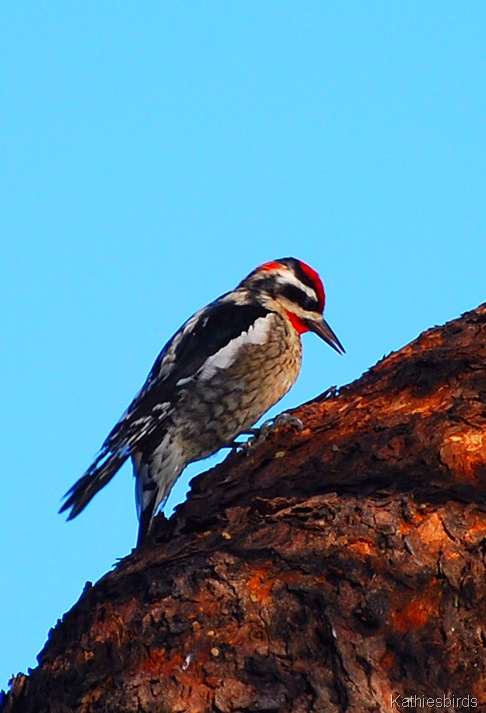 This is the Red-naped sapsucker of the west, which is similar to our eastern variety, yet differs in its red nape for which it is named and a few other subtle differences. They use to be considered the same species and will interbreed where their territories overlap. The female red-naped sometimes has a white chin, bordered by the red throat and then black. Sometimes she is missing the red nap. 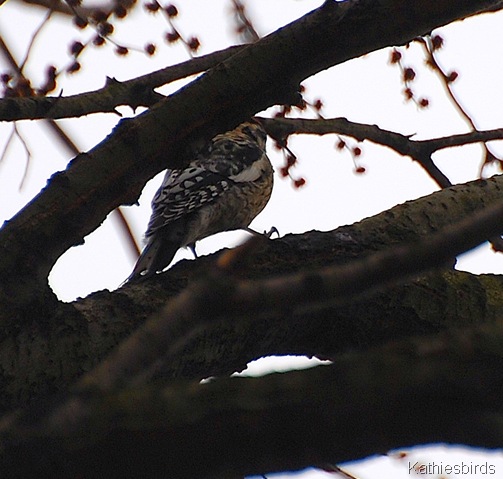 So, when you see that white vertical stripe on that black and white woodpecker, think “Sapsucker” and not “Downy” or “Hairy.” Yes, there is also a Hairy Woodpecker that looks like a larger version of a Downy Woodpecker but that is another post! Seeing this Yellow-bellied Sapsucker in Central Park was such a thrill for me because I had never seen one in New York State anywhere, so it was a new species for my New York Life List! 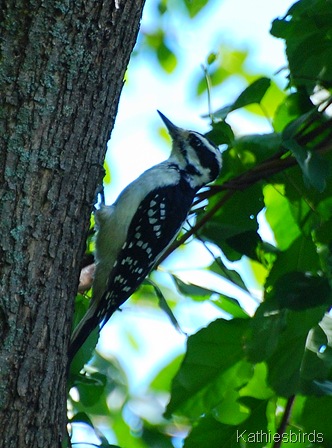