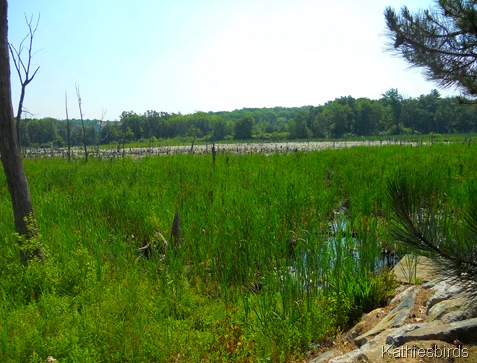 Bog looking southeast from where I stand at the NW corner

With summer in full swing I continue to count birds at the bog at least once a week for the eBird Site Survey. It has been almost 2 years since I first started counting birds here and in that time I have recorded 70 species at the bog. So far this year I have observed 53 species of birds at the bog. Even though things can be pretty quiet here at this time of year I still average 20 to 22 species each time I come here to count. In that space of time I have been surprised at some of the species I have seen and some that are painfully absent. It took almost a full year before I finally saw a kingfisher here, yet now I see them on a regular basis. However, I thought there would be more warblers here. Sadly, there are not. Other than the occasional common yellowthroat in summer, I have only seen warblers here during spring and fall migration. Another bird I look for on a regular basis but have yet to see or hear is a pileated woodpecker. While neighbors tell me they have seen the bird here, it has eluded me. I have also never seen any of its characteristic rectangular feeding holes chiseled in any of the trees surrounding the bog. 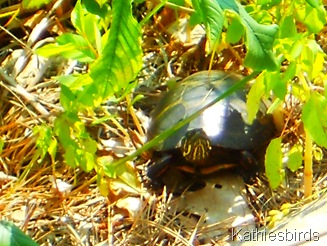 Turtle at the base of the rocks

On this Friday evening when I went counting birds at the bog I was standing at my usual spot at the northwest corner where there is a break in the guardrail. I passed through the pine tree branches as if going through a doorway and stood on the bank. This is the highest point on this side of the bog and it gives me a fairly good view over most of the open space. However, as I stood there I heard a rustling at my feet. Upon looking down I watched this turtle emerge from the grass. I only had my Coolpix point and shoot camera with me, but I zoomed it in as far as I could and snapped its picture. Turtles are just one of the few surprises I find at the bog. After finishing my bird count, I walked home, took off my binoculars and dropped off my camera, then decided to walk back past the bog into the surrounding neighborhood and up past the entrance to Den Rock Park. As the evening gave way to dusk I was delighted to see the tiny flashing of fireflies along the edge of the woods and over the bog as I walked back home. It filled me with such delight and longing that it inspired me to poetry. 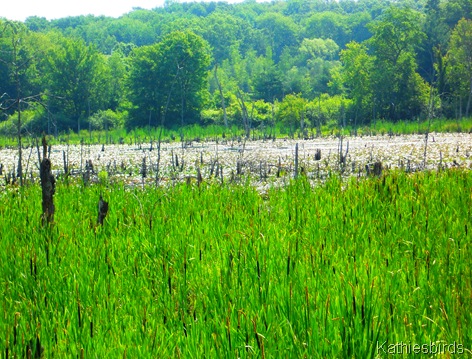 Looking east toward Doctor’s Park and the condos

In the muggy, humid air of summer

I watch the fireflies dance

Above the soggy, boggy swamp,

And point their fuzzy cinnamon spears to the sky,

I watch the insects flash and fly

And listen to the bullfrog chorus

Croak a song more ancient than

And still the fireflies blink and flash,

A primitive dance, a primal thing,

Of earth, and skies and seasons,

The pulsing rhythm of life,

The mating rite of summer. 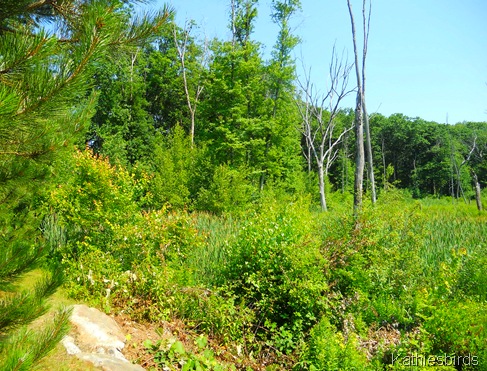 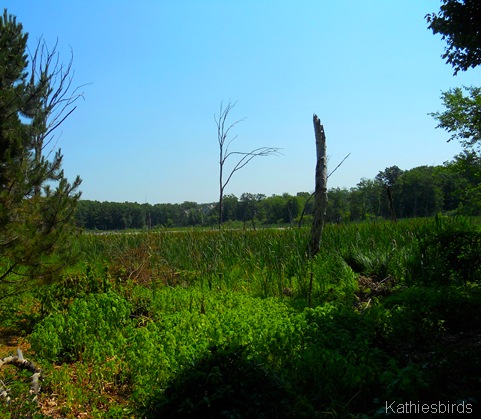 View of bog from southwest corner

Want to see more birds? Come visit me at Birding is Fun where I am posting about the Wonder of Owls today!