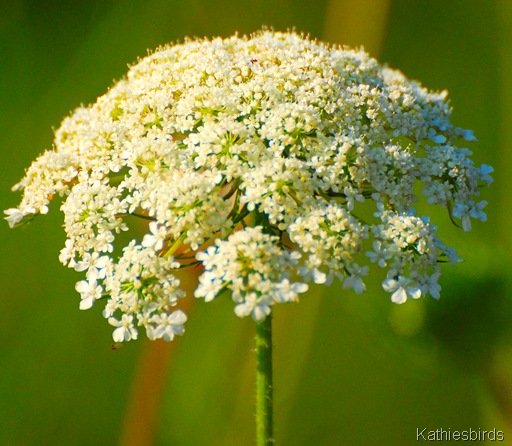 When I was in Connecticut last week Dawn Fine invited me to go birding with her at Bluff Point State Park in Groton, CT. I drove down to pick her up and off we went. Though it was a hot and humid day, we left later in the evening when it was starting to cool off, so it wasn’t quite so bad. I have never been here before so I was quite excited to see and bird this place. Dawn said there was a chance we could see Blue-winged Warblers here which only heightened my anticipation! I have only seen this species once in my life when I went to the New River Birding and Nature Festival in West Virginia in 2009. If we did get to see one it would be a first for my Connecticut Life List! We barely pulled into the parking lot and we started to see birds! They were everywhere! I couldn’t get my bins and camera on fast enough, but then I stopped to photograph this amazing Queen Anne’s Lace which was growing right along the edge of the gravel. It is one of my all time favorite wildflowers! 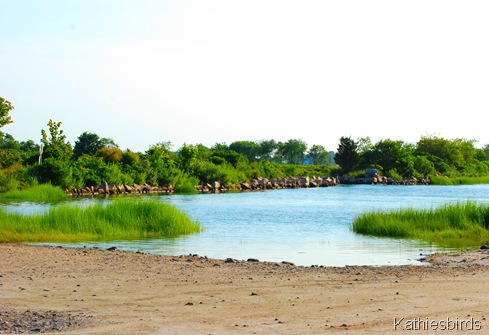 Goldfinches, swallows, morning doves and waxwings flew over our heads as we walked to the water’s edge. While we did see a couple of seagulls, we really didn’t see many of them and we saw no birds out on the water or along the water’s edge. 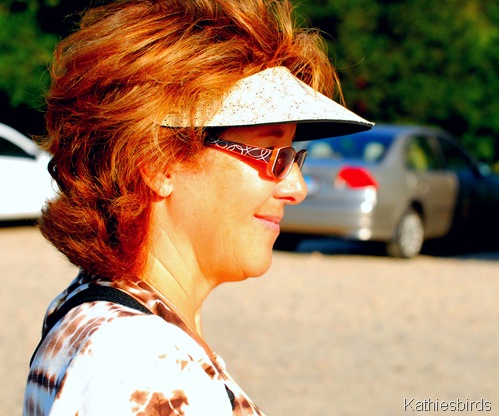 I followed Dawn as she led the way. A few song sparrows flitted about near the edge of the grass and the shrubbery. 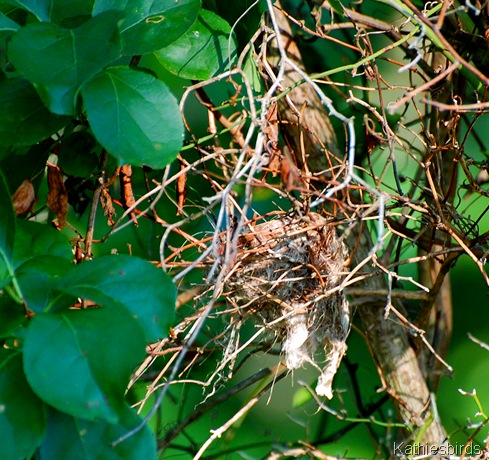 But Dawn had a destination in mind as she led me to a spot at the edge of the woods where an American Redstart has its nest. The nestlings have all fledged now but we were still able to see the tiny nest woven tightly in the tangle of vines and twigs. 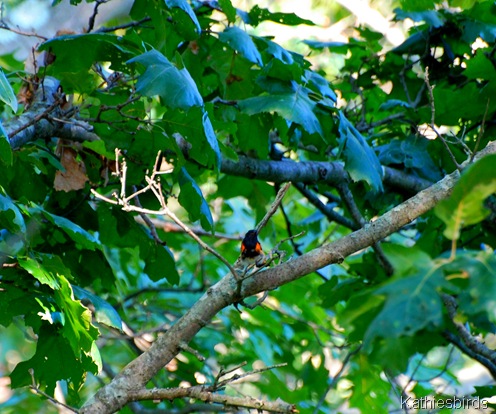 And then we found an adult male Redstart high in the tree canopy. Its tiny black body would disappear in all this greenery except for the bright orange patches on its wings. 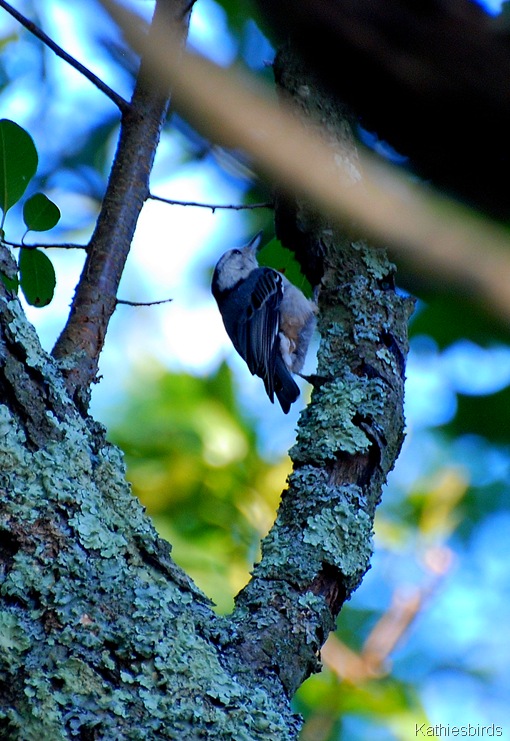 Right near the redstart a White-breasted nuthatch stopped by to see what we were up to! We are bird watching, we told him, and thank you for stopping by to see us! Dawn checked off the birds on her Bird Log app while I wrote them down in my little notebook. Bird Log is an easy way to count birds in the field and upload the list directly to eBird. I must confess I have been reluctant to try it fearing it would not work quite so well or that it would drain my battery too quickly but I might be ready to reconsider this after seeing how easy it was. Because Bluff Point is already an eBird Birding Hotspot Dawn could easily locate it from the list instead of trying to find her place on a map. While I am good at doing that, I understand that some people just are not able to see things from an overhead perspective. There are lots of things that I am not good at, like math. Don’t ask me to do algebra for you, but I can certainly count birds and write poems about them! 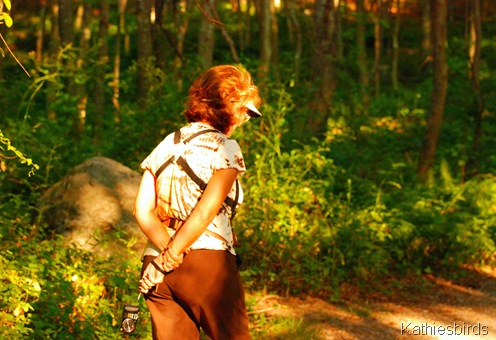 As Dawn leads the way up the woodland path we are seeing and hearing all kinds of birds. Robins and Eastern Towhees are the most numerous, but we also see blue jays and red-eyed vireos. We hear an Ovenbird and some Common yellowthroats. Veeries call from the woods and later on we even hear a Wood thrush! 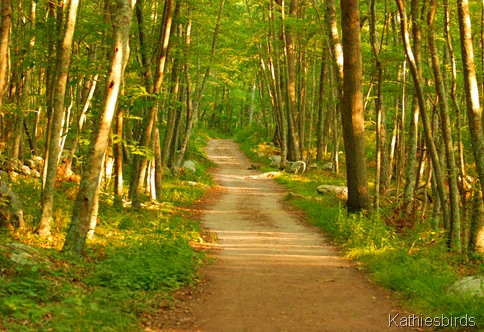 We finally find a lone chickadee and we are seeing catbirds everywhere. Amazingly, we do not see many woodpeckers in the midst of all these trees! 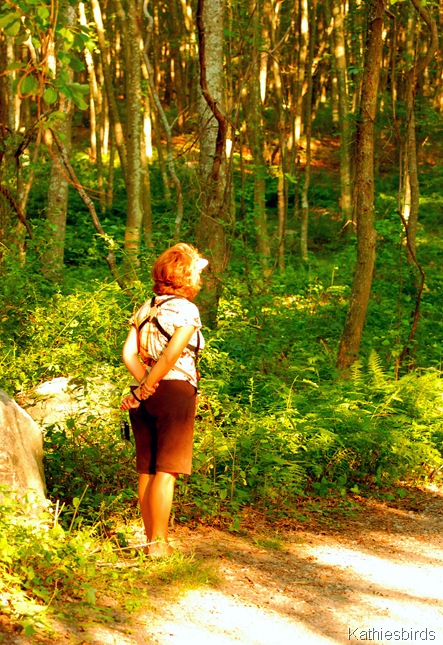 Then Dawn hears a strange call and we stop, trying to figure out what it is. She has her iTouch and I have my smart phone. It sounds like a flycatcher so we both pull up our birding apps and listen. From what we can hear, it sounds like a Willow Flycatcher! We compare several flycatcher calls, but it is the only one that seems to fit. We try and try to see it but the trees are too thick and it is across the woodland to our left, so we keep on walking. We both enter this species into our bird counts but it isn’t until later that I discover this is a Life Bird for me! I have only heard it and not seen it and I would really like to see one, so it’s kind of a listing with an asterisk for me. I only have 3 species on my Life List that I have only heard and not seen and the other two are Swainson’s Warbler and Sedge Wren, both heard in West Virginia in 2009. I actually saw the sedge wren fly briefly across the wetlands where we were birding but I did not get a very good look at it. 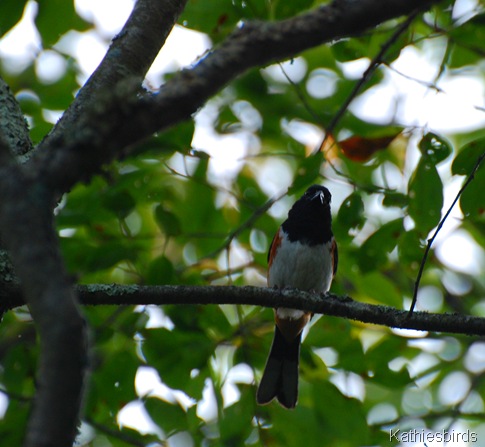 The trail continued on through the woods and into an open area where we saw several swallows. A great egret flew overhead and we heard some titmice. As we continued around the bend the shadows deepened and we saw a young white-tailed deer on the path ahead of us. Finally we emerged near the water and the trail started to wind its way back toward the parking lot, but we still had almost 2 miles to go! Here in the brush by the water a yellow warbler called. As Dawn and I stopped to identify the bird was saw a fledgling yellow warbler with a wide yellow gape begging for food from the adult! I have never seen a baby yellow warbler before and it was so cute! We watched the young bird for a few minutes more, then hurried down the trail as fireflies started flashing from between the tree trunks. The dark shadows deepened and the path became a faint gray ribbon beneath our feet. There were no more birds to be seen now as we hurried towards the parking lot but amazingly we still passed a couple of people. First a woman came by talking loudly on a cell phone, then a few minutes later along came a man. When we did emerge in the pale light of twilight at the edge of the trees we saw only three cars still in the parking lot. Ours was far across the expanse but these two were parked right next to each other at the edge of the woods. A rendezvous perhaps? Who knows. We let ourselves speculate as we hurried through the darkness to our car and hoped in and locked the doors! We never did see the Blue-winged Warblers but we sure had fun! 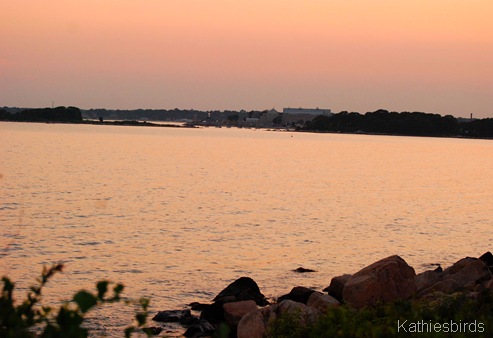 Later on when we were back in Dawn’s Homey we drank sweet wine and chatted like two teen-agers and the friends that we are. I first met Dawn two years ago when she and Jeff were visiting Tucson. She was one of the first people I ever met through my blog and I was a bit cautious that day I drove up to Catalina State Park to meet them. Within five minutes I knew I could relax with these people and before the day was over we were good friends. Since then we have gone birding together several times and each time I feel that we grow closer together. So thank you Dawn for including me in so many birding adventures. I feel thankful and proud to call you my friend!

After I entered my bird count in to the eBird data base I was quite surprised to see that Dawn and I had the only bird counts for that week in July! In fact, almost all of the data that has been submitted to eBird for Bluff Point State Park is during spring and fall migration. If you go to the eBird website you will see that they are having a contest right now to get more people to submit bird counts during the summer, which is their slowest time of year. They are nearing the 100,000,000th checklist and the person who submits it will receive a prize. You can read all about it here: eBird 100,000,000th Challenge

Meanwhile, if you would like to check on your own birding data or the birding data of any state, country region or hotspot, just go to eBird and click on the Explore Data tab. From there you can click on Bar Charts and from that link you will be given several options. Once you pick one a bar chart will come up showing all the bird species seen for a specific area. Next to the name of each species will be a button that says “Map.” Click on that button and it will show you where that species was recorded. If you pick a birding hotspot and the bar chart comes up with grayed out areas, that means that no data has been submitted for that time period. I often get lost in checking on this kind of data. I suppose this is what drives my obsession, because I can see that the lists I submit really do make a difference.

Dawn and I recorded 33 species plus 3 other taxa on July 12, 2012 at Bluff Point State Park. We walked a 4 mile loop and were there for two hours. Here is the list of the bird species that we saw:

On another note: I just realized that today is my Blogiversary! Five years ago today I started my Sycamore Canyon blog! Two years ago on July 27th I started Kathie’s Birds as I prepared to move back east to Massachusetts. Now here I am preparing once again to move only this time I am heading back to Tucson! Life sure is funny. I wonder where my blogging and birding will take me next! If you are interested you can read my very first blogpost here.