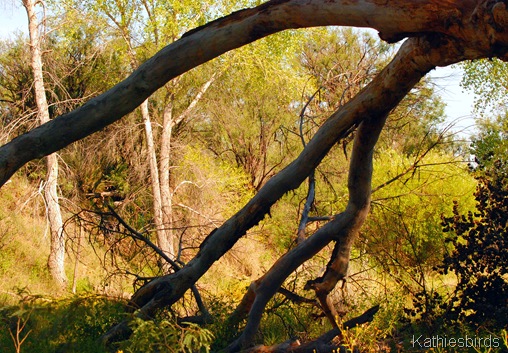 Anyone who has ever been to Empire Gulch to bird is familiar with the tall cottonwood trees and the downed limbs by the parking lot. It seems that even more limbs had come down since I was last here over two years ago. Now as Chris and I drove into the parking lot I was eager to see what the place looked like. Would it be like I remembered, I wondered? As we parked the car a park ranger pulled in behind us. He told that a harem of antelope had just crossed the road up by the Empire Ranch. We had just come from there! How could we have missed them? Chris and I jumped back in the car and drove the short distance back to the ranch. 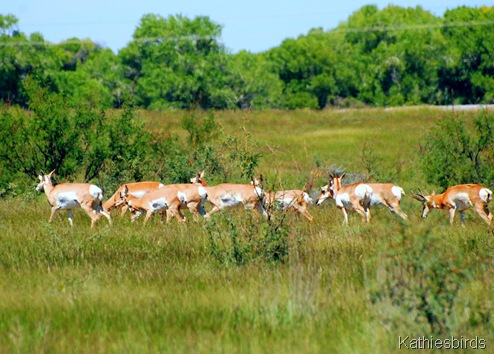 Sure enough, there were the antelope making their way across the grassland with the male at the back driving his harem before him! 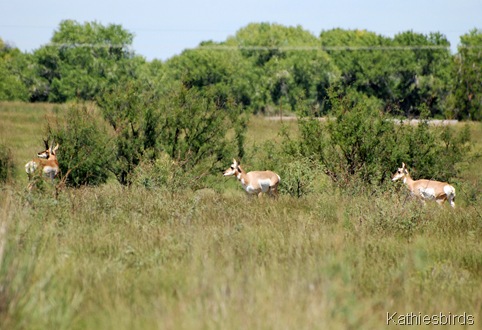 We stayed in my car and shot photos out of the open window. 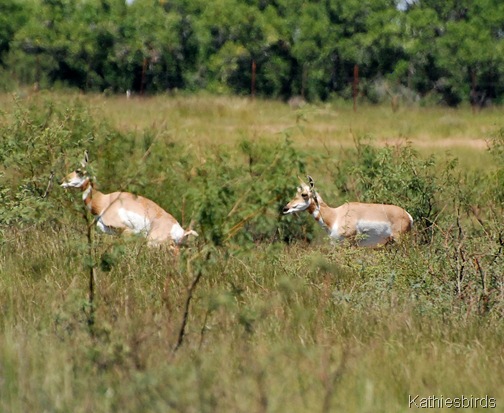 Finally the antelope took off, gracefully leaping over a fence. 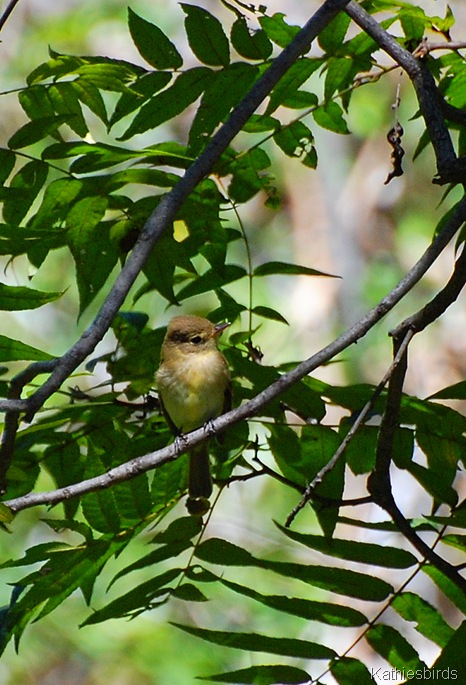 So back to the gulch we went, where a creek flows year round and the birds gather to feed in the cool shade of the tall cottonwoods, willows, and Arizona ash trees. So many species of birds can be found here at various times of year. Since it was the middle of the day by now we were wondering what we would see as many birds become inactive during this time. So, we were quite pleased when we found this Cordilleran Flycatcher in a tree. 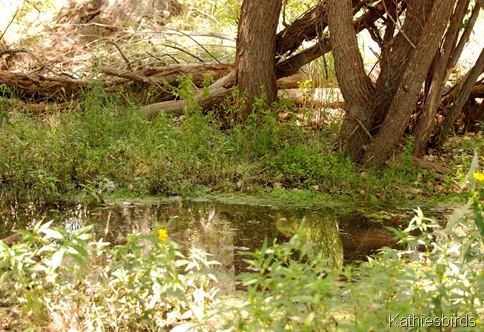 The creek flows still and quiet through the deep shade forming shallow pools. 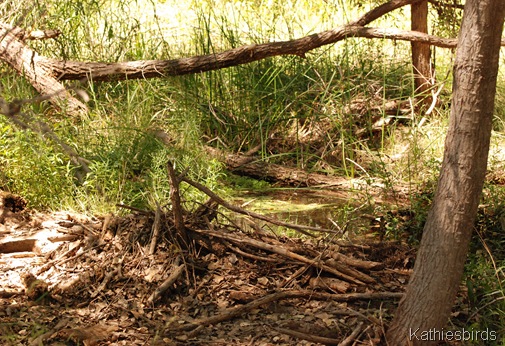 Debris is heaped alongside the creek, evidence of times with higher water flow. 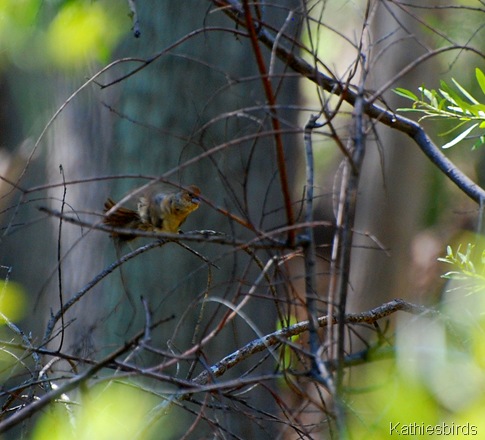 Deep in the shade I find a female Blue Grosbeak having a bit of a stretch. 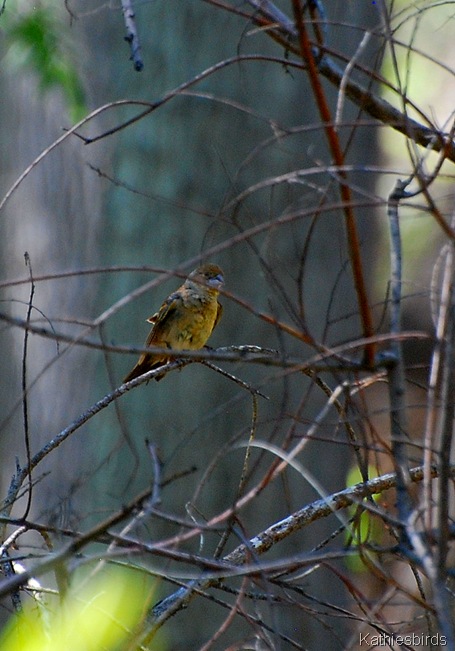 After fluffing herself out she settles back down on her perch again. 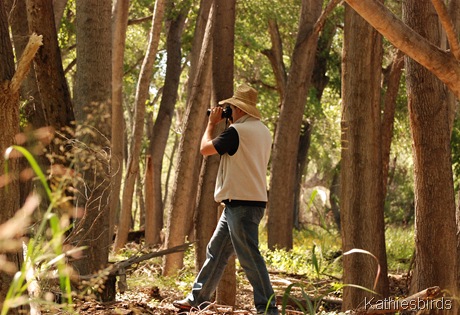 Though this picture does not show it well, Chris climbs high on a downed tree to get that perfect shot! The day is getting late and I am losing energy. All this fresh air, sunshine and birding excitement has worn me out! We decide to call it a day, and head back to my car. 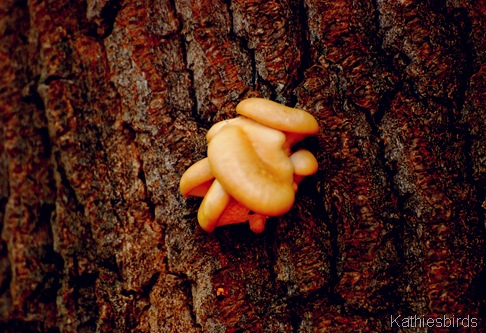 On the way we spot this slimy brain fungus growing on a tree trunk. 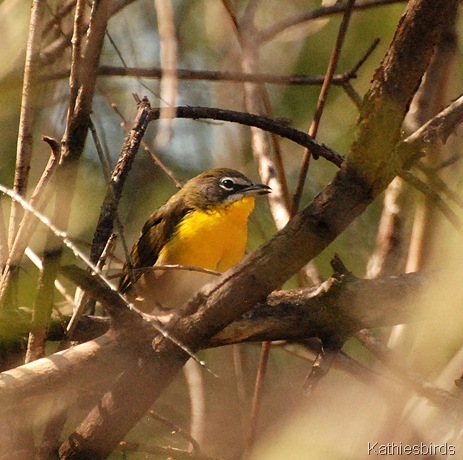 Down near the creek we spot a Yellow-breasted Chat! 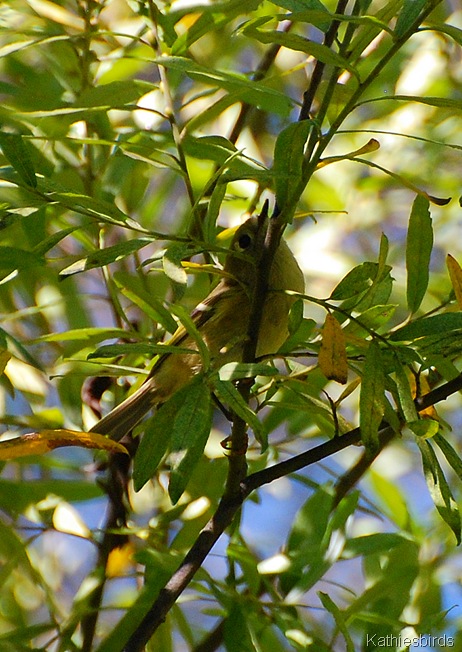 Then, in the thick of the willows we find a Ruby-crowned Kinglet!

It feels like this day has been an epic adventure beginning with Birding on the Greaterville road, then Birding the Empire Ranch, and finally birding along the Empire Gulch! We are both hungry and exhausted but full of the joy of birding!

Click on the links below to for more Birding Fun!

These are the birds we saw on Sunday, September 16, 2012 at Empire Gulch (an eBird Hotspot):

(Plus a hummingbird, 2 other empids and 2 possible bunting species!)

Thanks for a fun day of Birding Chris! It was a great break from unpacking boxes!