A Sweet Sunday at Sweetwater Wetlands 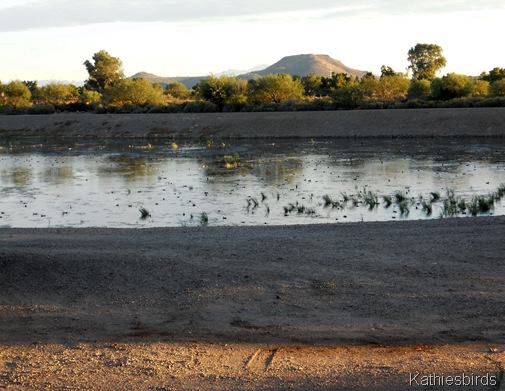 Recharge basin at Sweetwater Wetlands 10-21-12
Anyone who has ever gone birding in Tucson knows that one of the premier places to go birding is at Sweetwater Wetlands on the northwest side of town. When I lived here before it was one of my favorite places to bird. Now, here I am on a Sunday afternoon with my new friend, Chris, going birding here for the first time since my return in August. I cannot believe the thrill that runs down my spine as we pull into the parking lot. We start seeing birds as soon as we opened our car doors. A kestrel greets us in the parking lot, while other birds fly overhead or called from within the wetlands themselves. A warm, golden sunshine streams down on us and I find myself rushing to get my camera, binoculars and fanny pack with notebook, glasses, and cell phone all in place. My heart swells with anticipation of all I hope to see and all the memories of being in this place before. 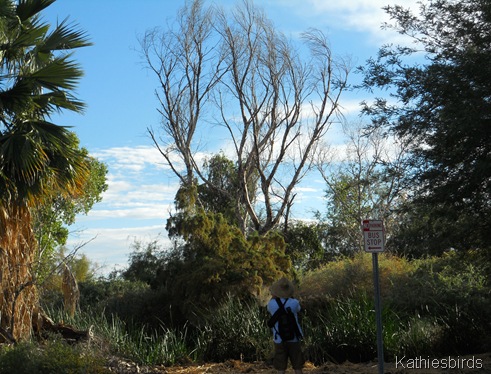 Chris Rohrer photographing the kestrel
Chris and I start the walk over the little bridge and head down the east side of the ponds. I note that a lot of vegetation has been cleared out between the parking lot and the little stream. 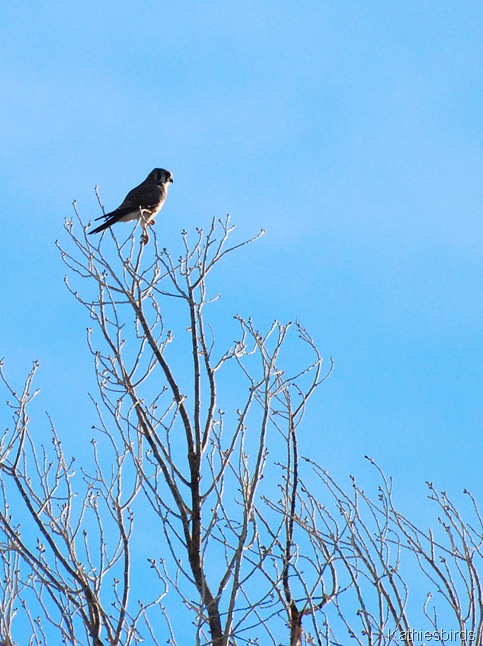 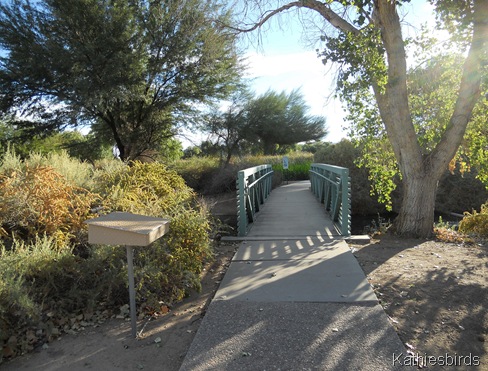 Yet, as we cross the bridge I am surprised by how much vegetation has grown up in the ponds. I can hear birds within the tall wetland grasses, but I cannot see them. A Sora’s whinny rings out through the greenery. Chris and I both listen and marvel at the sound. We see and hear coots, while overhead a variety of blackbirds fly, speckling the sky with their black silhouettes. On a bit of scrub by the stream a black phoebe bobs its tail. Above the tree canopy the pair of kestrels fly from treetop to treetop and back again. 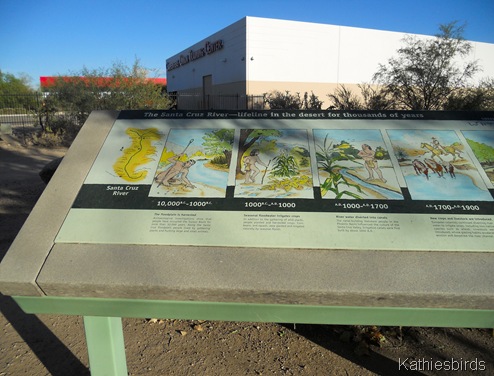 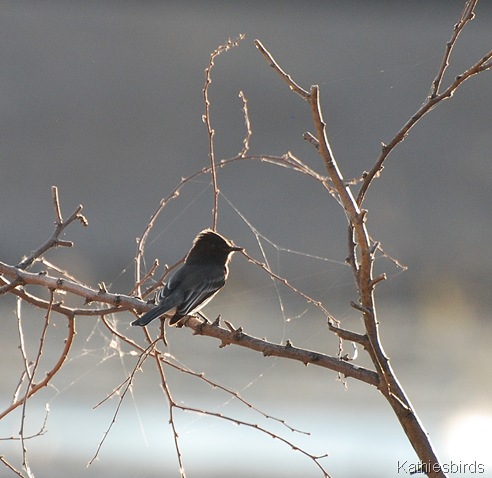 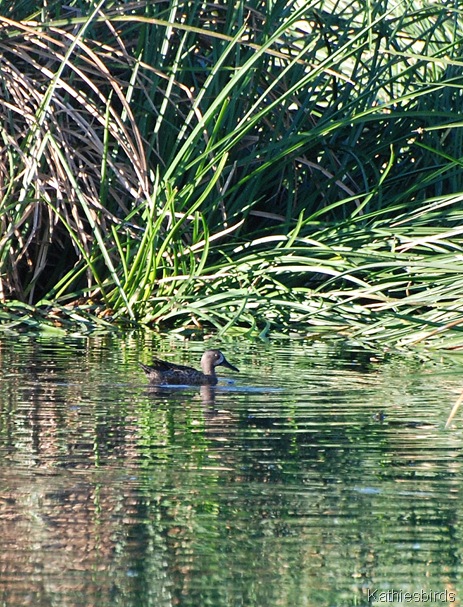 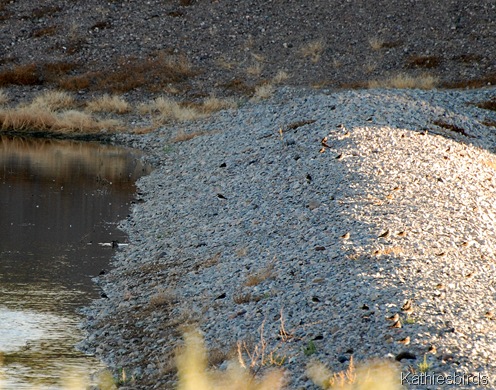 Peeps on the berm
Farther down the eastside path we come to the recharge basins to the east. We can see hundreds of ducks and dozens of shorebirds, but many are too far distant to identify. We try to take a few pictures, but the sun is all wrong and security fences keep us far away from the basins. 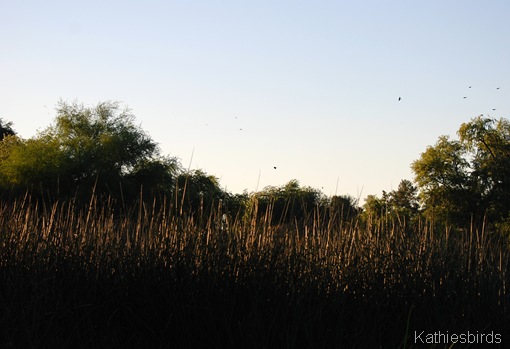 Sweetwater sky
Chris and I walk slowly along the east side, stopping here and there to identify birds or snap a few pictures. The light is fading faster than we both want it to. We arrived around 3:30 but are now wishing we had gotten here even earlier. 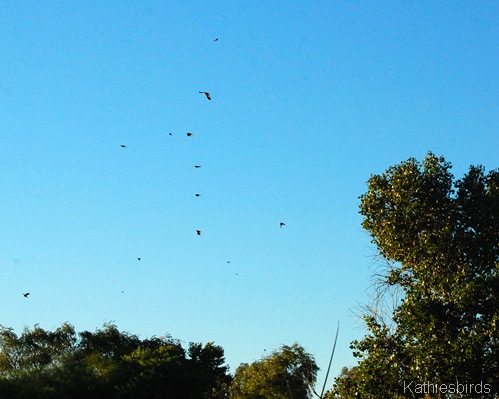 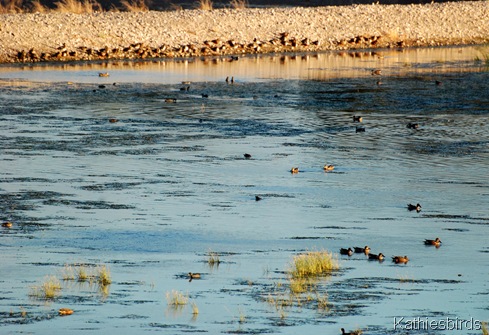 Hundreds of Ducks
It is soon evident that the ducks have returned to Tucson. They are everywhere and in great numbers already. I cannot believe how many teals we are seeing as well as Northern Shovelers, widgeons and mallards. To our great frustration, we can see upwards of 30 tiny peeps down in the recharge basin, but none ever come close enough for us to positively identify other than the killdeer and the spotted sandpipers. Neither one of us has a spotting scope, so we move on. 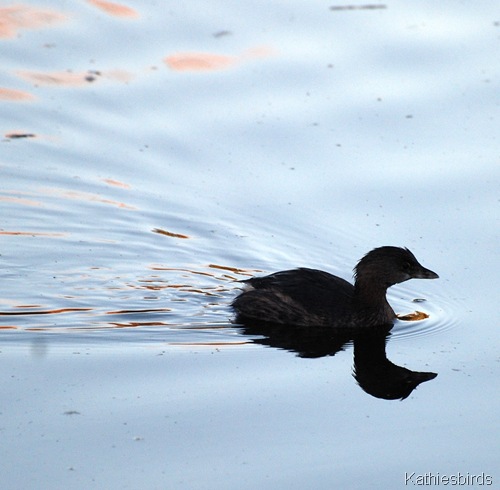 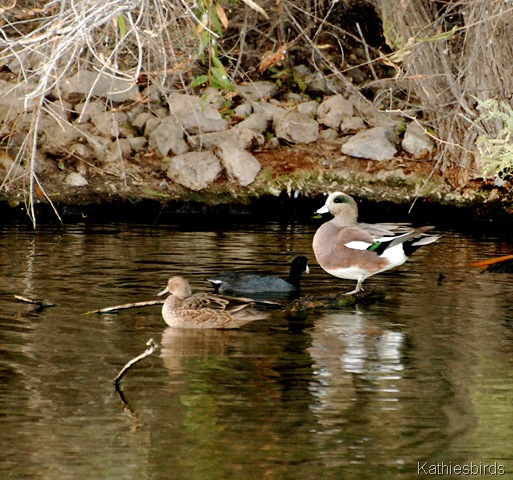 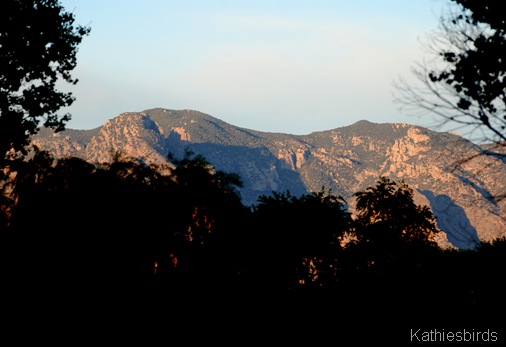 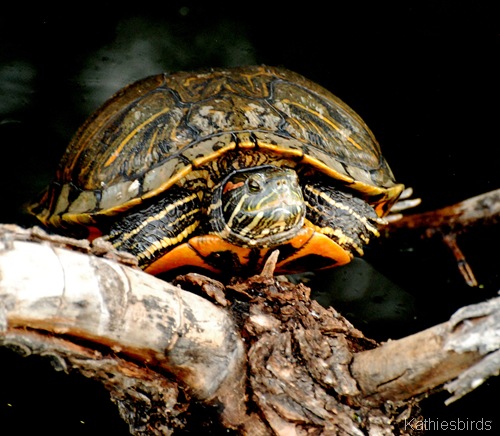 Red-eared Slider
A turtle lounges on a log and a pair of cormorants takes wing and flies away. Long shadows fall across the pathways now and we have only made it down one side of the ponds! We reach the farthest end of the pathway and as we make our turn to the west a Great Horned Owl flies out over the wetland and disappears in the cottonwood trees beyond. 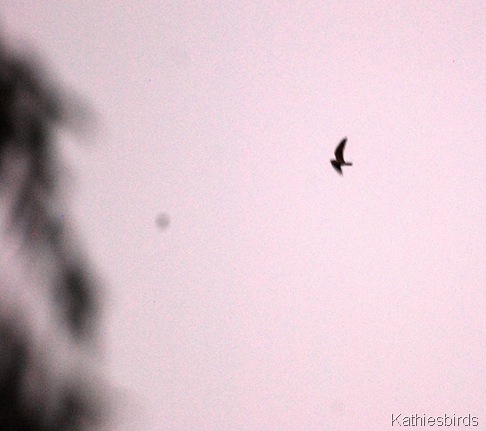 Nighthawk!
As the golden sky fades to rosy-pink and lavender I spot the bat-like fluttering of 3 Lesser nighthawks! I cannot believe my eyes, for I thought they had all migrated south already, yet here they are over our heads and Chris and I are trying to snap a shot of them in the gloaming. It is very hard to get the cameras to focus on their fluttery flight in this low light but we manage to each get a shot or two of their distinctive silhouettes. 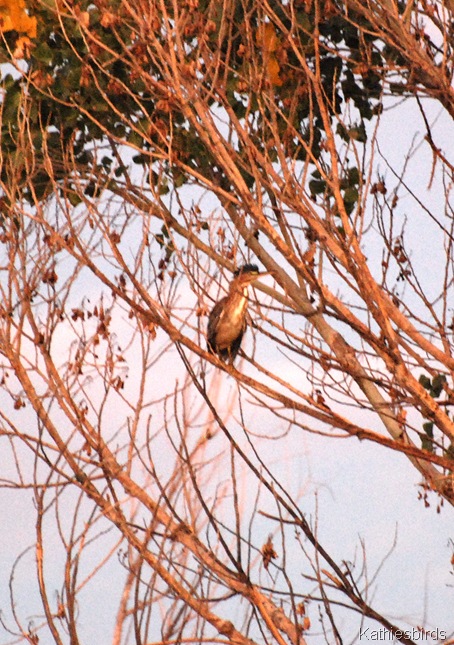 Green Heron
We are barely over that excitement when a Green Heron flies up into one of the nearby cottonwood trees and catches the last rays of gold from the setting sun. I point it out to Chris and he turns excitedly and starts snapping away. The Green Heron is a Life Bird for him! 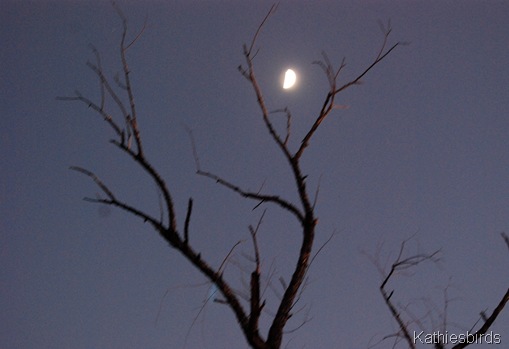 Darkness falls rapidly once the sun has slipped beyond the horizon. Chris and I hurry down the northwest edge of the ponds. I know they lock the gates after a certain point and I do not want to get locked in. In spite of my hurriedness I am also feeling regret. We have been here for two hours and I know we did not see all the birds we could have! I now wish we had arrived earlier! All I can think as we head to the car is, “I need to come back here soon!” I can never get enough of Sweetwater Wetlands! 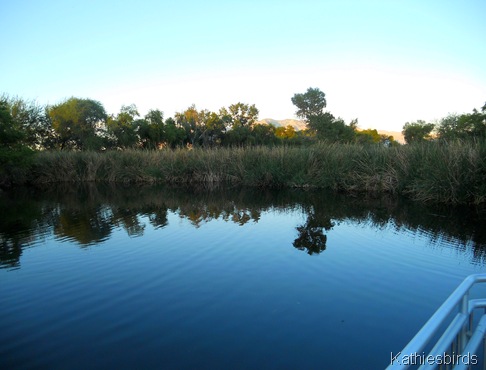 Note: In the end we saw 32 species of birds in the two hours that we were here.
Birds Seen at Sweetwater Wetlands on 10-21-12:
(We also saw additional peeps, 2 cormorant species, and Chris saw 2 avocets but I did not.)
Posted by Kathie Brown at 7:59 PM