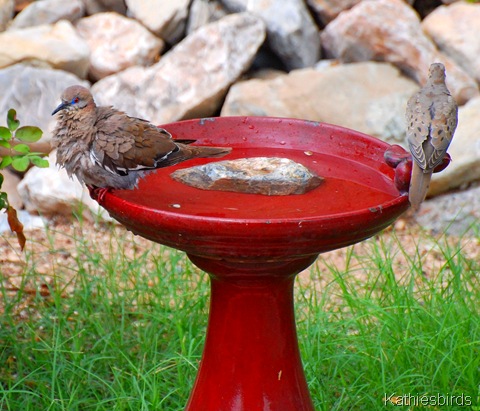 Fall migration has already begun and I can already seen the changes in the bird population in my back yard. While I am still getting a few white-winged doves on and off, I am not seeing as many as I did earlier in the summer. 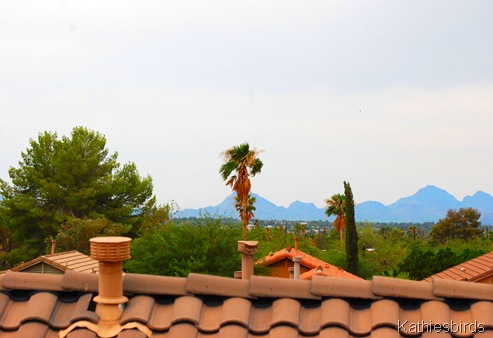 Often when i watch birds I sit out on my balcony. I have good views to the west, north, and east from here. I can see a big piece of the sky.  We are in Monsoon season right now and many days we have high winds or overcast skies. Some days it starts out sunny, then the thunderheads build and the sky erupts in thunder, lightening and rain. On these days it is very humid, for it is the humidity that makes the clouds form and the rain fall. 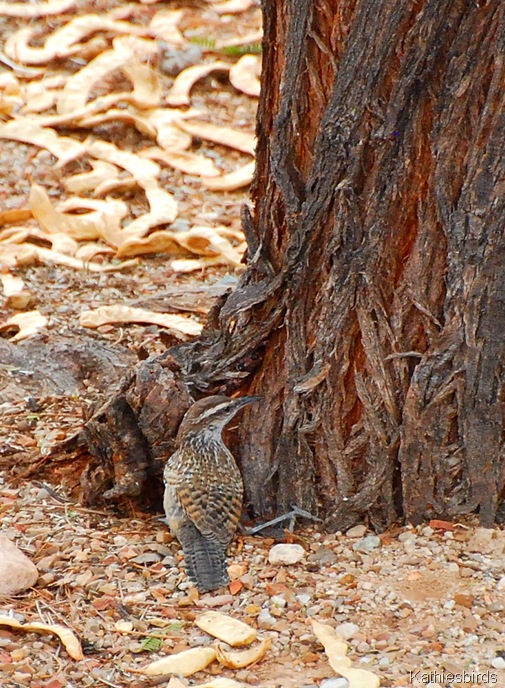 Ever since moving here I have rarely heard, let alone seen a Cactus Wren in my yard or neighborhood but on the same day that I discovered the baby quail and was photographing them from the balcony I also spotted this Cactus Wren in my neighbor's yard. Not only was this surprising, but it turned into quite a drama when it poked that pointy beak into a crevice in the tree trunk and came out with some large squirming thing that looked like a centipede or a scorpion! I don’t know which it was but I took the following series of shots. Since it was an overcast day and the bird was in the shade the contrast is not quite so good, but you can still see the battle that ensued. 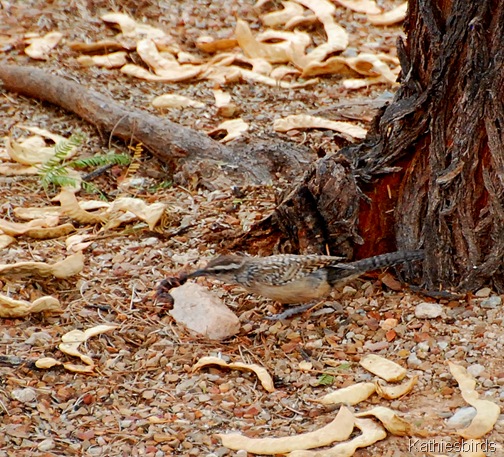 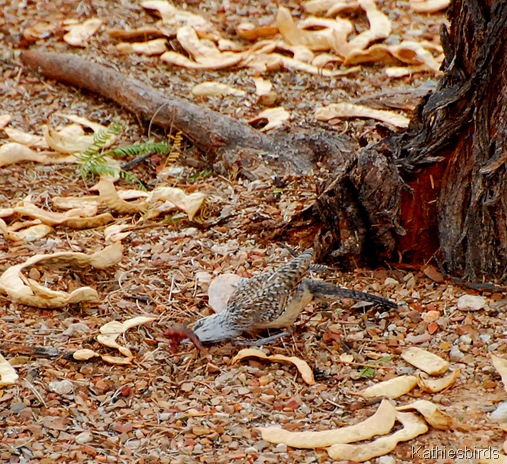 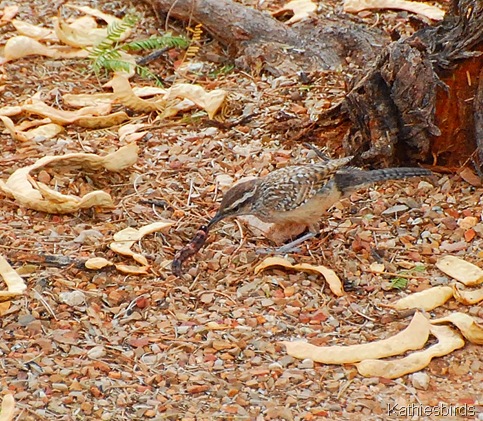 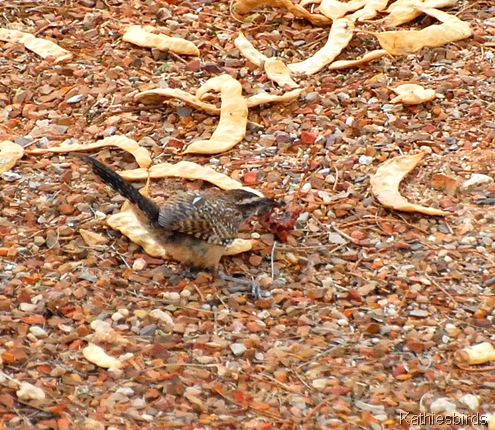 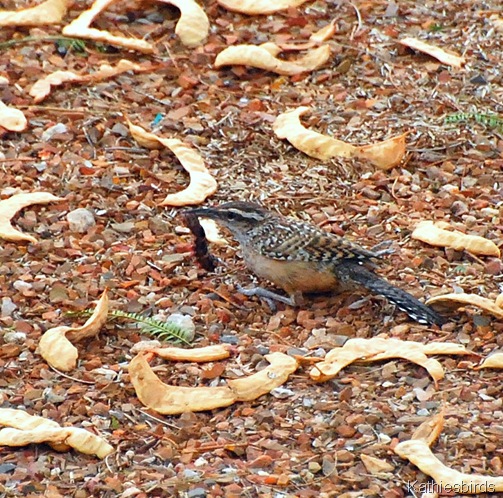 I think the wren finally flew off with the thing and consumed it elsewhere! 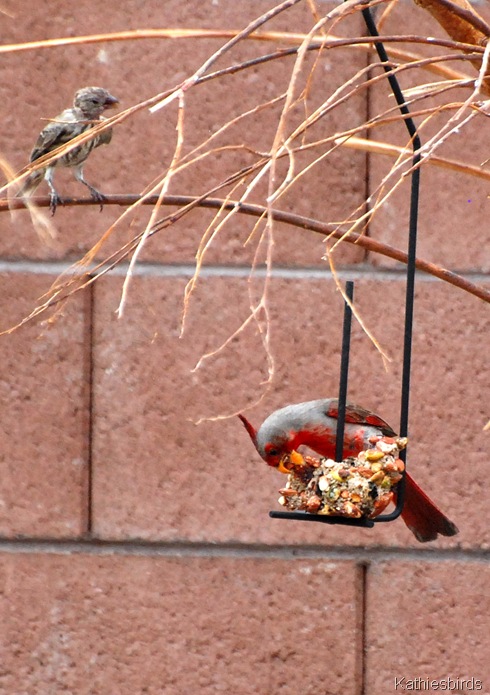 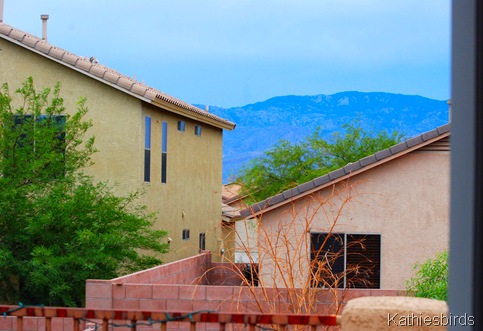 Though it looks like dusk, it is actually 9:30 AM on August 5th. The sky was so overcast that it looked like evening! I love the layers of color in this photo. This is a view to the north of the Catalina Mountains as seen from my balcony. That scraggly thing in back in the wild tobacco plant. The heat in May and June seemed to have killed it off. That is too bad because the hummingbirds love feeding from the yellow tubular flowers this plant produces. I am still keeping it because it is one of the only “trees” in my back yard and the birds love to perch in it. Plus, I have bird feeders hanging from the scrawny branches! 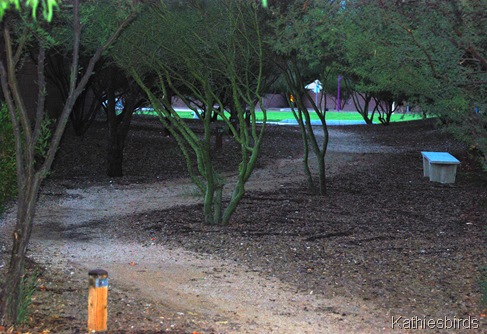 The same evening of August 5th I decided to take a walk through the neighborhood. As I was wandering down this tree-lined path I found a yellow warbler, a vireo, and a Pacific slope Flycatcher! I had only brought my binoculars with me, so I raced back to the house and grabbed my camera but off course the birds either flew off or would not cooperate with me as they stayed hidden deep in the thick twigs and foliage of these desert trees. Finally it just became too dark to take pictures. So I photographed the path instead! One of these mornings I am going to grab my cup of coffee and got sit on that bench and count birds! But it has to cool off a bit more first! It’s still pretty hot here in the mornings with lows that often start above 80 degrees! 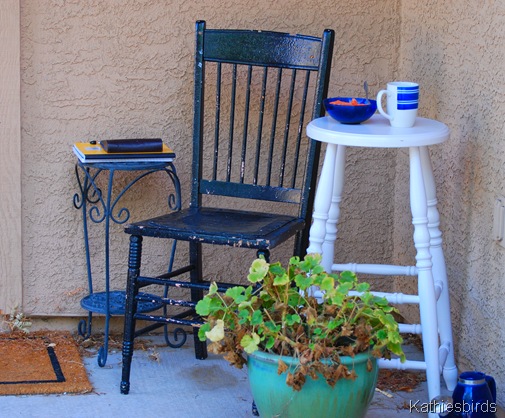 Since my backyard gets the morning sun at this time of year, I sometimes take my coffee or tea and sit in the shade by the front door to watch the birds at the front feeder. I did this on the morning of August 6th and was rewarded with the following species: 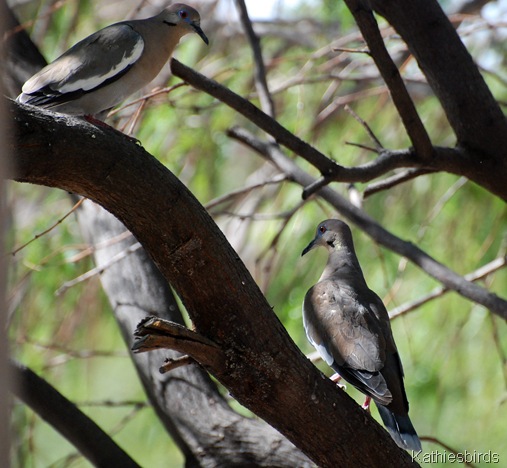 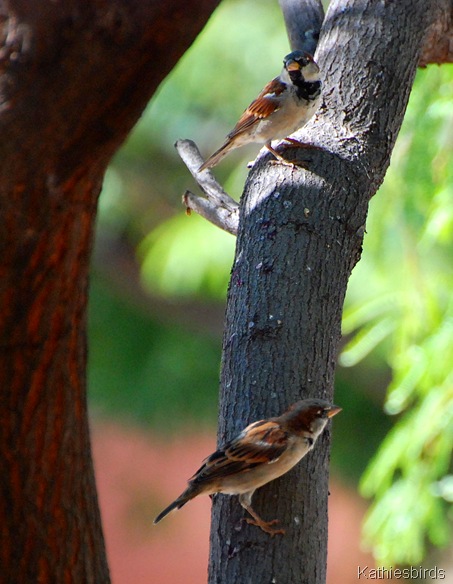 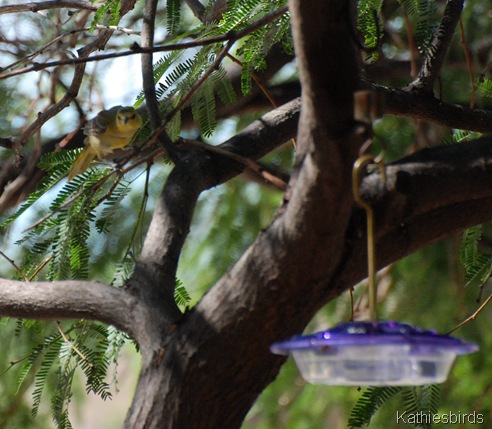 And then this surprise! 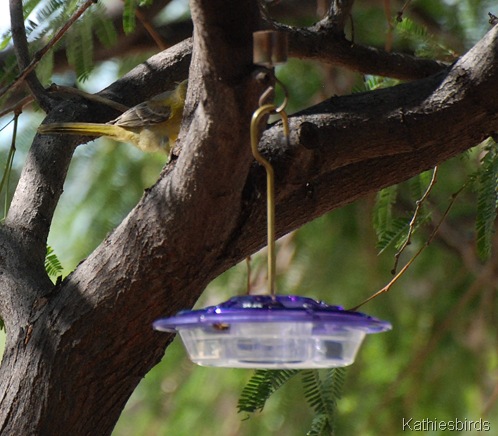 Who is this sneaking up on me? 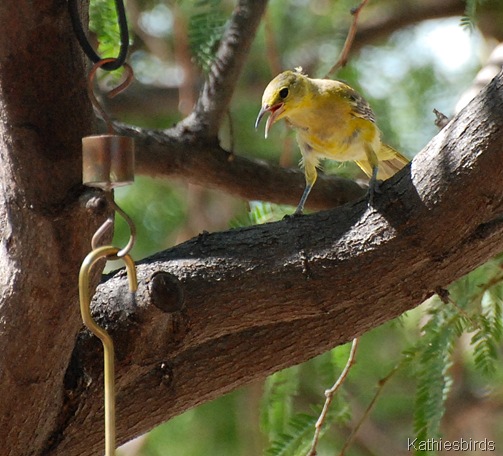 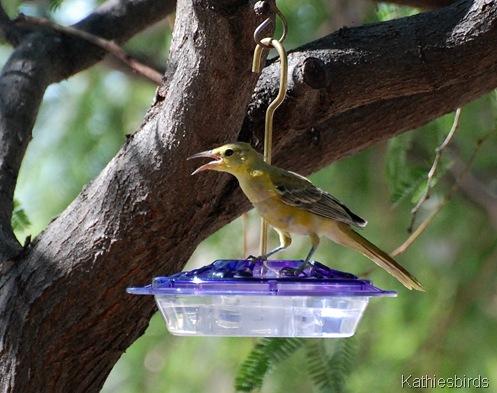 Have you guessed yet? I will let you think about it and post the answer below! 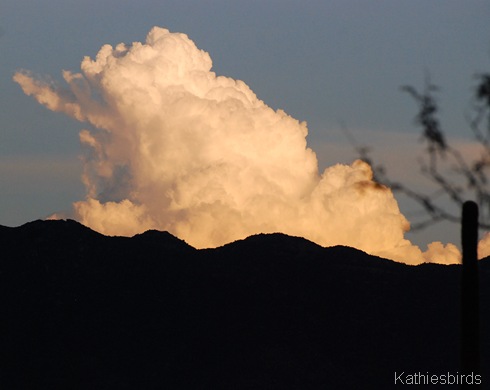 Thunderheads build behind the Catalina Mountains 8-15-13 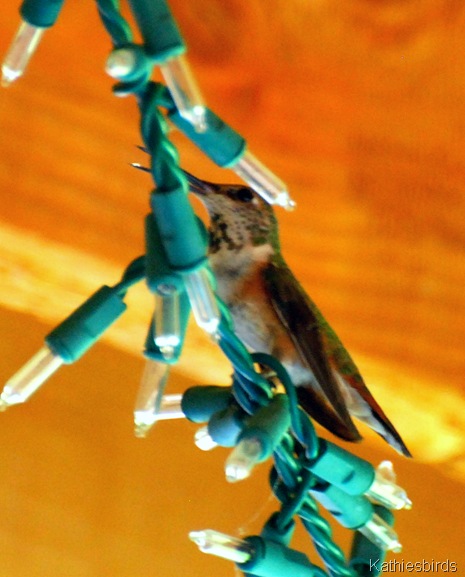 Hummingbird Migration has definitely begun as I have seen my hummingbird population increase in number and species. The rufous hummingbirds are hit or miss. Some days I see several and other days none at all. Black-chins and Costa’s have also been seen as well as the occasional Broad-billed or Broad-tailed. Anna’s are regular here in my yard. The other morning I even think I saw a female Calliope but only got a brief view so I have not added it to the bird list.

This morning dawned cool, gray and soft when I went out on the balcony at 6:30 AM. I was completely surprised this morning when I saw two of the baby quail fly up onto the 6-foot high wall in the backyard and then down into the neighbor's yard! The father was up there encouraging them and the mother was nowhere in sight! Two other chicks we still cheeping from below. Later I saw the whole family reassembled in the yard. It was still so pleasant when I went downstairs that I was able to sit outside on my patio and drink my coffee and watch birds. As I was sitting there around 9 AM I once again saw the parent birds up on the block wall calling encouragingly to the chicks. Once again the chicks flew onto the wall. I have not seen them again!

While I was sitting there, however, a female Bullocks Oriole flew into the desert broom that the quail nested beneath, and then a Yellow Warbler flew into the weeping acacia tree! Proving once again that backyard birding can be pretty exciting at times!

So, who is the bird in the above photo on the purple hummingbird feeder? I believe it is a juvenile Hooded Oriole due to the thin, de-curved bill, the yellow belly with a gray back, and the double wing bars. If you look closely at the photos you will see it still had a bit of downy feathers poking out. Perhaps it is time for an oriole feeder?