Notes from my Nest: A New Quail Brood 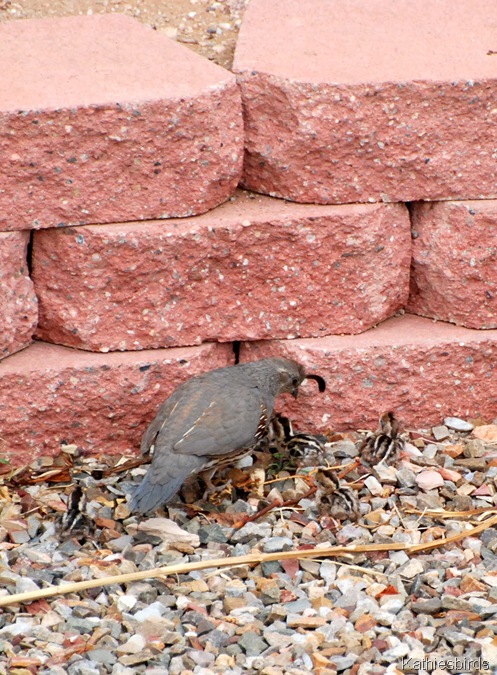 Sunday, August 4 was a muggy, gray day without a breath of coolness anywhere. I had just returned from a camping trip in the White Mountains of Arizona when I noticed some motion in the backyard. This was different than the typical songbird motion, so I grabbed my binoculars to get a better look. “Oh No! They’ve done it again!” I exclaimed to my husband. “What,” he asked? “The quail have a new crop of chicks,” I replied! Then I grabbed my bins and camera and headed for the upstairs balcony. Right before I left for Connecticut a pair of quail had nested under the desert broom in my back yard and tried to raise their little family. Back then I was delighted until I realized the birds were basically trapped in my backyard and easy pickings for the neighborhood Cooper’s Hawk. After three of the 4 chicks were picked off the parents abandoned the last little chick to fend for itself. I tried my best to take care of it, but when it came time for me to leave there was nothing I could do. My sweet and very patient husband spent the whole month filling a saucer with water and tossing seed on the ground for the little chick even though he never saw it. When I returned after a month the little chick was no where to be found. I never did find out what happened to the little orphan. Now, I feared we were if for the same thing, even though I was delighted to see the little babies. 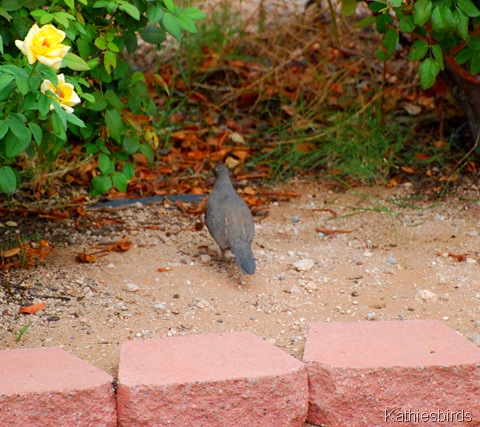 My back yard is set up with a little terrace in back where there are rose bushes and a few trees. Beyond this the yard rises steeply and is covered in rip rap. The back of the yard is fenced in with a 5 foot block wall and against the back wall a wild desert broom managed to take hold and grow to an enormous size. It is here the quails built their nest and when the little chicks hatched the parents led them down the steep slopes, across the raised bed and into the flat yard below. This is all well and good until the parents want to go back to the nest. Then there is trouble! While mom and dad can easily hop back up the three block height… 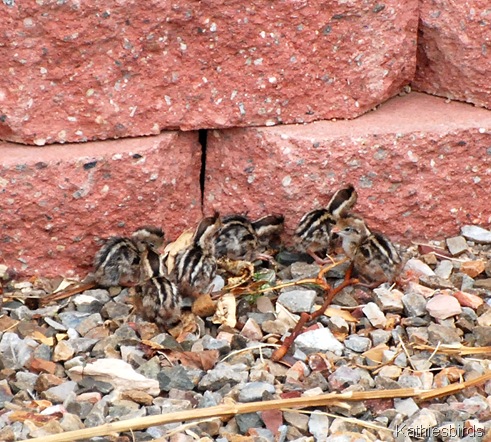 …it is far too high for newly hatched chicks the size of pebbles! 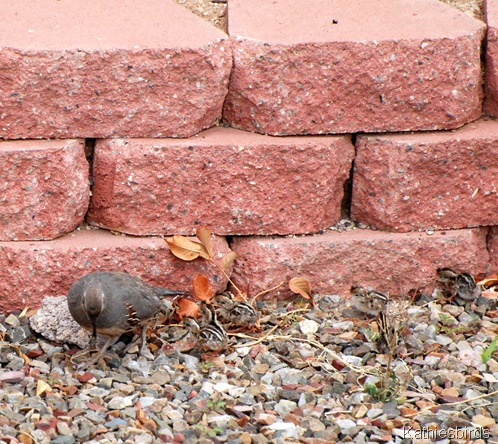 Come on little chicks! You can do it! 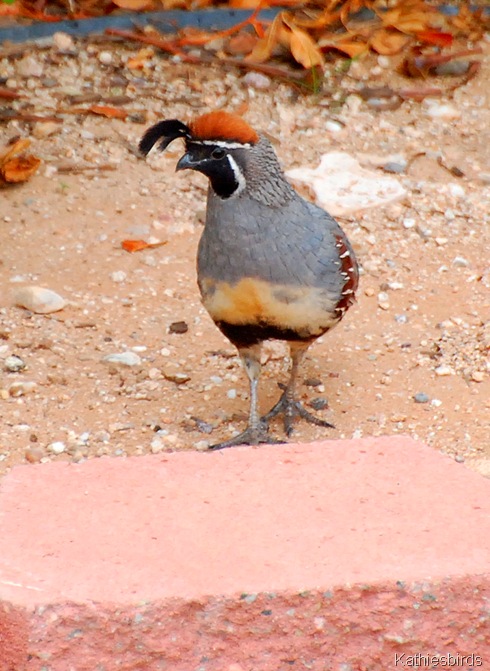 Daddy encourages from above. 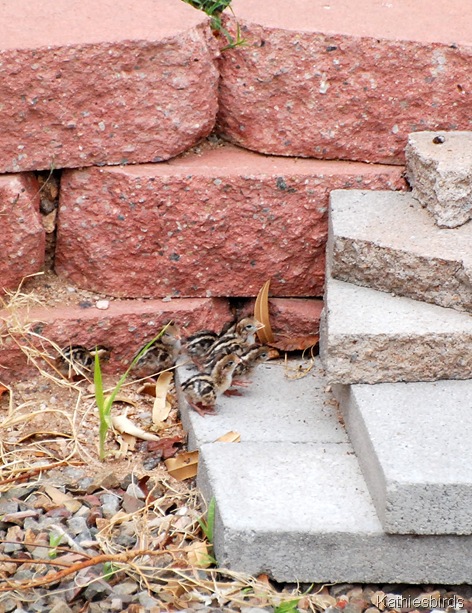 Maybe we can get up this way? 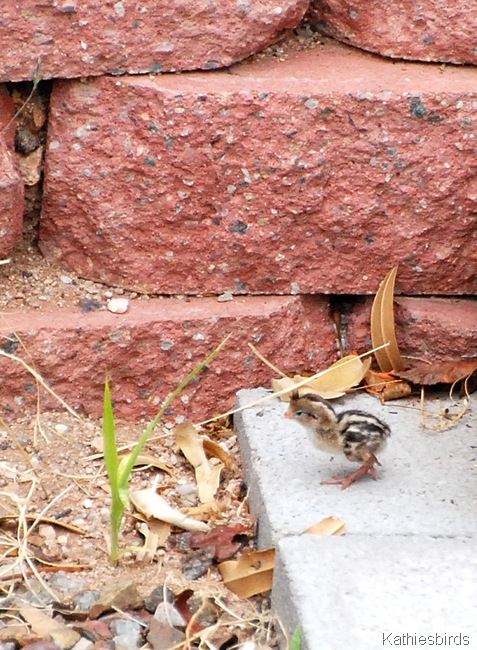 And we’re too little! 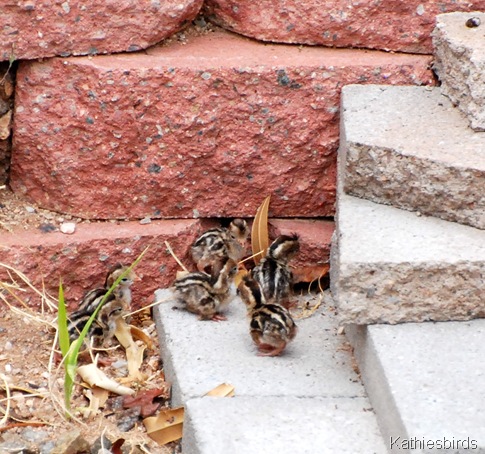 Maybe we should try again? 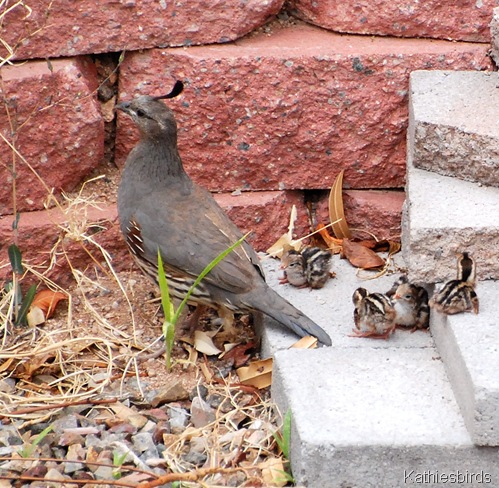 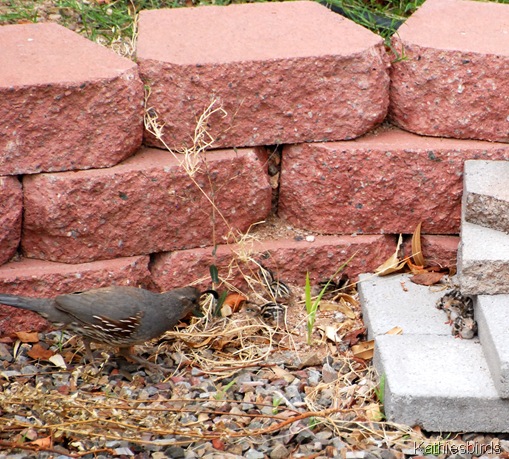 I think we need a rest first! 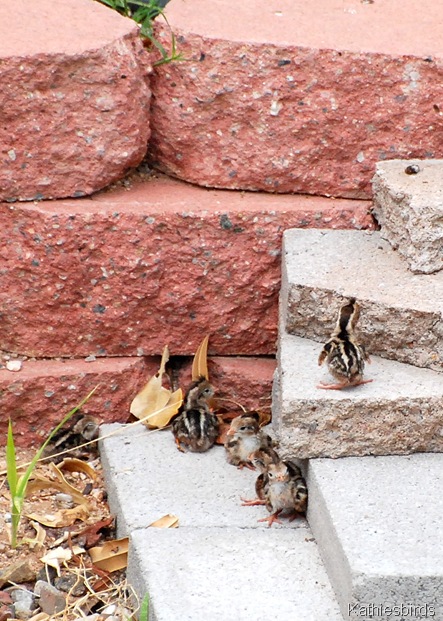 Then one brave chicks finds the way! 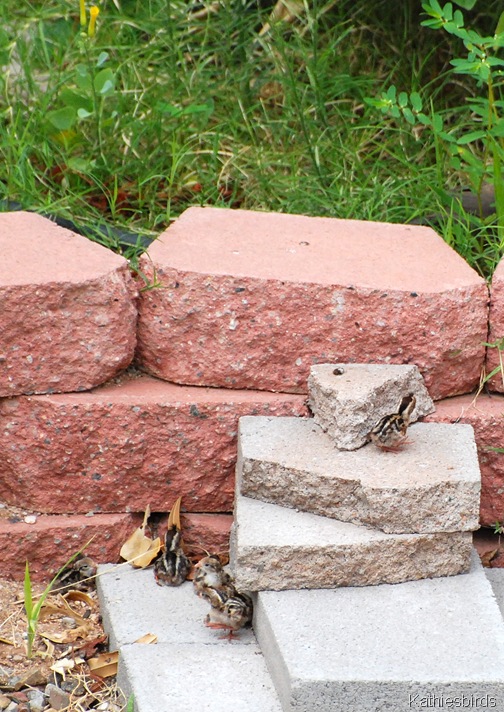 Up the stairs it goes! 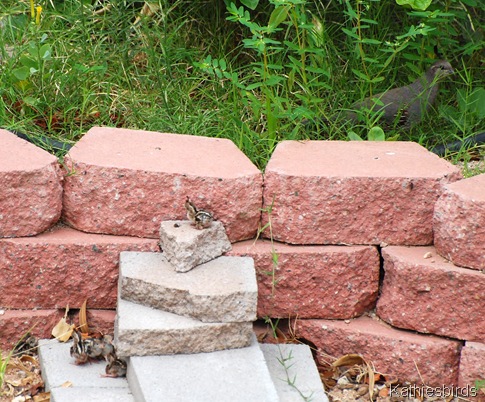 Almost there! Do you see Mamma in the corner up above? 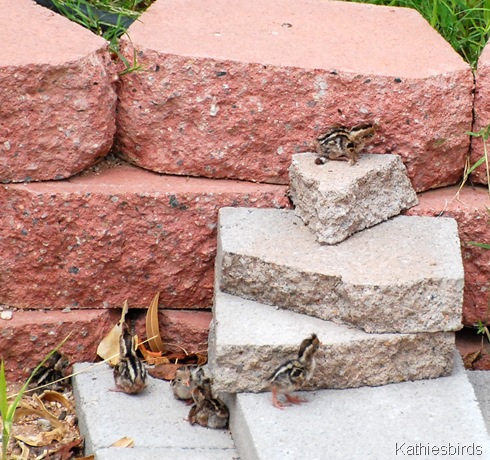 Another chicks tries the steps! 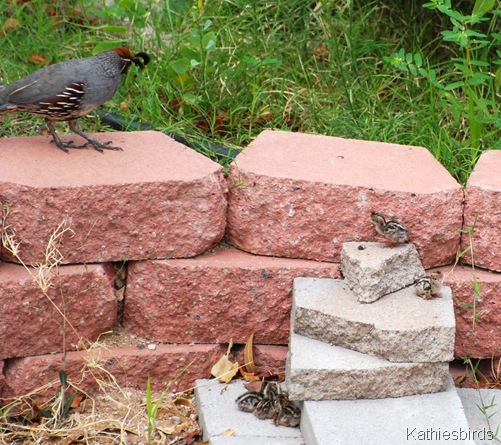 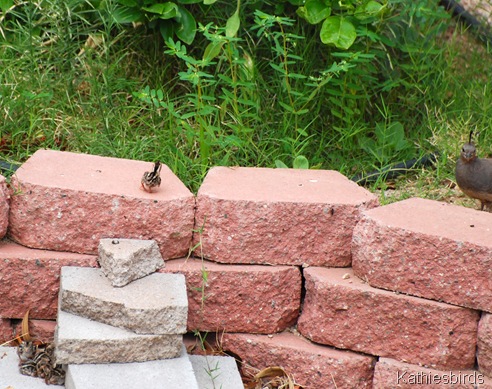 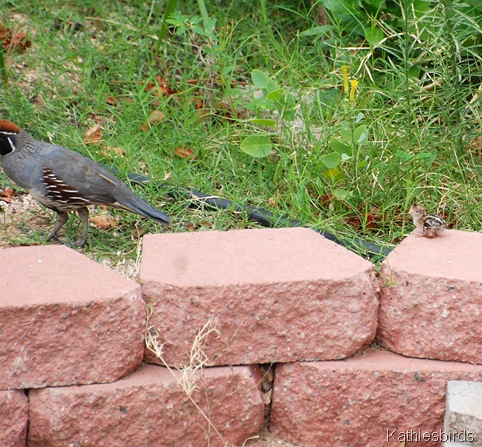 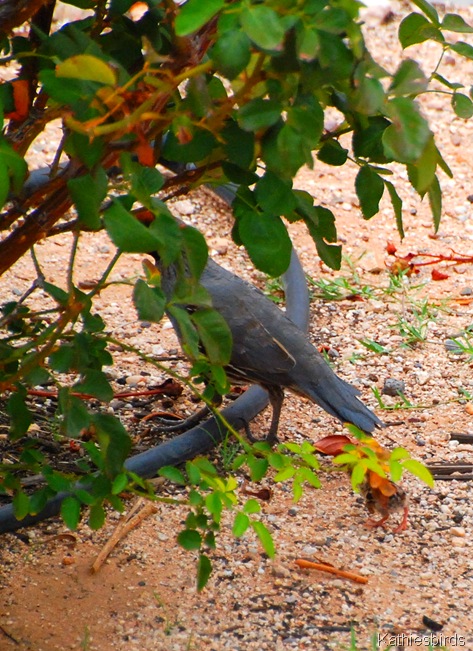 Under the rosebush and into the shade! 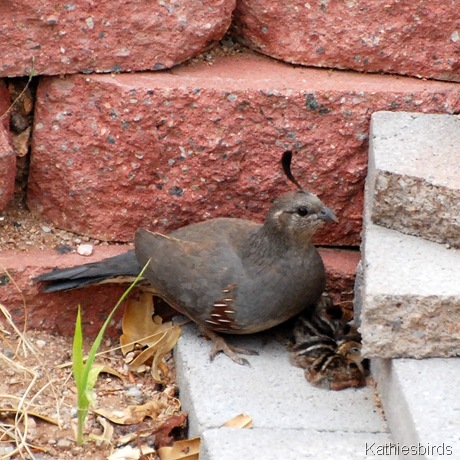 While mamma quail keeps watch over the other five below!

After watching and photographing this drama I couldn’t stand it anymore. I put my camera down and ran downstairs. The trouble was, the stairs I had built the last time were not working so well for these newly hatched chicks who kept trying to get up the stairs from the sides. I had constructed the stairs so the chicks could enter from the end. I had watched as the little chicks jumped and hopped, exhausting themselves in the heat. Now I walked slowly out to the back yard and to rebuild the steps. As I got closer I saw that all but one chick had made it up top. The last little chick lay exhausted on the steps. I gently picked it up with my hand and placed it on the terrace above. At first it didn’t even move and I feared it was going to die from heat exhaustion but suddenly one of the parents called and it got to its tiny pink feet and ran off under the bushes.

I now set to work rebuilding the steps. If you look back at the photos above you will notice that one gray brick lies perpendicular to the wall. I took that tile and turned it parallel to the wall, then replace the other smaller ones on top. After that the chicks had no trouble getting up and down the steps. Anytime I opened the door they would scamper for the steps and climb back up! It’s been two weeks since they were hatched and so far five of the six are still alive. They have grown pin feathers in their wings and tails and yesterday I saw one of the chicks fly for the first time! I have high hopes that this brood will make it and one day leave my yard by flying up on the wall and following their parents off into the desert! 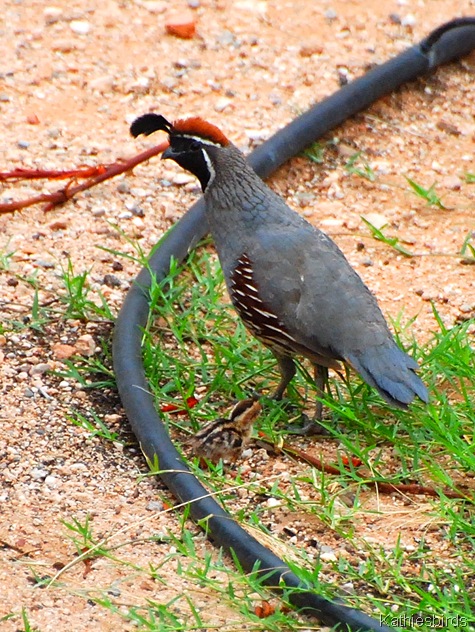 Until then, Daddy is still on guard!

Notes from my nest: As I type this a thunderstorm is rolling in so I will not be able to stay online for long. August has been a busy month with birding in the White mountains, at Lake Cochise in Wilcox, and just this past weekend in Santa Cruz County where Chris and I were able to see the Blue-footed Booby at Patagonia Lake State Park, a first ever record for the state and a Life Bird for both of us. I can tell migration has begun because I have had some unusual birds show up in my yard and in my neighborhood, including a Pacific Coast Flycatcher and a Zone-tailed Hawk seen on a walk, while the yard is filling up with hummingbirds. After being quiet for most of the summer I am now seeing 3 to 6 species of hummingbirds a day and 4 to 8 individual hummingbirds! I am trying to get caught up on all my blog posts so you can expect a post a day for awhile for the most part.

And, as always there is poetry happening at Kathie’s Poet Tree!

8-22-13 Quail Update! The day after this story posted the quail family all flew up onto the block wall and flew off into the desert. I could not believe that those tiny chicks with only pin feathers could fly as high as a 6 foot wall, but they did! I have not seen them since! This is a Happy Ending!