On the Road to the White Mountains 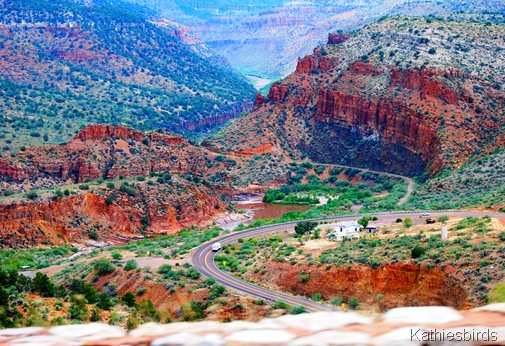 I had no idea that when Chris Rohrer and I planned a trip to the White Mountains that we would be seeing such spectacular scenery along the way! The White Mountains of Arizona are 5 hours and almost 250 miles away from Tucson, but we needed to go there to see certain bird species. Besides, I had never been to the White Mountains of Arizona. When I first moved to Tucson back in 2007 and my then realtor said he was going to the White Mountains on vacation, I thought he meant the White Mountains of New Hampshire! Now I was going to see them in person and I was so excited! Not only did I have high hopes of getting some new bird species on my Arizona Life List, I knew this trip would also cross off two more counties in Arizona for me to bird in. But, trips like this are not cheap, and this was too far to drive in one day and come back, so Chris and I came up with a plan to spend the night and camp. As I had not been camping in over 20 years this would be a real experience for me! I bought a cheap 2 person tent from Wal-Mart. Chris already had his own. Then, full of high hopes, we packed the car and headed north on Route 77 up through Oro valley and the dying mining town of Winkleman. 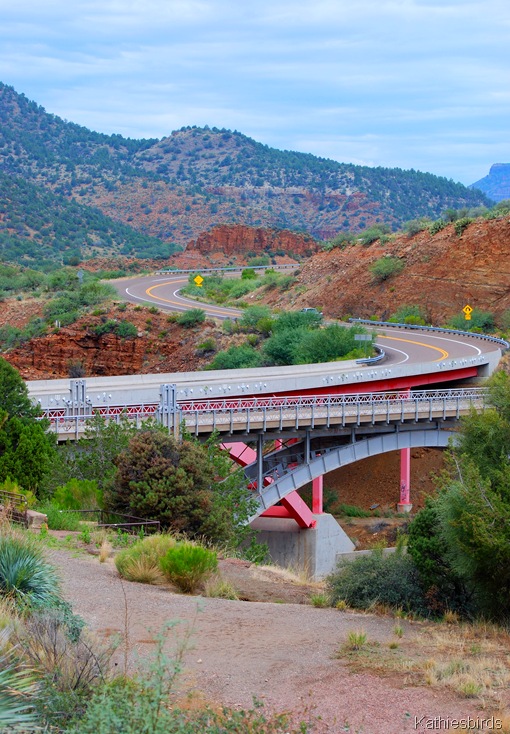 Bridge over the Salt River

Of course the first part of the trip was through the typical desert scrub with mesquite, cholla, and Saguaros. As we headed north from  Winkleman after stopping at a gas station the road continued to climb. Beyond Globe the terrain really started to change, but I was totally surprised by the view that opened before me as we dropped into the Salt River Canyon! All the colors were muted by the gray skies overhead as we pulled off the road to view the Salt River as it snaked between the high red cliffs of the canyon. It was only natural to think of the Grand Canyon as I took in my surroundings. I had no idea this even existed! The pity was, the Rest Area and pedestrian bridge were closed at this location. I was tempted to linger and enjoy the view, but Chris kept me on task and we got back in the car. Our destination was the White Mountains and Chris had a list of target birds he wanted to see. 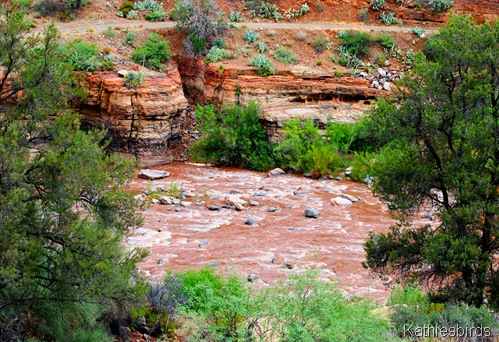 Red rocks and red water in the Salt River Canyon

Little did I know that our last stop in Globe would be the last gas station or restroom for over 50 miles! With a one lane road and steep terrain we literally crawled up out of the canyon and onto the Mogollon Rim (pronounced mo-gee-on). Soon we arrived in the town of Show Low where ponderosa pines towered over the edges of the roads. we were now in Navajo County in the White Mountains of Arizona. Once again I was struck by the change in vegetation and the beauty around me, but we had no time to linger. We had to find birds! However, our first stop to look for birds was not in a National Forest, it was at the Safeway in Pinetop where Lewis’ Woodpeckers were reported to have been seen. While I have seen Lewis’ Woodpeckers before at Reid Park in Tucson, this would be a Life Bird for Chris. 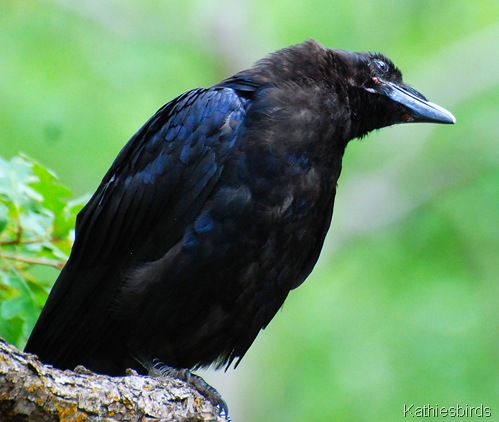 So, we parked the car in the Safeway Parking lot and started our trek around the backside of the strip mall. With the long brick building on our right and a pine covered gorge on our left we walked the asphalt strip behind the store. A small creek tumbled below and the air was cool and dry at 75F! Such a relief form the heat and humidity of Tucson at the moment! We head and saw a few doves and house sparrows. In a nearby tree a young raven watched us curiously. When a hummingbird flew by we stopped to watch it. We scanned every tree with our ears alert, but we did not find the Lewis’ Woodpecker. 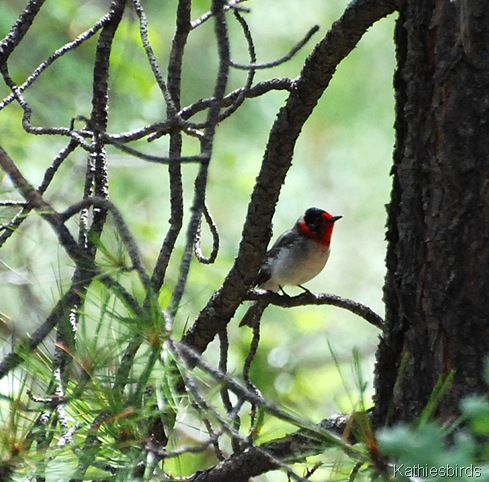 However, as we reached the far eastern edge of the parking lot we suddenly spotted movement in the trees. Here we found a red-faced warbler feeding in the branches, as well as an Acorn Woodpecker! This was only my second sighting of a Red-faced warbler and the only one on this trip, so who would have guessed it would be found behind a grocery store in Pinetop! After realizing we weren’t going to find the Lewis’ here today we bought some more ice and a few other things form the store and continued out journey east on Route 260. 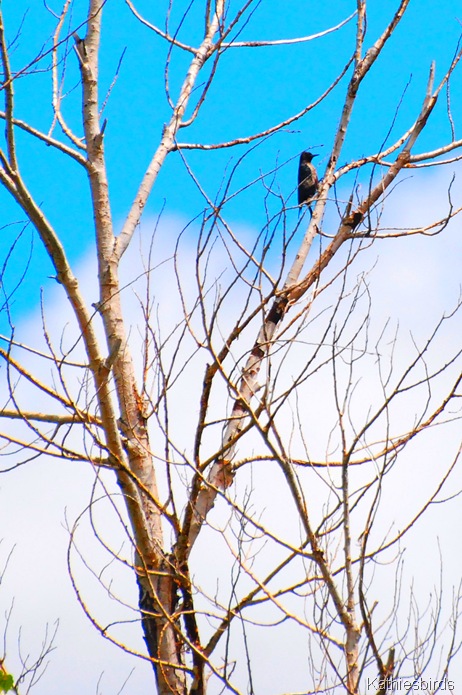 I was driving at this point but keeping my eyes open for birds along the way. when I spotted a dark bird at the top of some dead trees I pulled over and turned around. A short drive back to a nearby parking lot revealed not just one, but a whole family of Lewis’ Woodpeckers living in a stand of trees in a vacant lot in Lakeside! Chris jumped out of the car first, camera in hand, while I got myself together and soon followed him into the dusty lot. High overhead the woodpeckers flew and moved among the branches. we counted at least 4 different birds in the one location. So, while the Lewis’ weren’t at the grocery store, at least they were still in town! 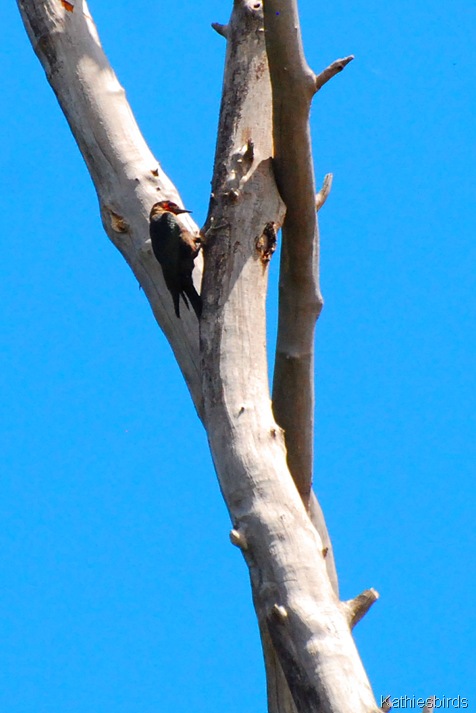 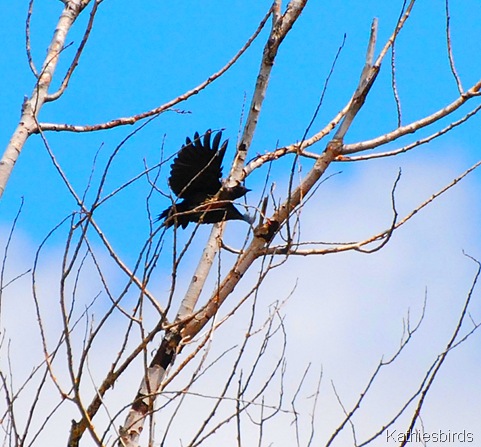