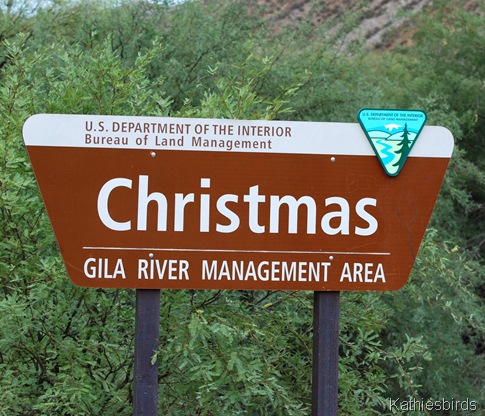 It’s August 2, 2013 and Chris and I are headed south on Route 77 after camping and birding in the White Mountains. The rain chased us down off the Mogollon Rim and it was only when we were south of Globe that the clouds started to break up and the rain ceased. We were both bemoaning the fact that we did not get to bird for very long in the White Mountains and so missed many of our target birds. As we come down a steep slope just a few miles north of Winkleman I spot a dirt road that leads down to a riparian area along the Gila River. On our way to the White Mountains on Thursday I thought I had seen a hawk hanging out in the tops of the cottonwood trees as we rushed by. Chris had mentioned how he would like to explore this area then, and we both were thinking it now. Though it is late afternoon, we still have time, so I turn off the highway and drive down the steep hill to the parking lot. I thought it was just going to be some little by-way made by the locals. To my utter surprise I saw a Bureau of Land Management sign designating this as a public access point along with restrooms, trash cans, and picnic tables! 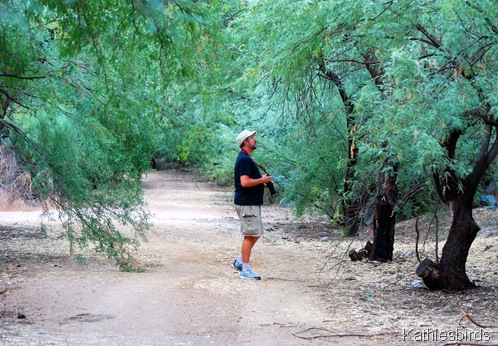 Chris and I did not know what to expect but we eagerly get out of the car and head for the trees. Overhead the tree canopy closes in like a feathery green roof. Beneath our feet the earth is a gray powder made of silt, soil, and dry cow dung churned and trampled by numerous cow hooves. That’s right, we are in open range and there have been cows here…recently. I am an old farm girl from way back and I know enough to be leery of range cattle…especially the bull! This put me on alert even as a deep stillness envelopes us. 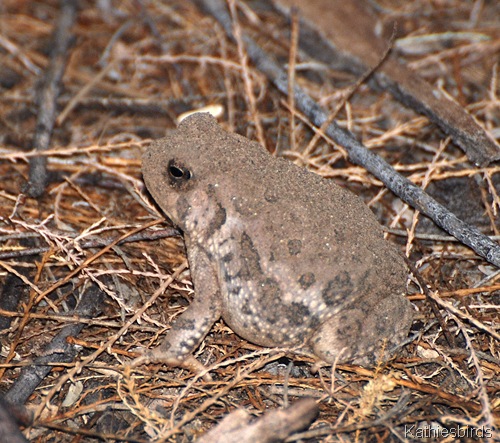 We hear birds singing and calling everywhere. Beneath our feet we find a small toad in the detritus of the bosque. A brief shower pings us with fat rain drops, then passes by. We seek shelter under the tangled branches and keep our cameras dry. 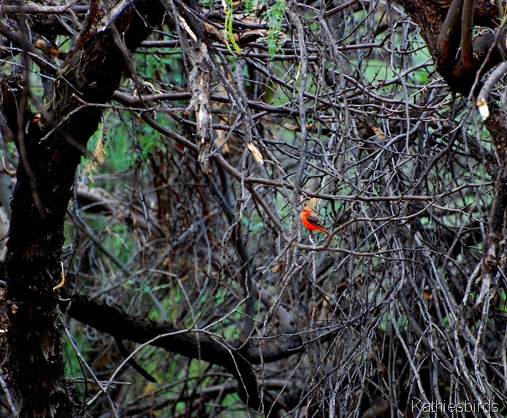 A soft, green-gray light mutes the colors of everything, including a Male Vermillion Flycatcher! We come out of the mesquite bosque and onto a dirt road that ran along the cliffside. 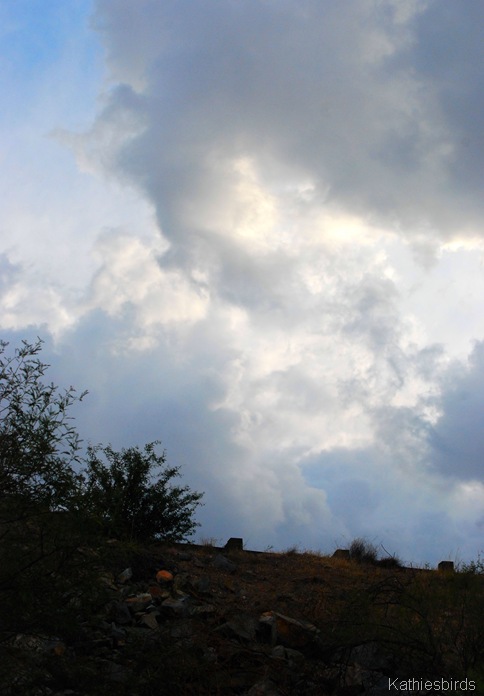 But we follow a song down the green tunnel… 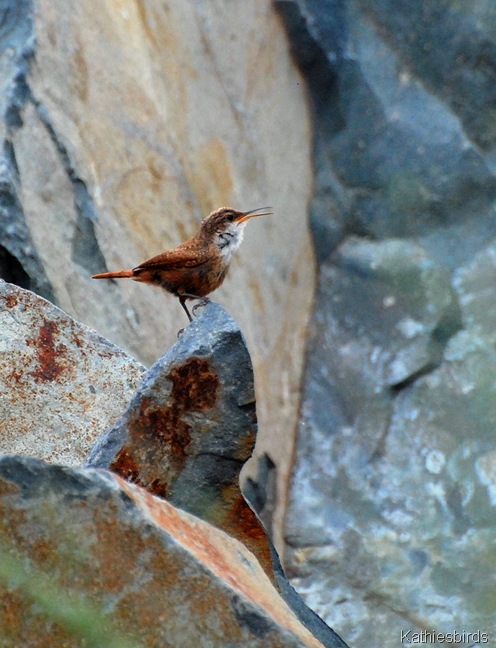 to where a Canyon Wren sings on the gray rip rap! 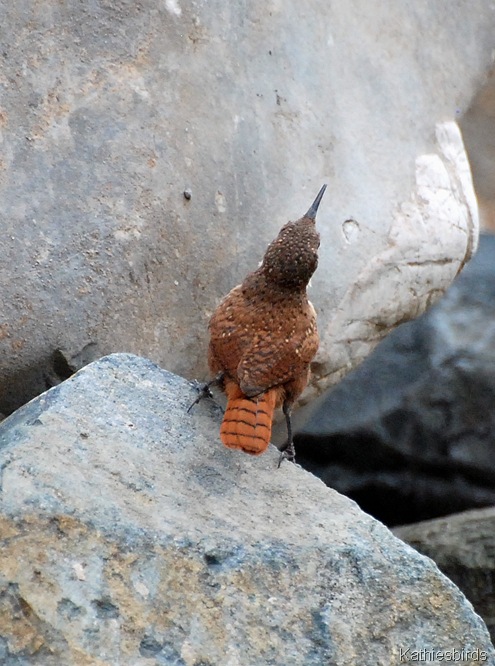 In-between songs it searches for insects, 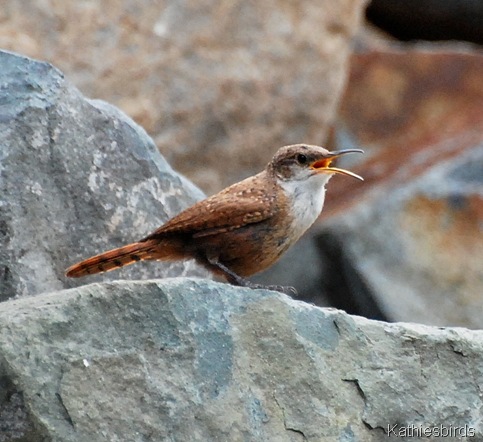 Then starts to sing once again! 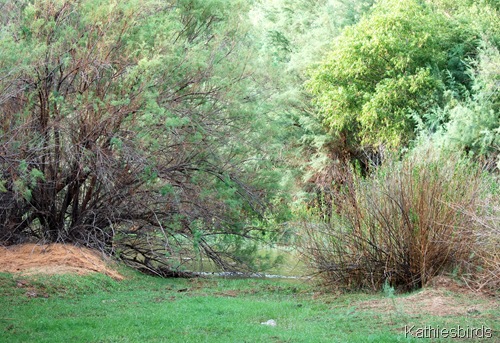 Down the path we go to the lush green river’s edge. 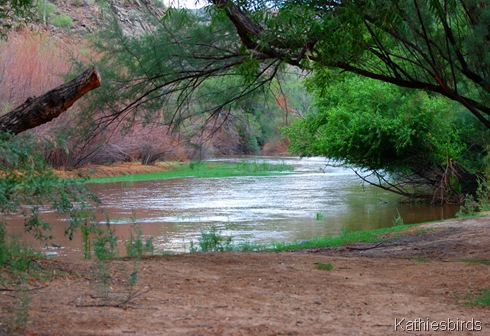 Here the brown water cuts into the earth and twists around the bend. 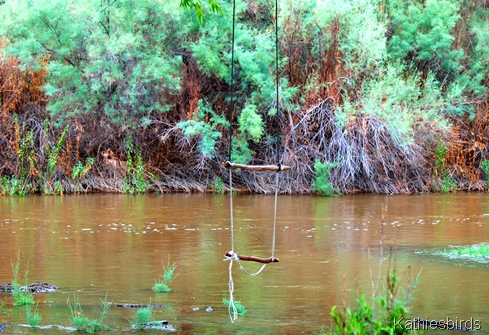 An empty ladder swing tells its own story.

And then we hear a cry down the river, but growing louder by the minute until… 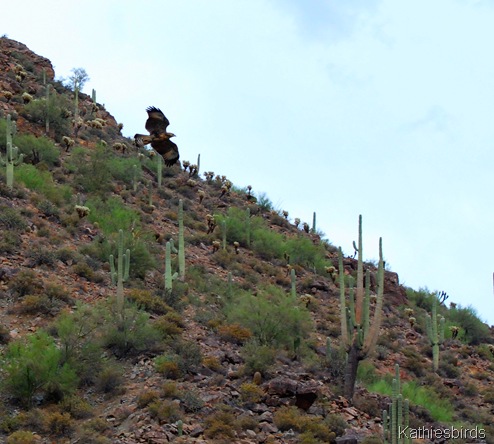 ..with cameras raised and eyes on the sky, we watch a juvenile Black Hawk fly into view! It circles over our heads and lands in a tree across the river, then takes to the sky and flies back to where it came from! I thought I had seen a Black Hawk from the road above as we had driven by yesterday. Now I am quite sure I did! Black Hawks nest and feed along rivers in deep canyons. We are in the perfect habitat for them! Here by the river we see kingbirds, cardinals and even a Blue Grosbeak! As we head back to the car a lone cow emerges through the trees in the shade of the mesquite bosque. It blinks at us benignly as we walk by. Once back at the parking lot an Ash-throated Flycatcher lands in a nearby tree. With 21 species on our list for this location, we feel like we had indeed found Christmas in the desert in August! But we are not done yet! 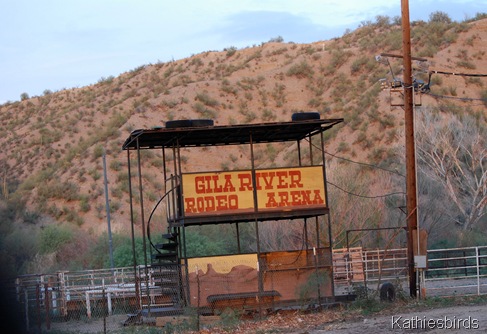 As we drove into Winkleman Chris suggests that we check out the ”town” park. The place looks old and decrepit. I am a bit reluctant to drive down in, but as we did we actually pass a town policeman driving out! And then, we see birds! So many birds! We couldn’t look or count fast enough as sparrows and woodpeckers, kingbirds and flycatchers flew all around us! Here there was a warbler, there there was an oriole! Look! Look! See! See! Birds were everywhere in this forgotten land. While we drove past old brush piles and broken down fences we kept stopping the car to count birds. 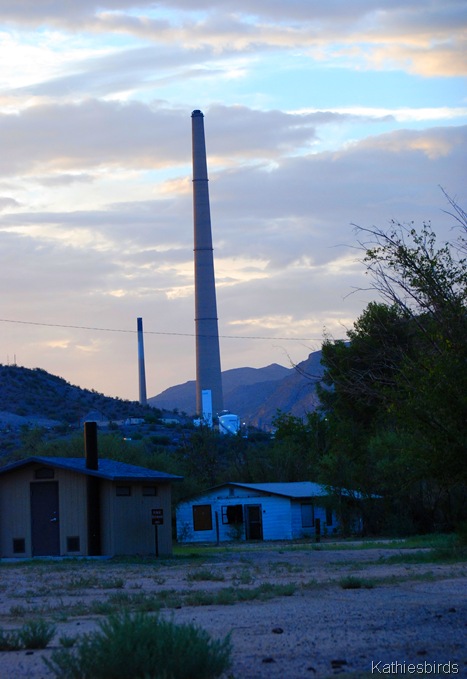 Believe it or not, there are actually restrooms and a playground here, plus a campground for anyone brave enough to camp here! The Gila River curves around the park and flows under highway 77 west towards Florence and Coolidge with the Casa Grande Ruins along its banks. I found out later that this location is actually an eBird Hotspot called Winkleman Flats and Pedestrian Bridge. 122 species have been seen at this location. (Just click on the link to see the eBird Bar chart of species.) Chris and I saw 20 species here tonight. I also nominated Christmas to be yet another eBird hotspot. We will see what happens with that. 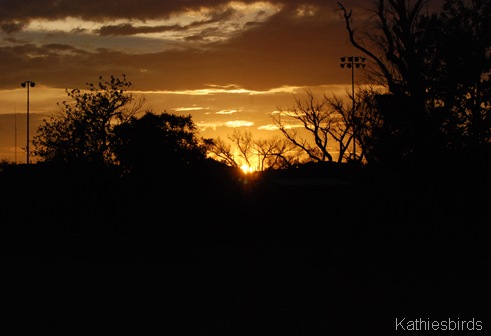 Meanwhile, after being a bit discouraged by getting rained out of the White Mountains, Chris and I were now smiling as the sun set on a great day of birding!

Birds seen in Christmas and Winkleman Flats and Pedestrian Bridge on August 2, 2013: