Back to the Birds in Central Park 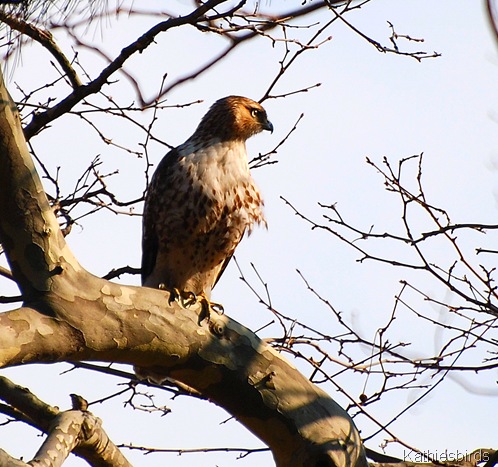 On the afternoon of March 12, C—and I returned to Central park. We went in search of Long-eared owls which had been sighted somewhere near the Arthur Ross Pinetum. I used eBird’s View and Explore Data tab to locate them. I have only seen Long-eared Owls once long ago when I lived in Colorado. I remember where I saw them, but not the exact date, so I do not have them on my eBird life list yet. It would be a wonder for me to see them today. As we near the park near  West 85th Street we see a red-tailed hawk flying over the tree line. It soon lands in a Plane Tree and scans the park with a watchful eye. We see this bird from the sidewalk before we even enter the park. Before me are trees, grass and water, while behind me the cars, taxi’s and trucks are rushing by! 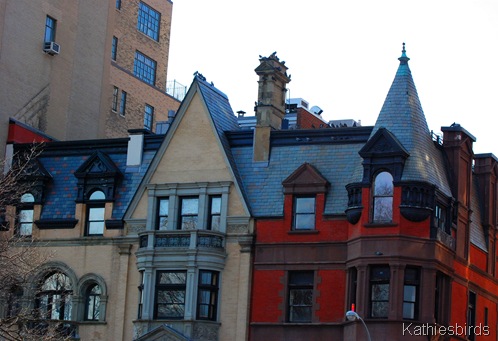 Across the busy street of Central park West the pigeons roost on gorgeous New York Architecture. 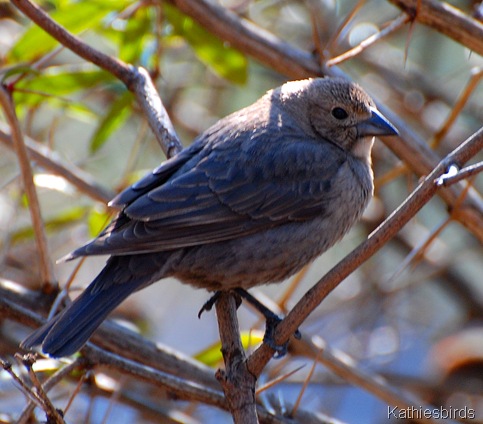 As we enter the park we see someone walking the sidewalk and tossing seed to birds. In the collection of house sparrows and other birds I find Brown-headed Cowbirds feeding.  Species #38 for my New York Life List! 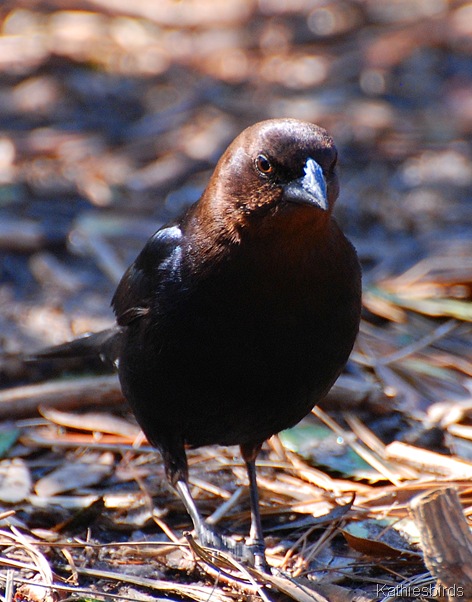 We walk up to the Pinetum and scans the tree trunks for owls. The tall pines sway overhead while below people walk, run, and play. The warm temperatures have brought everyone out to the park. We soon realize that if those owls were smart, they probably flew away. I know if I knew who to ask, some birder could tell me exactly which tree to walk up to and look up and I would see them, but I do not know who to ask, ask so we move on. 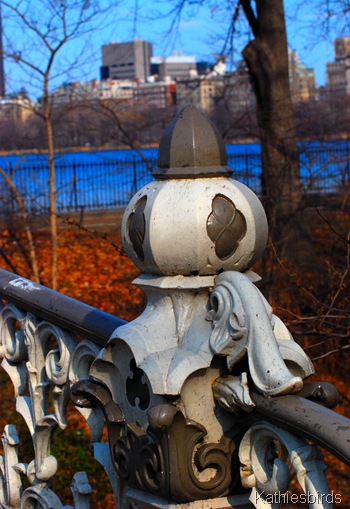 Detail on bridge over the 86th St. Transverse Road

We are headed to the Jacqueline Kennedy Onassis Reservoir next for I am sorely lacking in ducks and shorebirds on my New York Life List. I can just see a little peek of blue through the trees as we cross over. 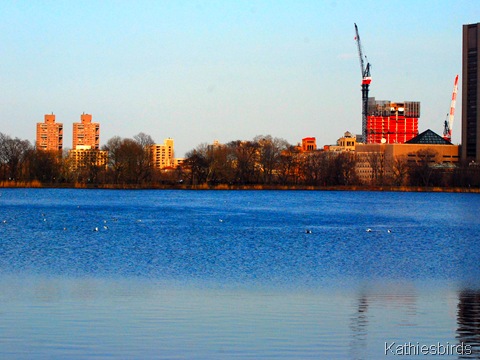 Once there we go to the edge of the iron fence that surrounds the reservoir. Apparently a track encircles the whole thing and many people use it as their running trail. C—also informs me that the traffic flows in one direction that switches with the day. Today it has a counter-clockwise flow and we enter the stream of bodies that way. 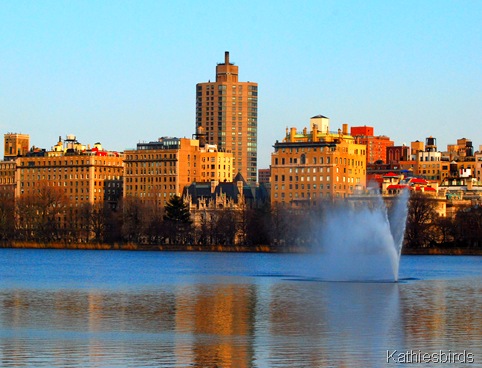 But not before stopping to take in the skyline and see what can be seen in the water. I spot about 50 gulls out in the middle, most too far away for me to identify with just my bins. But I can pick out a few Great Black-backed Gulls # 39, as well as Ring-billed Gulls # 40. Lesser Black-backed gulls have been spotted here, but I cannot tell if any of these are them. Out in the middle of all the gulls I see a small duck diving. Its white crest contrasting with a black upper body and white belly are clearly visible. I write a Bufflehead #41 on my pocket pad that I always carry with me when I am birding. Other than that, I am not seeing many ducks but, then I spot a collection of birds floating to my left. I have to walk a few paces against the flow of traffic to see them better and get a picture. 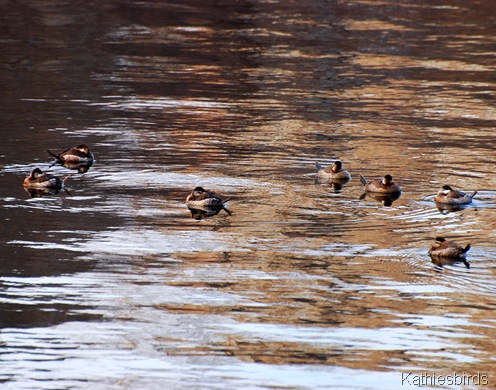 It is a small flotilla of napping Ruddy Ducks, species #42. They are not in breeding plumage at the moment but the males will soon change to the brilliant rusty color the species is named for. To me they are a comical duck species when in full breeding plumage as the males develop that rust-colored body and blue colored bill! They maintain that white cheek patch which really gives them a clownish appearance. Here in this photo, if you enlarge it and look closely, the males have a white cheek patch and the females have a brownish face with a dark cap and a dark line running through their eye. I suppose you could think of it as the females have eyeliner on! Right now they all have their beaks tucked into their wings for their naps but you can still see that stiff little tail poking up into the air. Ducks are divided into two categories: Dabbling Ducks, like Mallards; and Diving Ducks, like these Ruddys and the Bufflehead. Diving Ducks dive beneath the surface for food while dabbling ducks paddle about on the surface of the water sifting food through their bills. They are the ones you see up-ended with their butts in the air! 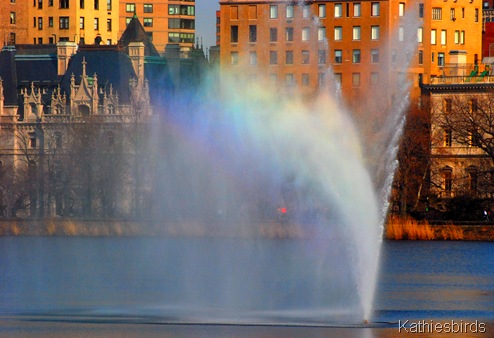 We finally start our walk counter-clockwise toward the east side of Central Park. As we walk along I do find a few Mallards sleeping along the embankment. Out in the middle of the reservoir the fountain sprays exuberantly. Overhead the sky is somewhat overcast but in the east the sun is breaking through. In this low  light the water refracts into a rainbow while casting a golden glow over the buildings beyond. 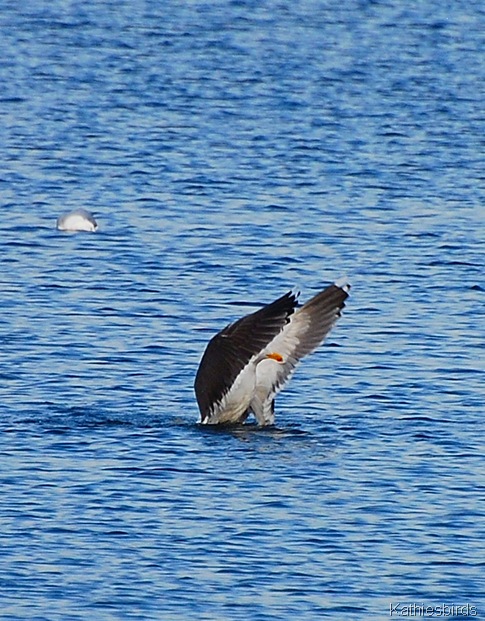 I like the way the wings of this gull are as it lands on the water. What amazes me later on when I am reviewing my photos is the way the water spray from the fountain seems to mimic it! 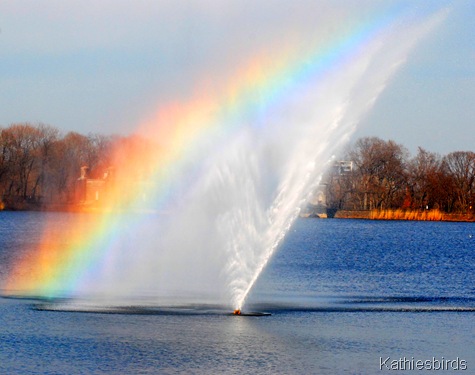 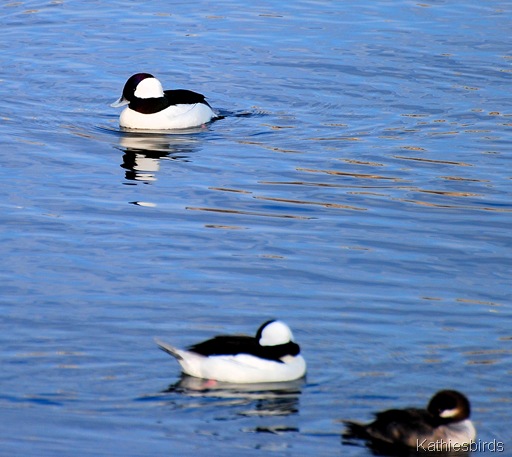 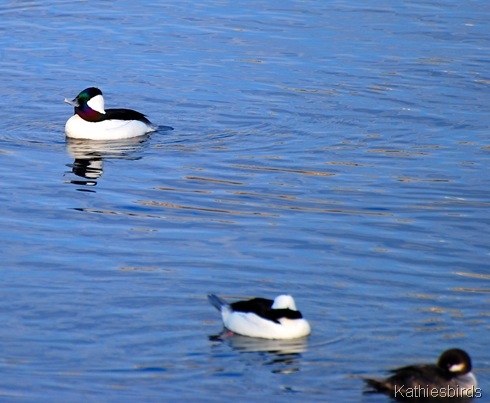 Can you tell the difference between the female Bufflehead in this photo (bottom right corner) and the male Ruddy Duck that’s in non-breeding plumage in the photo above? Scroll back up and give it a try! This is just one of the many challenges of birding. 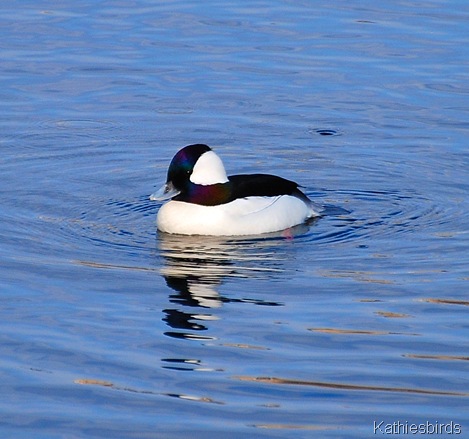 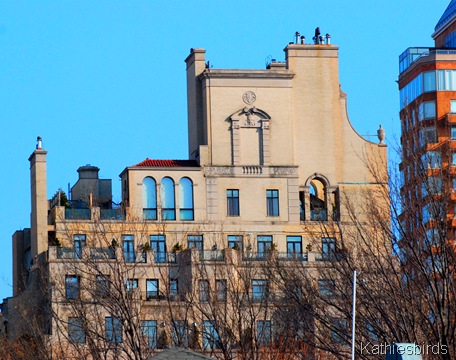 And always the buildings tower over the park. 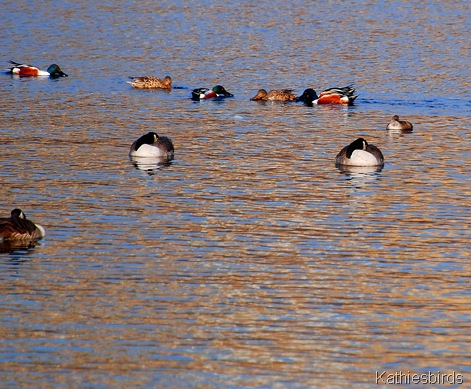 As we round a little bend on the track a bit of a hidden cove comes into view. To my great delight I spot some ducks and geese! Finally! Northern Shovelers, #43, are paddling around skimming the surface with their beaks and straining out food. The Canada Geese float lazily but what is that little fluffy thing in the middle of all these ducks and geese??? 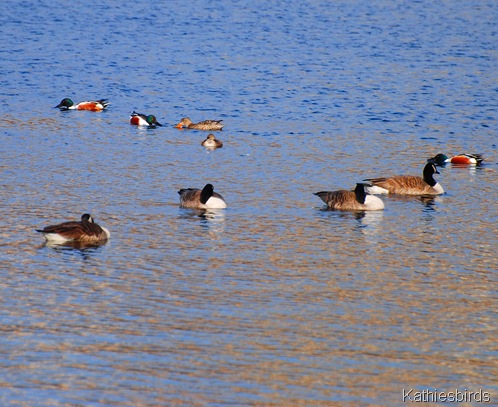 There is definitely something different out there. Is it what I think it is??? 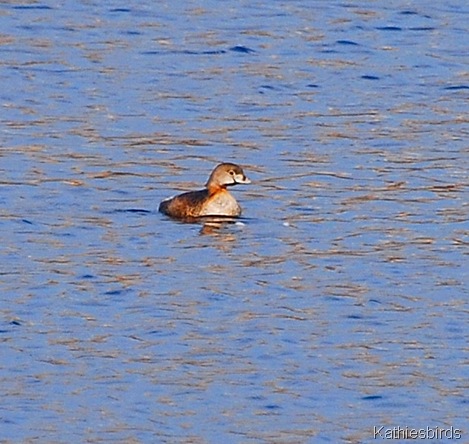 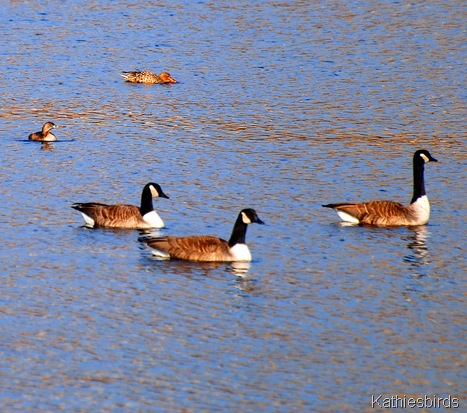 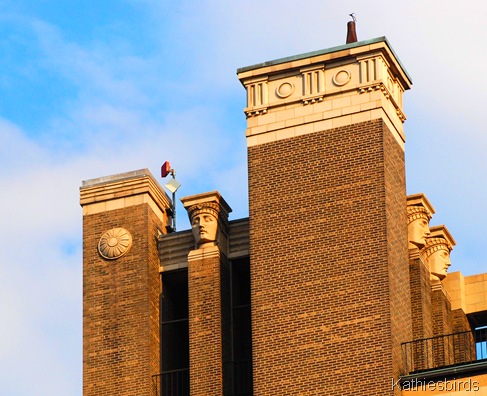 It is late afternoon now and we are both getting tired and hungry. We decide to end our walk around the reservoir and head back to the apartment. When we stop on the east side of the park I look up to see this building with these Egyptian looking faces that appear to be staring down over the city and keeping watch.

It has been a good day birding in The Park. In this one day I have added 12 species to my New York Life List!

Read Part one of this story: New York City Birding