A Winter Week in CT 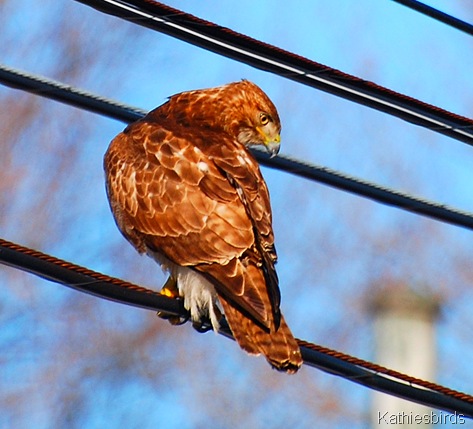 Last weekend was the Great Backyard Bird Count. While I spent the first three days counting birds in Massachusetts, I ended the count in Connecticut where I went to visit my family for my birthday. On the third day, which was Sunday the 20th, I did not count many birds as I spent the morning writing blog posts, the afternoon packing, and the rest of the afternoon driving to CT. On day four of the count I awoke to snow and, though I could not go out and count birds, the snow brought plenty to my Mom’s feeders giving me a list of 14 species. These are the birds I counted in my Mom’s yard:

I counted for 45 minutes. This was the only day this week that I saw the Carolina Wren or the Robin. The rest of the species are fairly regular visitors to her feeders. On Saturday morning before I left I also saw 2 European Starlings and about 5 American Crows. 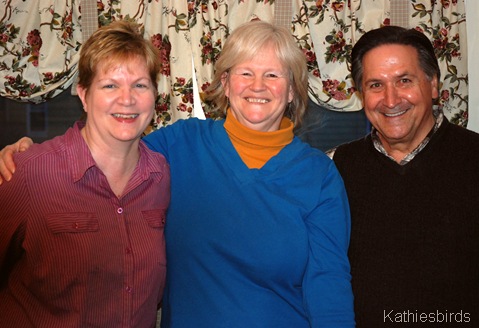 Tuesday was my birthday and my mom and sis took me out for breakfast before we took my mom to the train station in New London where she was boarding a train for Florida to visit family and friends. Her train was delayed and though  it was sunny but very cold I still managed to count a few birds from the Train Station which is right on the Thames River in New London. Across the tracks at the water’s edge a few fish crows called from the tops of poles. Fish Crows and American Crows are notoriously difficult to tell about except by their voices. These were very clearly saying “Un Uh! Un Uh!” I later read something on the internet that said: How do you tell a Fish Crow from an American Crow? Because when you ask a crow if it is an American Crow it will answer, “Un Uh!”

Once Mom was safely on the train I headed to Bridgeport, CT to visit some friends I had not seen in 30 years! Alice has known me since I was 16 years old and Ron met me just a few years later. They were both married to other people at the time but Ron became a widow and Alice was divorced for several years before they reconnected and married each other. Since I knew both of them and their former spouses I was wondering how it would be to see them together but once I was there it all just seemed so natural. I could see the love in Ron’s eyes as he looked at his wife and Alice seemed so happy and smiley! 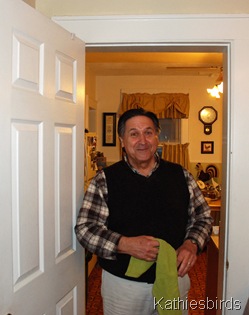 Perhaps Alice is so smiley because Ron does the dishes! Or perhaps it is because of her adorable grandson, Caine! 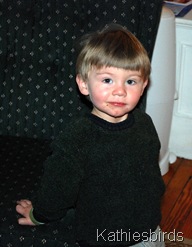 I had a wonderful time and hope to visit them again soon as they live near a population of feral parrots which I hope to see and add to my Connecticut Life List one day! 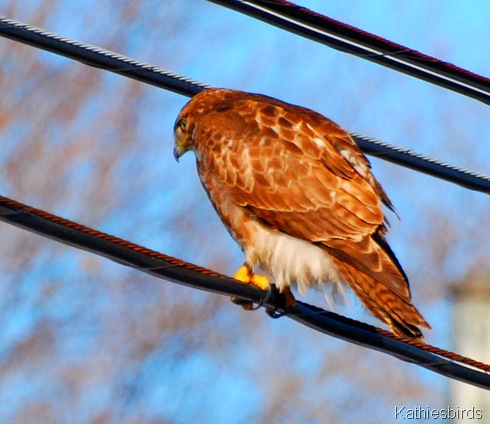 In fact, while I did not count any birds while visiting them, I did count some in the parking lot of Auto Zone on Main Street, Bridgeport where I stopped to pick up some canolis from Del Prete Italian Pastry across the street. My sister found this place on line and told me it was voted the best Canolis in the state! Since it was only about 3 miles from the Donavan's house it worked out perfectly for me to stop on the way. As I was walking back to my car with the canolis I noticed this hawk sitting on the wires over the parking lot. the street below was puddled with snowmelt and on the Auto zone building itself some fish crows sat and scolded the hawk. Though my path brought me closer to the hawk it did not flee but rather seemed intrigued with something on the ground below. I opened the back of my car, put down the canolis and grabbed my camera. a few quick shots, a glance to see what other birds where in the vicinity, and I was on my way! It was only later when I entered the bird count into eBird that I discovered this was my first bird count for Fairfield county, CT! With Fairfield County now captured I only have one more of Connecticut’s 8 counties to count birds in! However, I still have not seen that elusive 107th species in the state that will put me over the top as far as having counted more birds in Connecticut (a state I have lived in) than in West Virginia (a state I only visited for a week as part of the New River Birding and Nature Festival which is coming up real soon!) 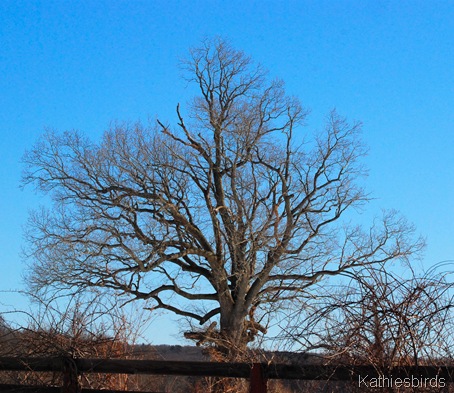 On Wednesday I tried to go out birding again but it was all cold sunshine and few to no birds. My sister drives a school bus and in the spring and fall se regularly sees Bald Eagles in this tree on Norwich Avenue in Colchester which is across the street from Savin Pond. Ever since I loved back east last fall I try to drive by this spot but have yet to see the eagles there. right now the pond is frozen solid and I saw no birds here at all on this day. 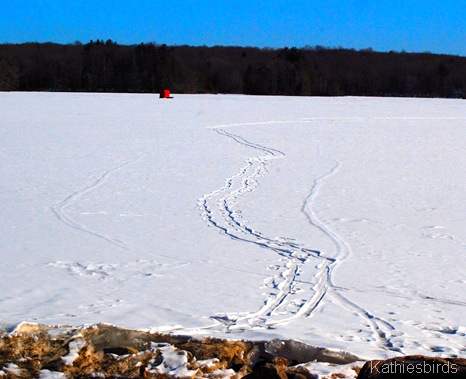 So, I drove on to Camp Moween rd and Red Cedar lake where I hoped I would see SOMETHING. Though there were a few titmice and chickadees in the surrounding trees, the rest of the lake was empty and silent save for a bright red tent used as a shelter by ice fishermen.

I had much more success on Thursday afternoon when I went with my sister to get my hair cut at a friend’s house in Amston, CT. Her home is located in a wooded area with a pond below her house. She has put out bird feeders and in the hour that I watched birds there I saw 14 species of birds including 4 varieties of woodpecker, though no Pileated I am sorry to say. I also saw 3 Eastern Bluebirds and yet another Red-tailed hawk!

I had originally intended to head back to Massachusetts on Friday but a rain/sleet/snow storm on Friday kept me at my mother’s house for an extra day. I was a bit anxious as I watched the rain form a large pond in her backyard and the power flashed off, and then on two different times in the morning. Though I was concerned about her basement flooding my mom has a sump pump installed and it easily handled all the water that tried to rush in. I wrote a poem about it entitled In the Backyard the Rain which you can read by clicking on the link. 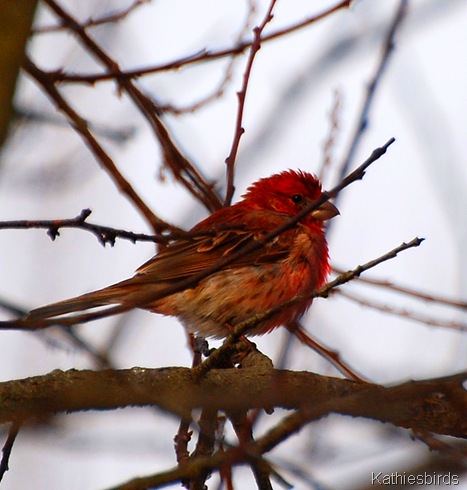 I awoke Saturday morning at 6:30 a.m. and started packing. Before I left I refilled the feeders for my Mom (and the birds!). then, as I stepped out the front door I set my suitcases down and put my camera to my eye to capture these photos of the birds in the tree where her feeders are located. 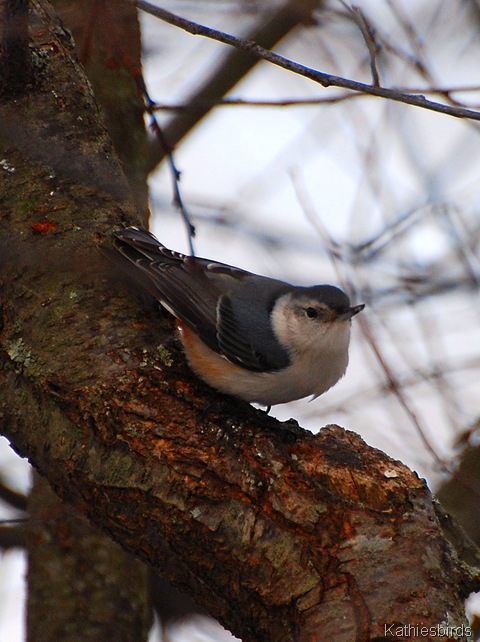 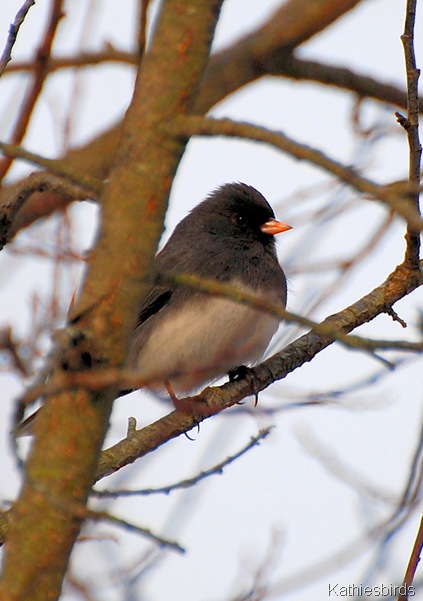 Good-bye for now sweet Connecticut Birds! You know I will be back soon. It is then I hope to find species number 107 and beyond for my Connecticut Life List!