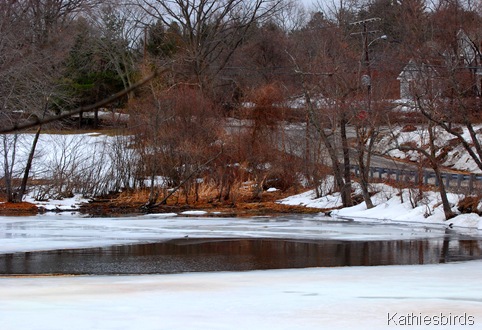 Yesterday before the rain I took a drive to the store. But, before I go to the store, I decide to see how much Lake Cochichewick has thawed. I wonder if there are any ducks on it yet. I see a pair of mallards in a melted section of Steven’s Pond. Near the parking lot for Weir Hill I hear the blue jays calling. I do not pull in and park here, because it is all mud! A little farther up the road I pull off  near the south end of Lake Cochichewick. There the ice-covered lake is melting, and while the section of open water is spreading, I do not see ducks in the water. Later, however, I do see 4 mallards flying overhead. 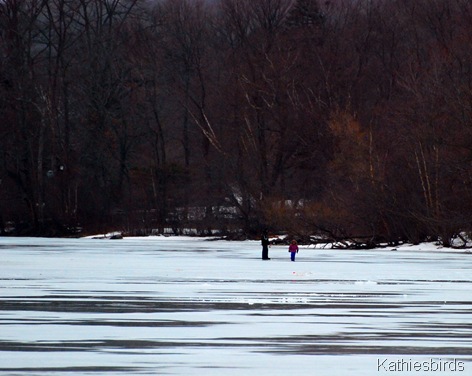 Across the melting lake I see an ice fisherman in a chair on the melting ice and another man walking around on the melting lake with his daughter. I did not know how they could be out there when the lake is melting like that! As I attempt to watch birds, I keep checking on them. However, thankfully, no one fell through the ice while I was watching! I think they caught a fish at one point because there were no gulls to be seen at first and then suddenly this one gull started swooping low and circling over their heads. The surrounding woods are full of chickadees and titmice and I find one Downy Woodpecker, but nothing new. Nothing that says, “Spring is coming, migration has begun.” 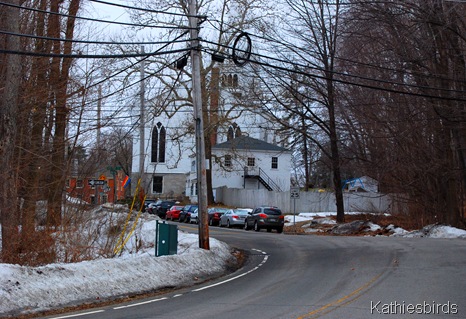 After leaving Lake Cochichewick I head west towards the grocery store. As I drive along Great Pond Road I suddenly hear birds singing everywhere. I pull off the road and park near the center of North Andover. Then, after exiting my car I walk cautiously down the street. This is a busy intersection and so many cars are racing by. It seems everybody is in a hurry to get somewhere. I want to shout, “Stop and see the birds!” but no one would care I think and the gusting wind would carry my words away. 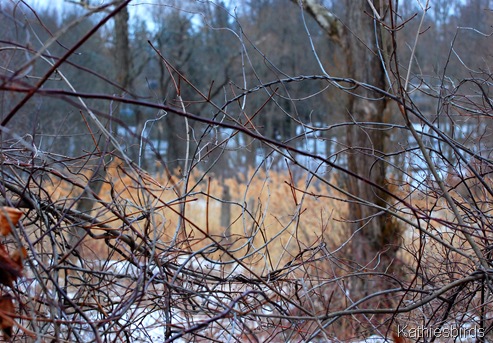 High in the trees above my head I see and hear Red-winged blackbirds. These are my first of the year (FOY) Red-wings and I am so pleased to see them. They are flying from this marshy area up to the tops of pines and maples. I try to get down to the marsh but all I can do is stand on a snow bank and look over the vines and the stones into the marsh beyond. Nearby a flock of house sparrows huddles in the vines and watches me. A Northern Cardinal flies past and disappears into the brush. The shoulder of  the road is narrow to non-existent in this location. Behind my back cars rush by around curves and down hills. I think to myself, I need to find a more private place to watch birds! 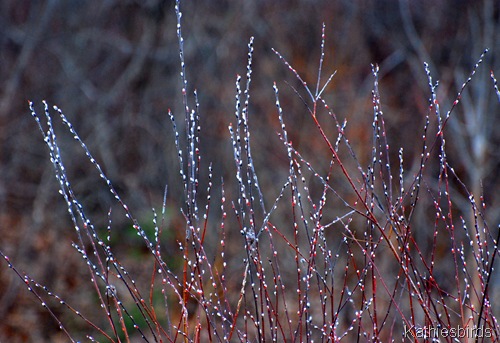 At the grocery store the gray sky hangs like a lead blanket over my head. Seagulls huddle on lampposts and House Sparrows cling to the few saplings in the parking lot. Then I look up to see a medium-sized blackbird flying over my head with a long wedge-shaped tail trailing behind it: my First Of the Year Common Grackle. In the forested area beyond the parking lot fence the pussy willows are budding out. I know spring is coming now. I can see it and feel it, in spite of this raw day pregnant with a storm.

So…why no photographs of birds? Because gray birds + gray skies=gray photos. Plus, most of the birds were too small and too far away in trees and /or brush.